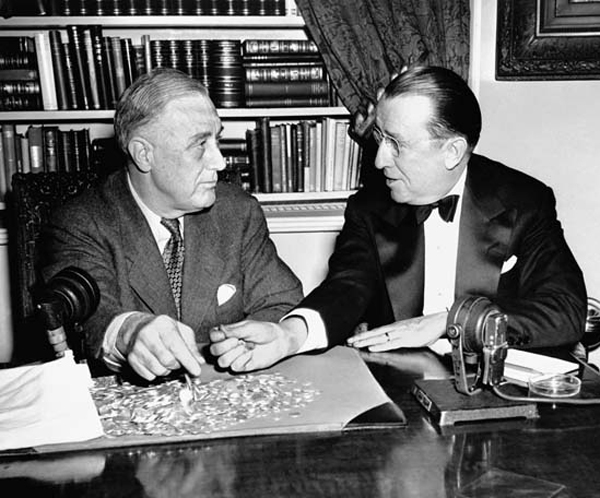 FDR empowered polio survivors and raised public awareness. He helped change American’s attitudes toward the handicapped and set the stage for ending abelism.

This is the story of how Franklin Delano Roosevelt (FDR), Hollywood and the National Foundation for Infantile Paralysis focused the public’s attention on polio and raised funds to defeat “the Crippler.”

Polio: An American Story, by David M. Oshinsky, details the race for the polio vaccine and reveals how it was a distinctively American story and a reflection of mid century values and attitudes.

In August of 1921, FDR was 39 and exhausted. He had just lost the Democratic nomination for vice president, and was worn down from a scandal that occurred in 1919, when he was Secretary of the Navy.

To relax, FDR traveled to his summer home on Campobello Island, in the Bay of Fundy, near Maine. On his way there, he stopped to visit a Boy Scout Jamboree. The day after his arrival, he spent the morning sailing and then raced with his children. They ran four miles and swam in the frigid Bay of Fundy.

That evening he complained of chills and deep muscle aches. By the end of the week, FDR had lost all feeling below his waist. At the time, doctors believed that he had caught polio. Some modern scholars believe that he actually had Guillain–Barré syndrome — an autoimmune neuropathy. It is hard to imagine how different the war against polio would have been without FDR’s diagnosis.

At that time, it was unusual for an adult to develop polio. It was known as a children’s disease that struck in the summer. FDR was probably exposed to the virus at the Boy Scout Jamboree.

However, many factors came together in FDR’s case. He had been overprotected as a boy and not exposed to typical childhood illnesses. This led to him catching many contagious diseases once he left home for school and as an adult. In addition, exhaustion and stress compromised his immune system. Overexertion and chilling from the frigid water probably made his polio more severe.

FDR and his family did their best to hide his disability from the public. Members of the upper class were taught to be stoic and have a stiff-upper lip in the face of adversity. In addition, society was insensitive towards the handicapped, whom they called “cripples.”

“To be crippled in this era was viewed by many as a moral failing, a sign of inner weakness, a character flaw requiring the afflicted person’s removal from normal society…so as not to burden others with a sight better left unseen.”

Seeking a cure, FDR visited a run down health resort in Warm Springs, Georgia. He loved the way the warm water felt on his limbs. The water had high mineral concentrations of calcium and magnesium which soothed his muscles and made him feel weightless. He purchased the resort in April of 1926.

“It was the one place where Roosevelt could truly be himself, surrounded by those who lived and suffered as he did, and dreamed the same dreams.”

FDR wanted to make it into a health resort for other polio patients. He spent nearly all his time at the resort, and a good portion of his inheritance, renovating and upgrading the facilities. He hired doctors and physical therapists. In order to make it sustainable, Roosevelt turned the property into a nonprofit institution. The Georgia Warm Springs Foundation could receive tax-free gifts and charitable grants.

“Warm Springs provided an opportunity to meet people, undertake joint activities, make friends, date, fall in love…New patients were welcomed into the group. Their handicap did not isolate them from the norm. It was the norm.”

Most people doubted that FDR could have a future in politics with his disability.

“He is only 39 both too old and too young for such a fell germ to disable him. He had a brilliant career…Now he is a cripple — will he ever be anything else?”

His mother encouraged his retirement. However, FDR’s wife, Eleanore Roosevelt, and his close friend and advisor, Louis Howe, urged him to continue his political career.

Roosevelt and his inner circle believed it was important to portray him as physically strong. He wore iron braces on his hips and legs and taught himself to walk short distances by swiveling his torso. (video)

He used a cane and was never seen in public in his wheelchair. Many pictures of the era show him standing upright, supported on one side by an aide or one of his sons. The press agreed to never photograph him entering or exiting a car.

However, FDR did acknowledge that he had polio and that his struggles with it helped define his character. His optimism and refusal to be defeated by polio gave the public hope that they too could overcome their problems.

FDR was governor of New York from 1929–1932, for two terms. The Stock Market crashed in 1929. By 1931, the Great Depression had begun, but many politicians minimized the impact. Adopting progressive ideas, FDR ran on a platform calling for aid to farmers, full employment, unemployment insurance, and old-age pensions.

Elected for four terms, FDR served as president from 1933–1945. He saw America through the Depression and World War II. He was well loved and started to change public perception towards people with handicaps.

“Once in the White House, Roosevelt became a potent symbol for polio victims and their families. Like most Americans, they viewed him through the lens that he himself had created: as an inspiring figure who had overcome an illness, not as a cripple with a permanent disability. The mother of a boy in leg braces wrote, ‘Every time I hear your voice on the radio and read about your attitude towards physical handicaps — that they don’t amount to a ‘hill of beans’ — I am strengthened and my courage is renewed…Your life is, in a way, an answer to my prayers.’”

Patients and families of polio victims wrote the White House. They shared their frustrations and pains. FDR replied with upbeat responses and encouragement: “You are making a brave fight…with this fine courage and determination you are bound to win.”

“Writing to the president became a way to share some of the power of his office and to put aside, for the moment at least, the crippling stigma of polio. A letter from Roosevelt changed nothing, and changed everything.”

The president’s charity raised money though Birthday Balls held annually on FDR’s birthday. Local committees organized the events. However, many Republicans didn’t want to contribute to a charity run by a Democrat.

To address this problem, the National Foundation for Infantile Paralysis was formed in 1938. It was nonpartisan. FDR picked Basil O’Connor, who had spearheaded the original charity, to be the director.

Basil O’Connor built his foundation on the corporate model. O’Connor and his personally chosen staff made all major decisions. All plans flowed downward to salaried workers and unpaid supporters at the grass-roots level.

The Foundation had two branches, one dedicated to the year-round needs of polio patients and one for fundraising. Money went towards polio survivors and to fund scientists researching the polio virus and developing a vaccine.

“In 1939, when the first foundation chapter was established…most polio survivors languished in their homes. At a time when less than ten percent of the nation’s families had any form of health insurance, the expense of boarding a polio patient (about $900 a year) actually exceeded the average annual wage ($875).”

Most of the fundraisers were female volunteers, especially mothers. Half of the money went to the national office and half stayed in the community where it was raised.

The March of Dimes

The March of Dimes was not the name of the charity, but the name of its fundraising campaign. The name was made up in 1938 by Eddie Cantor, one of America’s most popular entertainers of the time and a huge supporter of FDR.

“‘We could call it the March of Dimes,’ Cantor said, mimicking the popular newsreel feature, March of Time, that was shown in movie theaters just before the main feature came on. ‘We could ask people to send their dimes directly to the President at the White House.’”

Stars such as the Lone Ranger, Jack Benny, Bing Crosby, Rudy Vallee, and Edgar Bergen made appeals to the public to send their dimes. The result was amazing, 2,680,000 dimes were mailed to the White House, along with thousands of dollars in checks and bills.

Hollywood studios agreed to make short films about polio to show before the main feature. March of Dimes Mothers would then walk through the movie aisles with collection boxes. Here are some examples: Judy and Mickey, and Lucy and Desi for the March of Dimes. “The Crippler” captures the drama of a radio show.

The Roosevelt Dime and Poster Children

The Dime became the symbol for polio and it appeared on the fundraising posters and literature. In 1946, Roosevelt’s face was put on the dime as a memorial tribute.

In 1944, the Foundation was the first charity to use poster children. The children were young and shown with determined, happy looks on their faces. Posters were captioned: “These are some of the Children your Dimes and Dollars helped.”

The race for the polio vaccine and FDR’s public role helped change the status of handicapped people in America. Polio survivors went on to attend college and have careers.

As they aged, some polio survivors noticed old symptoms returning. They formed the Post-Polio Survivors group. In addition to emotionally supporting each other, they became politically active. They worked with others to get Congress to pass the American Disability Act of 1990.

The Post-Polio Survivors also fought to have FDR’s monument include a reference to his polio. At first the National Park Service said FDR tried to hide and minimize his disability during his lifetime so they were honoring his wishes by hiding his wheelchair under a cloak on his statue.

“It was a shame, disgrace and embarrassment to have his wheelchair hidden in this memorial when in fact he used it every day of his life,”

Alan Reich, president of the National Organization on Disability, which spearheaded the initiative.

Disability advocates prevailed. The Park Service added a statue of FDR in the wheelchair he designed for himself to his monument in 1998.

It is impossible to overstate how important it was for polio survivors to see one of their own in the White House. FDR’s health resort and fundraising focused public attention on polio and the abilities and needs of the handicapped.

The quest for a polio vaccine began in earnest in 1926 and ended in 1963, the year the Sabin live-virus vaccine replaced the Salk dead-virus vaccine. Check back for Polio: The Mid century Menace (Part 2): The March of Dimes and the Salk and Sabin Vaccines

Enjoy reading about the mid century? Join my newsletter.