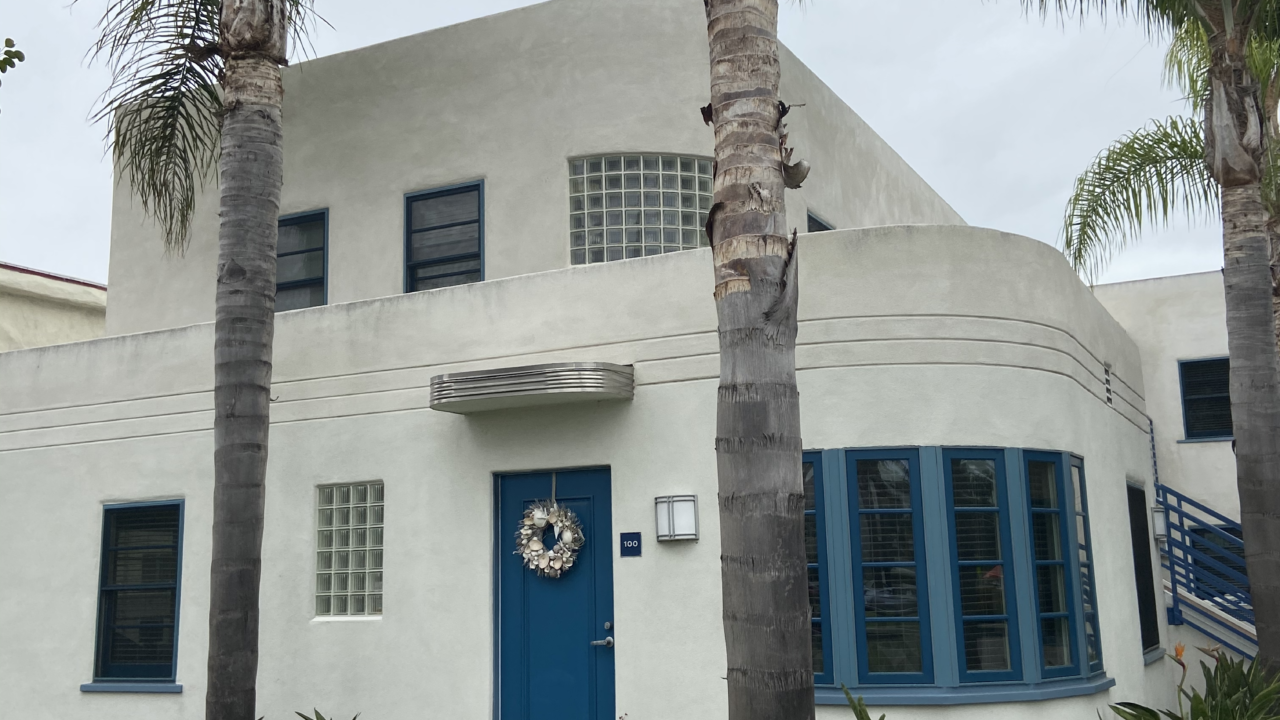 May is historic preservation month. This is the perfect excuse to take a walk and find the historic buildings in your city. Take some time to learn more about them.

For motivation, the Los Angeles Art Deco Society issued a challenge called 31 Days of Deco. They urged you to wander around your town and hunt for Art Deco Architecture. The directions said to take photos, caption them with the address, and post on Instagram with #ShowUsYourArtDeco #ArtDeco and tag @ArtDeco_LA

The challenge is open to all of Southern California, not just LA. Therefore, I went on an Art Deco scavenger hunt around the historic town of Coronado, in San Diego.

What is Art Deco Style Architecture?

“Art Deco buildings have a sleek, linear appearance with stylized, often geometric ornamentation. The primary facade…often features a series of setbacks that create a stepped outline.”

Art Deco had its heyday in the 1920s and 1930s. A rejection of old classical forms, coupled with new construction technologies, produced a style that embraced the future and symbolized progress and advancement. Art Deco was identified as an urban style, and perfect for the 20th century’s new skyscrapers.

I did some research to make sure I knew what features identified a building as Art Deco. Pennsylvania Historical and Museum Commission (PHMC) provided this list:

I started on Orange Avenue, the main thoroughfare, near the Hotel del Coronado. The Hotel Del, by the way, is Queen Anne style. It was built in 1888. I walked towards the Ferry Landing, at the opposite end of Orange Ave.

Redevelopment of Historic Buildings on Orange and 10th Street

These buildings were recently renovated. This block was purchased by Kleege Enterprise for $22 million in 2017. Several long-time tenants had their leases canceled so the buildings could be rehabilitated and the land uses reconfigured.  For many locals, the project was controversial.

Luckily, some of the businesses were able to find new locations. Bay Books, the local bookstore, relocated a block away on Orange Avenue. Costa Azul reopened at the Ferry Landing, with a beautiful view of the Bay. El Cordova Garage moved to Chula Vista.

El Corodova was a popular local garage that opened in Coronado in 1904. It moved into this location, on 10th St. and C Avenue, in the 1940s. This building used to be the Dodge de Soto Car dealership. The results of the  renovation are gorgeous. It has outdoor seating with lights, vintage gas station signs inside, and authentic Italian food.

The Village Theatre on Orange Ave. and 8th St.

The Village Theatre first opened in 1945. Before the Coronado Bridge was built, the City of Coronado was truly a village with its own department store and entertainment. The Village Theater was a popular gathering spot for the locals. However, by the 1980s the theater was in decline and found it difficult to compete with the multiplex theaters on the other side of the Bay.

“By 2000, the theatre had fallen into great disrepair with disinterested owners and the doors were suddenly shut. The owners simply walked away. Slowly, the yellow and blue paint faded out entirely. The once magnificent sidewalk terrazzo became cracked and faded. The Village Theatre became a blighted building on Coronado’s main street.”

With great attention to the Art Deco details, the Village Theater was restored in 2011. Although still closed for COVID, the original sidewalks in front of the theater, the original marque, and the renovated ticket box and doors are excellent examples of Art Deco.

“Curved and rounded surfaces and banding, walls of glass bricks (are) elements of the Streamline Moderne. Although World War II is generally considered as a signal of the end of both Art Deco and Streamline Moderne, such was not the case…In the decade after 1945, a significant number of Art Deco-style structures were built…In these late designs…ornament was eliminated but other Art Deco motifs were very much in evidence.”

Coronado High School preserved one original building, constructed in 1939, by the Federal Administration of Public Works (P.W.A.) The P.W.A. was part of President Franklin D. Roosevelt’s New Deal. Many public libraries and schools were built as part of this government project to employ people during the Depression.

“Work produced under the auspices of the P.W.A. was required to be earthquake-proof. School layout and design were particularly affected by this requirement.”

A notable part of the P.W.A. was that projects had to be interdisciplinary endeavors. This is why so many of the P.W.A. buildings feature murals. This preserved Coronado High building has a raised relief mural called the “Legend of California” by Donal Hord. It is a series of seven limestone panels depicting the artist’s vision of the founding of California.

Seeing the P.W.A. plaque on the high school reminded me of a beautiful Art Deco treasure just over the bridge in downtown. The San Diego County Administration Building is located on Harbor Drive, near the Star of India ship.

Originally called the Civic Center, this building was built from 1935-1938. The architects were all from San Diego: William Templeton Johnson, Richard S. Requa, Louis J. Gill, and Samuel Hamill.

“During the Depression, Art Deco buildings continued to rise…primarily in a style we now call P.W.A. Moderne. These stripped classical buildings employ vertical articulated surfaces accompanied by a sparse usage of Art Deco ornamental motifs such as spirals, zigzags, and triangles.”

The front of the building and the back echo each other. As part of my scavenger hunt, I discovered that the ship on the harbor side was an old time clipper, while the one on the opposite side was a Navy vessel. There are also nods to the military in images of planes and stars. The interior of the building has Art Deco art and murals. Beautiful details like the elevator buttons are all in the Art Deco style.

On the harbor side of the building is the “Guardian of Water” sculpture fountain. This fountain was unveiled in 1939. Local resident, Helen Towle, funded $6,000 for it in her will. The remaining $14,000 was provided by the W.P.A. The sculpture was made by local artist Donal Hord. The same artist who made the mural at Coronado High!

The sculpture of a pioneer woman holding a water jug is symbolic of San Diego’s most precious resource–water. The mosaic incorporates the agricultural foundation of San Diego.

“Mosaic tiles, also designed by Hord, cover the base of the statue. The mosaic symbolizes clouds in the form of kneeling nudes, who pour water from jars over a dam which flows into a…citrus fruit orchard.”

The fountain bowl shows the other important source of San Diego’s economy–fishing. A swordfish chases tuna in a concrete relief while mosaic waves line the edges.

I hope this article inspired you to go on your own scavenger hunt for architectural treasures in your neighborhood. Once you start, you will discover all kinds of historical buildings that you may have overlooked before.

Before leaving San Diego, be sure and visit Shelter Island to see their Tiki Twist on Midcentury Architecture.