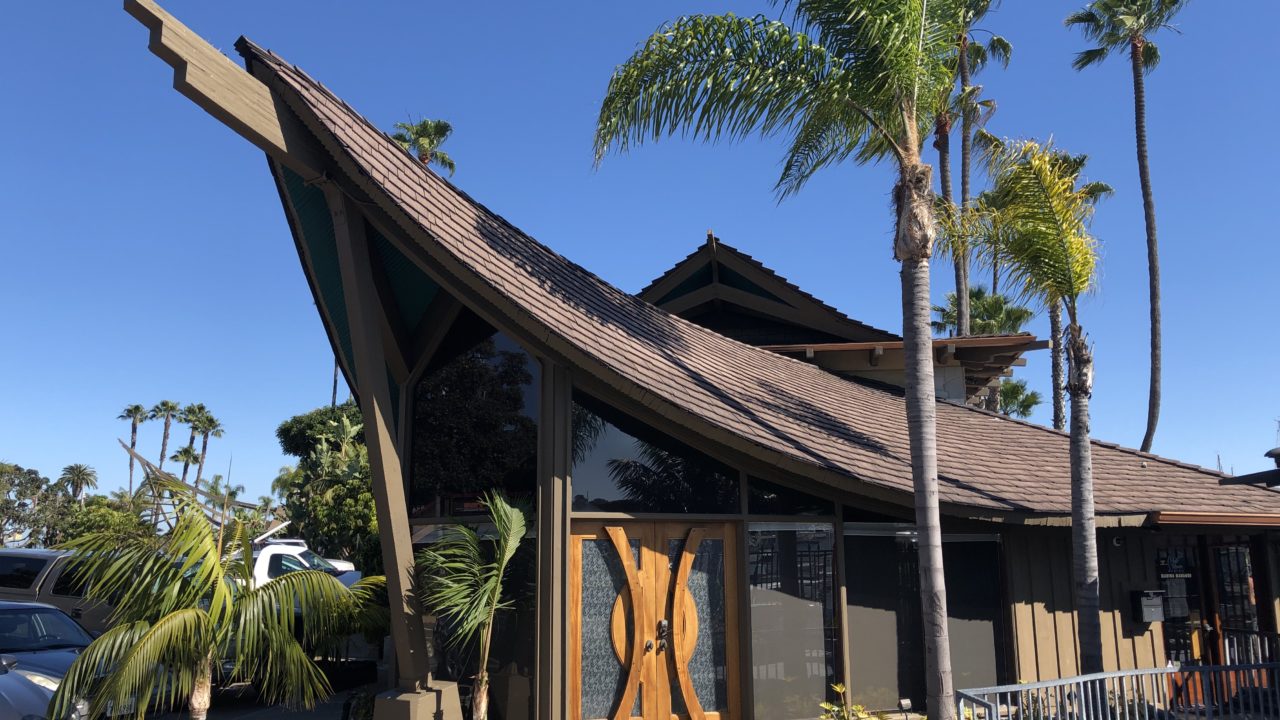 Constructed in the 1950s, Shelter Island regulations required all buildings to have a Polynesian theme. Many of these tiki-inspired gems are still standing and need to be added to your vacation bucket list.

Shelter Island was originally a sandbar formed by the San Diego River. In 1934, the U.S. Navy dredged San Diego Bay to make it deeper for ships and dumped the fill on top of the sandbar. This created a peninsula named Shelter Island. The Port of San Diego owned and controlled all development of Shelter Island in the 1950s. The Port specified, through a zoning tool called a “special overlay zone,” that all buildings had to have a Polynesian theme.

San Diego was Marketed as “A Little Bit of Hawaii”

The Polynesian theme was a perfect marketing tool for San Diego’s nautical and maritime culture. Tourism publications of the time advertised San Diego as “a little bit of Hawaii.” Semi-tropical weather provided perfect conditions for landscaping with tropical plants such as palms, banana trees, hibiscus, plumeria, impatients, ferns and orchids.

What is Tiki Culture?

During the 1950s, Tiki Culture was in full sway. It’s creation is attributed to WWII soldiers returning from the Pacific Theater. Also, to the popular musical South Pacific, by Rodgers and Hammerstein, and a book called Kon-Tiki: Across the Pacific in a Raft, by Thor Heyerdahl.

Kon-Tiki: Across the Pacific in a Raft documents Heyerdahl’s efforts to prove that Polynesia was settled by people from South America in pre-Columbian times. He built a raft out of balsa logs and other native materials using indigenous construction methods.

On April 28, 1947, Thor Heyerdahl sailed from Peru towards the island chain of French Polynesia. After 101 days, and a voyage of over 4,300 miles across the Pacific, his raft crashed into a reef on the island of Tuamotus. His book about the voyage, Kon-Tiki: Across the Pacific in a Raft, was published in English in 1950, and became a bestseller. A documentary of the voyage, won an Academy Award for Documentary Feature in 1951.

Midcentury modern architectural features such as A-frame roofs, post-and-beam construction, and floor to ceiling plate-glass windows and doors all form the base to which Polynesian details were added in the Shelter Island buildings.

Midcentury Modern Architecture’s love of geometric forms, angular structures and strong lines that create a clean, minimalist aesthetic can be seen in the functional, yet thematic, storefronts, restaurants, and hotels of Shelter Island.

Businesses not seeking a refined and upscale image could fully embrace the Polynesian theme and used tiki faces carved on to the ends of beams, along with tiki and islander statues. The use of lava rock and other stones for accent walls, already popular with the natural materials in Mid Mod, became another opportunity to add thematic details.

A trip to Shelter Island wouldn’t be complete without a visit to Bali-Hai restaurant at the northern tip of the peninsula. This restaurant was part of a franchise called “Christian’s Hut,” named after the main character in Mutiny on the Bounty, a novel by Charles Nordhoff and James Norman Hall. The book, which takes place in Tahiti, was made into a film in 1935, called The Bounty, and starred Clark Gable. A Tahitian Village was built on the island of Catalina for the film, and the original Christian’s Hut was a bar for the crew.

Bali-Hai has a circular shape with thick wooden columns, evoking circular huts, while the walls of glass are definitely modern. Notice the details like lava fire pits and the “Goof on the Roof.”

The original Christian’s Hut was moved to Newport Beach after the filming was over. Additional restaurants in the franchise were built in Corona del Mar and Shelter Island. The original burned in 1963, and only the San Diego building survives. Renamed Bali-Hai in 1954, the restaurant became famous for its Polynesian Floor Shows and Mai Tais served in a tiki mug.

Mr. Bali Hai Gets a Makeover

The large wooden headhunter tiki at the entrance, called Mr. Bali Hai Man, was showing his age with multiple coats of paint, spackle, wood root and termites. Fortunately, Kevin Kidney and Jody Daily volunteered to refurbish him in 2001. After much scraping and repair, they repainted him brown. The only part missing is a bone through the nose, which was part of the original.

The next time you are in San Diego, make time to visit Tikki Modern architecture on Shelter Island. This community is part of Point Loma, the hub of sport fishing in San Diego, so be sure and catch a terrific seafood dinner after your tour.

Do you know of any of the tiki themed neighborhoods in the U.S.? Please share in the comments below