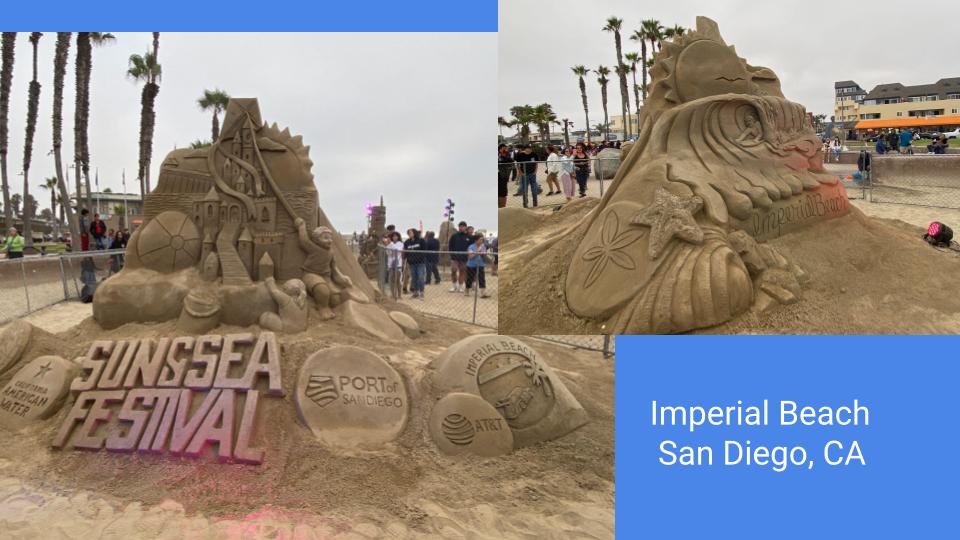 Imperial Beach, also known as “Sandcastle City,” hosted the Sun & Sea Festival near its pier this July. Although much smaller than its historic U.S. Open Sandcastle Competition, this festival featured a competition of four master sand sculpture teams, along with an Exhibition Castle.

Who doesn’t have happy memories of building sandcastles on the beach? It is inspiring to see how elevated this art form can get. The craft goes far beyond dribble trees and bucket castles with a tunnel dug through the center. These sculptors use spades, straws and wooden forms to create aspirational castles on the shore.

At The Sun & Sea Festival, four professional sandcastle building teams competed with each other on individual sculptures. The teams in this year’s Sun & Sea Festival were the IB Posse, Sculpting San Diego, Sandcastle Kit and the Sculpintures.

The four groups worked together, along with the Sand Squirrels, on the Exhibition Castle which included the names of the event’s sponsors.

To earn the designation of a professional sandcastle builder, teams have been paid to build sand sculptures at corporate events and have a track record competing in other sandcastle contests. The Sculpintures won “People’s Choice.”

Sandcastle Kit won First Place for “Day at the Beach”

Imperial Beach earned its moniker, ”Sandcastle City,” because it originated and hosted the U.S. Open Sandcastle Contest for 31 years. First started in 1981, the event grew to become the largest sandcastle competition in the U.S. and attracted 325,000 spectators.

The contest featured several levels of competitions including, masters, amature and children’s. The coveted prize was $5,000 awarded to the first place Master’s Champion.

The Travel Channel named it one of the top 10 sandcastle competitions in the world. The event was free to the public, and its popularity eventually killed it.

The cost to the City to pay for extra police and all the other expenses, along with a lack of volunteers to run it, made the event too challenging to continue. Its final year was in 2011.

“Sandcastle has had a long, successful history and has put Imperial Beach on the map. It’s been a tremendous amount of work for a group of volunteers and I wish to thank them all–recent volunteers and the volunteers over the 31 years–for a job well done.”

The Tin fish restaurant is at the end and offers terrific raw oysters, criss-cross fries and fried meals. Nothing beats drinking a beer in the sun at the end of the pier.

If catching your own fish is more your style, the I.B. Pier is popular with anglers of all ages. You could catch a sheepshead off the pier, although bait fish, such as mackerel, are more common. Although you do not need a fishing permit to fish off of a public pier in California, all other fishing regulations apply.

The first pier in Imperial Beach was built in 1909, and included a boardwalk. But, mother nature eventually destroyed it and the remains were torn down in 1948.

In 1963, the pier was built in its present location. Winter storms in the 1980s pummeled it. In 1989, the Imperial Beach pier was reopened after a $2.8 million restoration, partially paid for by the Port of San Diego.

The I.B. Pier is a great place to watch surfers, who catch the waves below. The ten benches in Portwood Pier Plaza tell the role Imperial Beach played in the history of surfing.

The giant acrylic “Surfhenge” public art provides a great Instagram backdrop. Installed in 1999, and created by Malcolm Jones, the four acrylic arches are between 16-10 feet high. Take a short walk south on Sea Coast Drive, and you will discover “The Spirit of Imperial Beach.” Created by James A. Wasil in 2008, this 20 foot tall statue commemorates I.B. surf, lifeguard and sandcastle history.

Imperial Beach is famous because the Tijuana Sloughs (south of the pier) provided a training ground for big wave riders starting in the 1930s. Many famous surfboard shapers also hailed from this city. Imperial Beach built the first lifeguard station in San Diego in 1943. (historic photos.)

Spend a day at the most southwesterly point in the United States–Imperial Beach. Build a sandcastle, walk the pier and soak in the Southern California surfer vibe of the City.