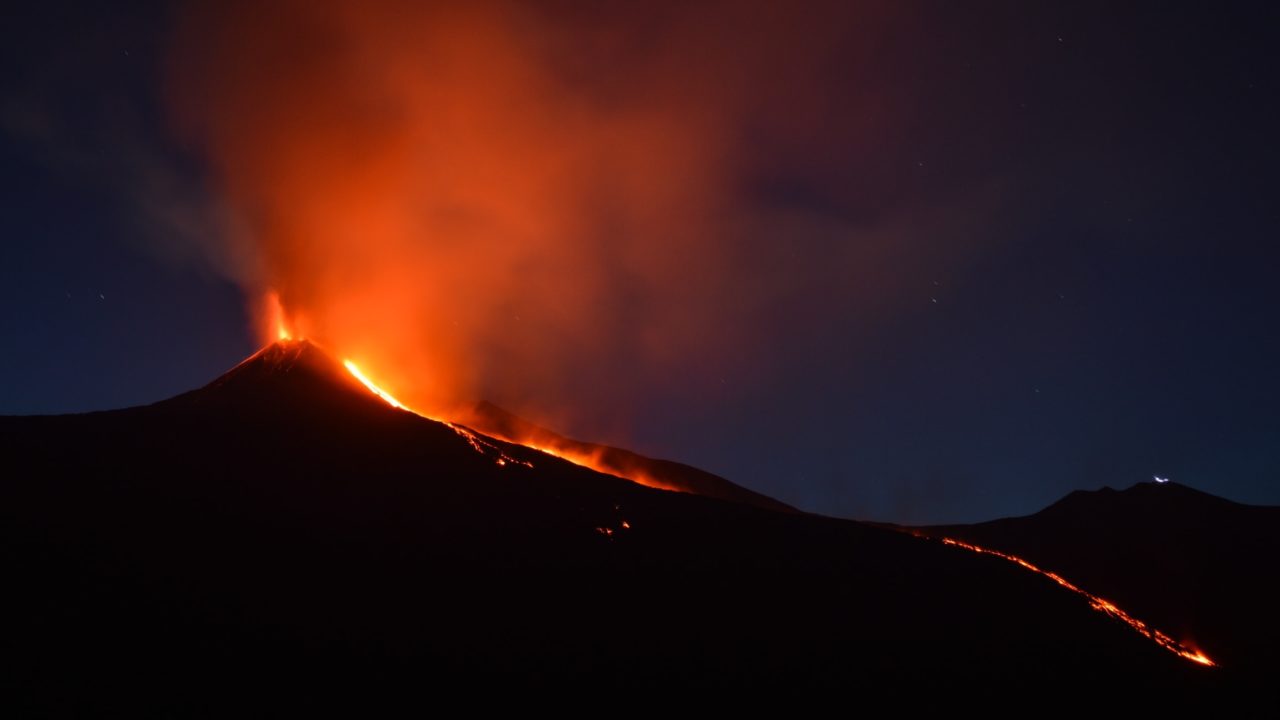 Tiki lovers raise a glass and toast Pele, the volcano goddess of Hawaii.

Her home is on the Big Island in Mauna Loa. Pele has a volcanic personality. She is unpredictable, impulsive, vengeful and given to sudden rages and violence. She is passionate and has many lovers, yet flies into jealous rages.

Yet, she is also the creator of new land and will spare mortals who show her proper respect. Hawaiians call her “Tūtū Pele,” grandmother Pele, an honor given to the Crone, or wise old woman, archetype.

Hawaiian mythology is a story of opposites contrasting each other, and Pele represents both the destroyer and creator. In this way, she is similar to Kali in Indian mythology. Compared to Greek Goddesses, she seems to have Aphrodite’s passion and sexuality, and Hera’s jealousy and anger.

Hawaiians sacrificed baked pork, vegetables, fruit and flowers to Pele. Despite rumors, virgin or other human sacrifices were never thrown into her crater. Traditionally Ohelo berries, from bushes that grow on lava fields and cinder plains, were thrown into her crater to show gratitude before people ate them.  Pele would bury people in lava if they dared to eat the berries without showing her respect.

The creation story of Pele goes back to the Polynesians. In the beginning, there was only Darkness and black nothingness. In the darkness was the Earth Mother, called Papa. Then came the Sky Father Wākea, seen first as light. The light of Wakea penetrated the darkness of Papa, and their union created a universe of opposites.

Only in the marriage of light and darkness can there be life. Plants grow in the sunlight, but germinate in the dark soil. Animals live and grow under the light of the sky, but they were created and nurtured in the darkness of the womb or egg.

The Great Polynesian Gods Were Born

After the world gave birth to form and life, the great gods were born. Kāne, the Creator, was the first born and reigned over the others. Kanaloa, was god of the Ocean, and Kū, became the god and patron to the works of men. The forth male god, Lono, was the god of agriculture.

These male ancestors were the sources of all power. They came to Hawaii through the turbulence of  thunderstorms, whirlwinds and lightning.

The supreme female spirit was born. She was known as Hina or Haumea, and was the goddess of fertility and women’s works.  She gave birth to La’ila’i, the mother of humankind.

Pele was Born in Polynesia and Traveled to Hawaii

Pele was the daughter of Haumea in the ancient homeland. She did not come to Hawaii until long after the great male gods had arrived. Her motives for going to Hawaii are unknown. Some say she was seized with a restless need to travel, and others say she was driven out by a flood.

Most believe that Pele seduced the husband of her eldest sister, Nā-maka-o-Kaha’i, the goddess of sea and water. Furious at the betrayal, she expelled Pele from Bora-Bora. Pele quickly built a canoe, but was pursued across the Pacific by her enraged sister. Luckily, her elder brother, Kā-moho-ali’i, was a great shark and the custodian of the Water of Life, and he guided her canoe north.

Pele First Landed on Ni’ihau and Searched for a Home

Pele first landed on Ni’ihau, the northernmost island of the Hawaiian archipelago. She took Pa’oa, her magic stick, and began making a deep pit for her home where the sacred fire could be protected. Nā-maka-o-Kaha’i discovered her and flooded her pit with ocean water. This is symbolic with the mythology of opposites, water defeates fire.

Pele moved on to the next island, Kauai, and, just as she had finished digging, her sister deluged that pit with water. It continued island by island, Oahu, Molokai, and Lanai. On the island of Maui, Nā-maka-o-Kaha’i caught Pele and tore her body to pieces. A hill named Ka-iwi-o-Pele, (the bones of Pele), stands near Hāna and marks her mortal remains.

Pele Becomes the First Deity Native to the Hawaiian Islands

With the death of her mortal body, Pele’s spirit was freed and she was elevated to godly status. Since this event happened in Hawaii, and not in the ancestor homeland, she became the first deity native to the islands. Her spirit flew to Hawaii, the Big Island, where she found a permanent home in Mauna Loa, the Earth’s biggest mountain. Here, high above the ocean, Pele could keep her sacred fire burning without fear of flooding by Na-maka-o-Kaha’i.

To this day, Pele lives in Mauna Loa, although she moves among the active volcanoes of Kilauea, Hualalai, and Loihi, which is still underwater. She also visits the active volcano,  Haleakalā, on Maui. Folklore says that Pele can be seen as a ball of fire in the sky traveling to the volcano before it erupts.

The goddess has been busy building more land for her beloved Hawaii. Her most recent home has been in Kilauea, which last erupted in  2018. This was part of the Pu’u O’o eruption which began in 1983. Thus far, it has added 544 acres to Hawaii. Before this, the largest Kilauea eruption had been the Mauna Ulu, which lasted from 1969-1974. It added 230 acres to the island.

Hawaiian volcanoes are shield volcanoes and the lava is made of basalt, which is very fluid and doesn’t erupt explosively. Shield volcanoes tend to erupt as fountains and create cinder cones and splatter cones.

Toast Pele with a Tiki-Inspired Drink

Raise a glass of Pele’s Pleasure Punch and toast the Volcano goddess with a flaming drink. I was lucky enough to visit Hawaii as a child in 1974, when my father was stationed on Oahu. We saw Kilauea erupting then, and I was able to see the most recent eruption. I saw both eruptions from a distance and remember the red lava glowing in the night, the thick clouds and the steam as it hit the water. I felt awe walking on new born land, just birthed by Pele.