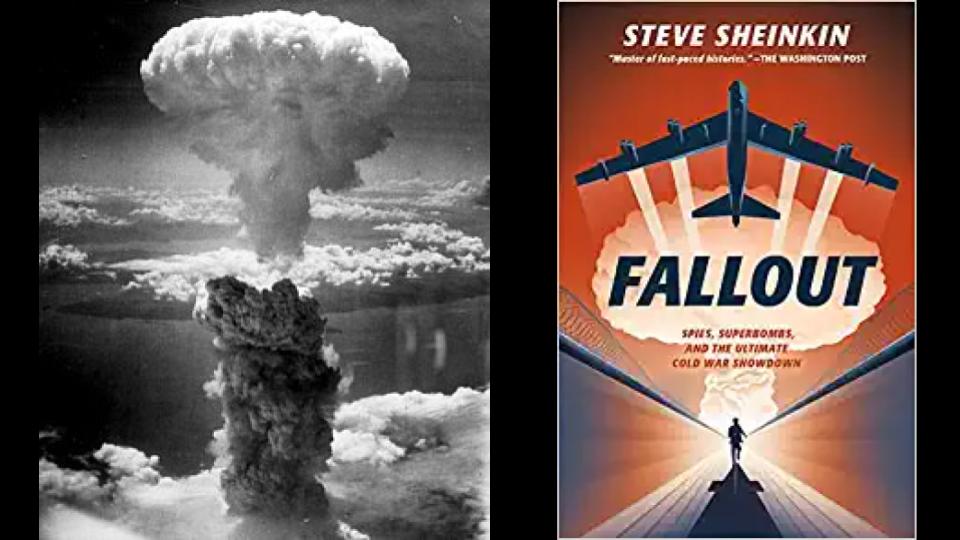 Why spend time learning about the Cold War? The headlines give us reason enough. Russia masses troops and threatens Ukraine. Russian troops put down protests in Kazakhstan.

The threat of nuclear weapons has all but disappeared from the news, but not from world arsenals. American citizens should revisit Cold War history to put current events in a broader context.

But who has time to study history?

Since YA nonfiction books are geared for middle and high school readers, they are well written and engaging. They provide narrative nonfiction storylines that don’t depend upon prior knowledge. Unlike many ponderous adult history books, YA texts are designed to hold the attention of readers.

There are many excellent YA nonfiction books available covering all areas of history. Because of their target audience, most YA books have the strengths that I explore below. I have focused on one book to provide examples and because it is about the Cold War.

I highly recommend Fallout: Spies, Superbombs, and the Ultimate Cold War Showdown, by Steve Sheinkin. On page one we are introduced to a mysterious hollow nickel used by a Soviet spy in New York. The tension of each short chapter keeps the reader turning the pages all the way to the climax of the Cuban Missile Crisis.

YA Nonfiction Books Support the Reader with Images

Young Adult texts are friendly to the reader. For example, Fallout includes maps. This is a feature that I often find missing from adult nonfiction. At times, I have to set down adult books to look up a map or an image to understand the text.

Adult nonfiction books often include far more details and footnotes than the casual reader is interested in. YA books are concise and engaging.

Each of the three sections of Fallout opens with a collage of photographs of key players in the Cold War drama. These include political leaders, spies, astronauts, and rebels from the U.S., Soviet Union, Cuba, United Kingdom, East and West Germany.

Sprinkled throughout the text are additional photographs of historical events like people trying to escape East Germany, nuclear tests, the U-2, and fallout shelters.

Steve Sheinkin, the author of Fallout, is an excellent writer. He takes historical figures, like Nikita Khrushchev, Kennedy and Castro, and puts flesh on them.

“Standing five foot two, with his baggy suits and gap-toothed smile, he [Khrushchev] was used to being underestimated Overlooked. That was fine with him. It was just where he wanted to be.”

“With his thick dark hair, quick smile, and custom suits, John Kennedy was something new–a stylish young president. A cool president. Voters had no idea that behind the slick image was a man who battled several chronic illnesses, who required a mix of shots and pills, plus three hot baths for his back, just to get through each day.”

“Just thirty-four, Castro had overthrown a corrupt tyrant and seized control of Cuba less than two years before…Now, outside a hotel in Harlem, in front of crowds and reporters, Castro and Khrushchev met for the first time. The bearded six-foot-two Cuban embraced the five-foot-two Russian, and Khrushchev would later describe the pleasant sensation of nestling in the arms of a bear.”

As a science teacher, I often turn to YA books to help me scaffold scientific concepts. YA and children’s books understand the power of the analogy and metaphor to make difficult concepts understandable.

In Fallout, nuclear weapons haunt the entire book like a character. The presence of “the Super,” the hydrogen bomb, lurks in the reader’s mind and creates nonstop tension.

Sheinkin is able to take a potentially confusing topic–the difference between fission and fusion bombs–and make it understandable to teens. This type of explanation is what many adult readers need as well. The author makes no assumptions about the reader, he just explains things clearly.

“Scientists realized that if they could break apart an atom’s nucleus, it would release energy as it split, a process they named fission. If they could cause enough atoms to split rapidly enough, they’d have a new kind of bomb, one far more powerful than conventional explosives such as TNT. Led by a physicist named Robert Oppenheimer, the team succeeded, testing the world’s first atomic bomb in the New Mexico desert in July 1945….Three weeks later, the United States dropped two of these bombs on Japan.”

Sheinkin needs more space to explain the hydrogen bomb, but the reader can follow it.

“Let’s start with this fact: the sun is big…More massive objects have more gravity. The sun’s gravity compresses its core into an area of enormous pressure and temperature. In these extreme conditions, atoms of hydrogen, the lightest element, smash together and combine, forming a new element, helium. The process releases vast amounts of energy–it’s the energy from fusion that gives the sun its light and heat.”

“The physics gets complicated, and some of it’s still classified, but the key point is that they [Teller and Ulam] figured out a way to ignite a fusion bomb using the X-rays produced by a fission blast. Both bombs would be housed inside the casing of a single warhead. The fission bomb would spark thermonuclear burning in the fusion bomb, and you would get the combined power of both explosions.”

Instead of just focusing on the nuclear weapon aspect of the Cold War, Fallout includes references to important events such as the Space Race. Sheinkin references pop culture that will resonate with readers today.

“American kids began reading about new comic book heroes called the Incredible Hulk and Spider-Man. Both got their powers from nuclear blasts and radiation–no coincidence, given the state of the world.”

In Fallout, Sheinkin explores the psychology of world leaders. People are complex and he avoids simplifying the storyline into one of villains and heroes. The reader can put themselves inside the heads of the leaders and understand the perspectives of both sides.

“John Kennedy’s greatest fear was that he and Nikita Khrushchev were making the same mistakes as past leaders, bumbling down the same ruinous road. Kennedy couldn’t shake the nightmare image of two people in rags, huddled in radioactive rubble, wondering how they got there.”

“Like Kennedy, Khrushchev was under constant pressure to be tough, to never back down. If the Presidium and military leaders lost confidence in him, they’d yank him from power, even throw him in jail. Like Kennedy, he had to balance fears about his own future with the danger of blowing up the world.”

Sheinkin sews quotes from the leaders into the story seamlessly.

“Kennedy read the letter for himself. It was long and emotional, oddly personal. A few passages jumped out. ‘If indeed war should break out,’ Khrushchev wrote, ‘then it would not be in our power to stop it, for such is the logic of war. I have participated in two wars and know that war ends when it has rolled through cities and villages, everywhere sowing death and destruction.’”

To understand the perspectives of citizens who lived through world events, it is helpful to watch the newscasts of that time period.

Retro Report has several videos about the Cold War and these make a perfect supplement to YA books like Fallout. Retro Report is a non-profit journalism organization that compiles footage of newscasts around themes. Geared towards educators, they include lesson plans.

Read the YA books to get an overview of the topic and the background information you need. Then watch the videos and send yourself back into history. Retro Report then brings the theme back into the present and discusses new developments on the topic and changed perspectives.

The Cold War and the Nuclear Weapons Threat This episode shows clips about duck and cover, fallout shelters and leaders during the Cold War. It also includes experts warning that the threat of nuclear war today is as great or greater than it was back then.

The Cold War: From the Truman Doctrine to the Berlin Airlift This episode explains the isolation of western Berlin and the Berlin Airlift. It discusses the formation of NATO and why it is still important today for protecting democracy.

Atomic Fears and the Arms Race: Nuclear Testing This episode documents the nuclear tests and the soldiers that were exposed to radiation by the government. It brings the plight of soldiers who become ill in the line of duty into modern times and explores the government’s lack of support for veterans with health issues..

The Cold War Space Race This episode connects the Space Race to how NASA marketed the race to the moon to gain public support and funding.

The End of the Cold War: Nuclear Winter This episode explains the concept of nuclear winter resulting from a nuclear war. It goes on to show how the science was doubted. As a result, the public became less worried about the threat of nuclear war.

There is no excuse to not know our history. Citizens and politicians need to study it to see patterns and hopefully avoid repeating mistakes.

Remember this reading hack–read Young Adult (YA) nonfiction. Supplement your reading with videos of news events created by Retro Report.

Do you have any learning hacks? I would love to hear them! Please leave a comment below and sign up for my newsletter.