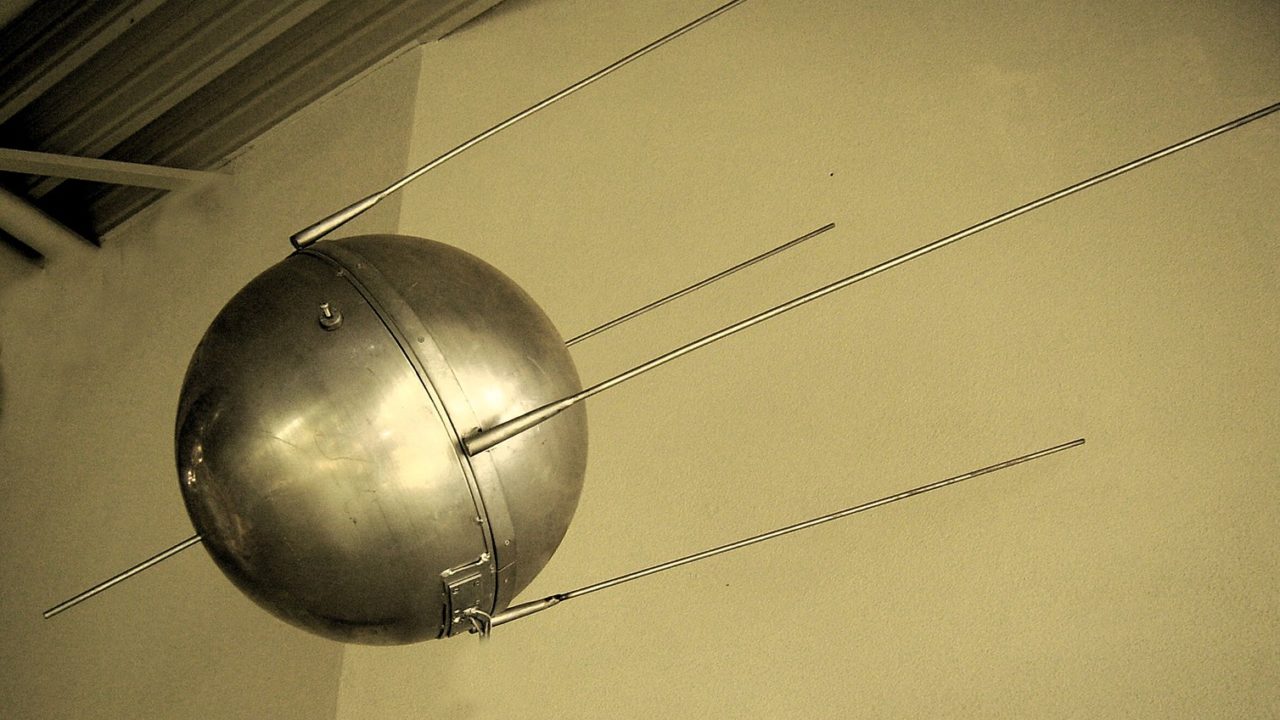 The Space Race between U.S.S.R. and U.S.A. began when the Soviets put Sputnik 1 into orbit. U.S.A. was determined to beat the Soviets to the moon and, along the way, science became cool and important.

My earliest memory was the night we landed on the moon on July 20, 1969. I was almost three years old. On the night of the Apollo 11 landing, my mother, father, fifteen-year-old sister and I were sitting around the black and white T.V. watching the news broadcast in the living room.

The shag carpet, dirty even in my memories, had alternating orange, green, and cream stripes. I liked to twirl the long fibers around my finger as I sat on the rug. My father sat in a rocking chair, closest to the T.V. and smoked his Salem cigarettes. The haze and smell of them hung in the air. My mother sat on the couch drinking her white wine, and my sister sat on the floor with me.

The part of my memory that is most clear about that night is my sister said, “Look, Joycie, there are men walking on the moon!” I ran to the front door, which was always unlocked, and into the front yard. I looked up at the moon, which in my memory was full, and said, “Where? Where? I can’t see the men.” My sister joined me and we stared up at the moon together.

The fullness of the moon was a faulty memory. I looked up the phase and learned that it was in the waxing crescent phase. I don’t know if I actually remember when

Neil A. Armstrong said,“One step for a man, one giant leap for mankind.”

It is funny the way memories are erroneous. I thought I had seen the astronauts step on the moon, but I later learned that the broadcast had been in audio only. Apollo 11 had a silent film camera mounted on the side and this recorded the moment, but the audio and film were not merged until the astronauts returned to earth and the film could be developed.

My dim and faulty memories seem appropriate when you consider the mythology of the Space Race. Although based on science, the Space Race had many sociological and political motives. The effort to land a man on the moon was composed of nationalism, fear and media spectacle.

Kennedy Vowed to Put a Man on the Moon

The original goal of landing on the moon was stated by John F. Kennedy in 1961.

“I believe that this nation should commit itself to achieving the goal, before this decade is out, of landing a man on the moon and returning him safely to earth.”

Kennedy’s dream was realized under the Presidency of Richard Nixon. I didn’t realize until I was an adult how vital the moon landing was, not only for science, but for America’s self-esteem.

The Starting Pistol Shot of the Space Race was Sputnik

The seeds for that dream were sown on October 4, 1957, when the Soviet satellite Sputnik entered orbit.

According to David Halberstam, author of The Fifties, “No one in the Eisenhower administration, despite all the warnings, was prepared. Even worse, and this was almost surely generational, none of the senior men even saw at first what a psychological victory it was for the Soviets.”

However, the press and public saw the connection between the nuclear arms race and the threat of Soviet superiority in space. Eisenhower became aware of how much damage Sputnik had done to America’s feelings at the next press conference.

Hazel Markel of NBC asked, “Mr. President, in light of the great faith which the American people have in your military knowledge and leadership, are you saying that at this time with the Russian satellite whirling around the world, you are not more concerned nor overly concerned about our nation’s security?”

Eisenhower replied, “As far as the satellite is concerned, that does not raise my apprehensions, not one iota.”

However, behind the scenes, the Space Race was on. The public school system came under scrutiny and math and science were prioritized. Life magazine and other publications featured articles about the superiority of Soviet science. Popular culture joined in. A Sputnik cocktail was one part vodka, and three parts sour grapes. Even designers leapt on the bandwagon and developed the Sputnik chandelier.

The Soviet Union gloated with victory over beating the U.S. into orbit.  Space became Soviet General Secretary Nikita Sergeyevich Khrushchev’s propaganda weapon. He glorified the cosmonauts and called them the “celestial brothers” of the Soviet people and he was their “space father.”

The Soviets continued to beat the U.S. Sputnik II, launched on November 3, 1957, and it carried a celebrity, a small dog named Laika. Chosen for her photogenic black and white coloring, Laika became the first living being to orbit the earth. Although she did not survive the trip, she became a martyr that symbolized Soviet heroism. Laika was a simple creature laying down her life for her country and science. Stamps, matchbooks, toys, children’s books and candy featured her image.

Three years later, two dog cosmonauts survived their trip. In August 1960,  Belka and Strelka were launched in Sputnik 5. The dogs were inside a capsule that had a camera and it transmitted live images from space to earth.

Soviet citizens watched the dogs on their televisions.  Strelka, the more outgoing of the pair, spun merrily in zero-gravity, while Belka stayed reserved and watchful.

Among the many toys and items featuring their image was a book that documented how they were trained for their space flight. It was called The Adventures of Belka and Strelka.

After the dogs returned, the Soviets were eager to show that space had no adverse effects on them.

When Strelka had puppies, Khruschev gave one of them, named Puskina, to J.F. Kennedy’s daughter.

The Secret Service carefully scanned and searched the puppy for spy devices before turning the pup over to little Caroline.

The United States finally had a Space Race victory on January 31, 1958, with Explorer 1. We successfully launched our own satellite into orbit.

Other space successes followed for both nations. On January 31, 1961, Ham, a U.S. chimpanzee became the first great ape in space and the first to survive the landing.

The Soviet’s scored an impressive victory in the Space Race on April 12, 1961. On the Vostok 1, Yuri Gagarin made a single orbit around the earth and became the first man in space.

Twelve years after the launch of Sputnik, America won the Space Race by landing the first men on the moon. At the news conference, NASA officials were asked what the true historic significance of the moon landing was.

“The moon shot was one more major step in human evolution. It was comparable to the moment when life emerged from the sea and established itself on land.”

What are your memories of the Space Race? Please share in the comments below.

Be the first to get updates and more!
Scroll Back to Top
When the USSR launched Sputnik, the U.S. became concerned about the link between Soviet superiority in space and military weapons. Details of the Race, from Laika, the Soviet dog, through U.S. landing on the moon.