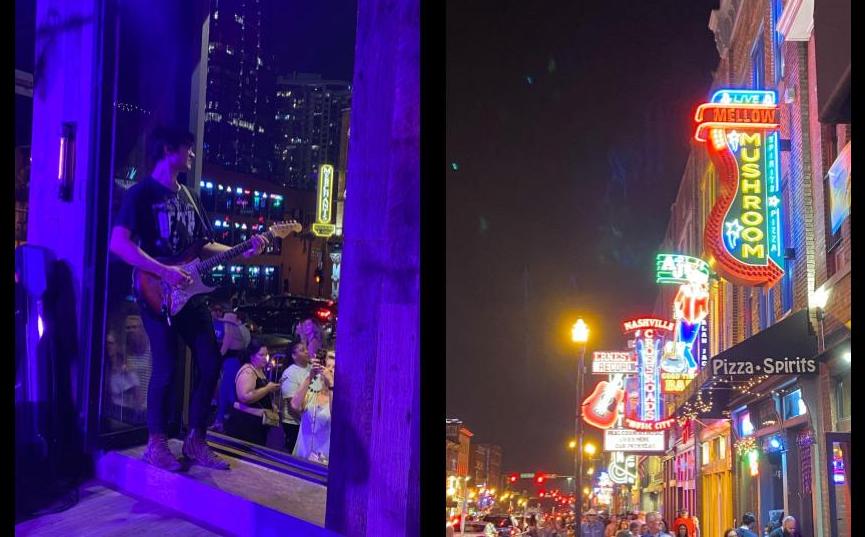 Not Just for Country Fans–Music City is for Everyone

Nashville bills itself as Music City and it lives up to its name. I went in the summer and fell in love with Nashville–the architecture, the history and the music. There are many music-themed things to do in Nashville, Tennessee. If you love live music, Nashville out plays New Orleans, Las Vegas and Los Angeles.

Downtown Broadway Street is the Heart of Music City

Broadway Street has live music from 10 a.m. until 3 a.m. The street is lined with bars and honky tonks. The bands play in the front windows and, as you walk down the street, you can hear and watch them. The bars don’t have cover charges and it feels like you are window shopping for live music. (That guitar player is Gabe Burdulis from Holy Lightning.)

Although many bars had country bands, there were also cover bands doing hits from the 80s and 90s. Most of the bars had great dance floors filled with women. Nashville is a popular place for family reunions, bachelorette and birthday parties. All ages dance and have fun. The decor in each bar reflects music history and many of the venues are in historic buildings.

I went out several nights and enjoyed Thursday the best because I could easily enter the bars without waiting in line. On Friday and Saturday, most of the venues had lines and were insanely crowded. Nashville closes the street on the weekends and there is a heavy police presence so the area felt safe despite the crowds.

If you are a neon lover like me, then Nashville’s neon will thrill you. Broadway is like Las Vegas in the old days and glows with clever neon signage. Read my Try It!  Bending Neon to learn all about this amazing art form.

Located just off of Broadway is the Johnny Cash Museum. Records, videos, letters, costumes and musical memorabilia document his long and amazing career. The museum is well organized and there is a nice flow between the exhibits. A shop in the back lets you take your photo with the Man in Black!

I love Rockabilly music so my favorite part was the Sun Records corner which had incredible old footage and photos of each member of the Million Dollar Quartet (Carl Perkins, Jerry Lee Lewis, Johnny Cash and Elvis Presley.) Read Rockabilly Music: Yesterday and Today to learn more about this great music genre.

The Country Music Hall of Fame is a giant museum dedicated to country music. Stage costumes, guitars, album covers, platinum albums and photos fill two floors. There were interactive exhibits where you could design album covers, get on a tour bus and learn the physics of guitar strings.

I enjoyed the mixing board that let you turn down and up the different instruments on popular songs. It gave me a better understanding of how music is recorded and created. I also loved the section on songwriting which included original handwritten lyrics from many artists.

How Music City Concert Posters Were Made: Hatch Print Shop

In the lower level of the Country Music Hall of Fame is the Hatch Show Print Shop. Originally located on Printers Row, the print shop used to make all the concert and event posters for the area.

“In letterpress printing, raised, inked surfaces–usually made of wood, metal, or linoleum–are pressed onto paper. The practice is essentially the same method of relief printing as that invented in the fifteenth century by Johannes Gutenberg, using movable, hand-set type, hand-carved blocks, and hand-cranked printing presses.”

For posters with more than one color, separate forms had to be created and the poster passed through the press multiple times for each color.

In the back of the gift store, you can watch the printers creating posters using the old fashioned printing press and type set. There are also modern posters for sale created using the old methods, as well as replications of original concert posters. The Hatch Show Print Shop is a real treat for history and concert memorabilia lovers.

Where Elvis Recorded his Hits: The Studio B Tour

You arrange the RCA Studio B Tour through the Country Music Hall of Fame. They drive you to it on a bus. This tour is a must for Elvis lovers. You can see the studio he recorded in, touch his piano and learn fun details about his recording sessions. The tour guide was passionate about Nashville music history and the need to preserve Music Row.

This studio was known as “The House That Chet Built.” That’s Chet Atkins—another one of the founders of Music Row—and it was built in 1957. Following the Mike Curb Family Foundation’s 2002 purchase of RCA Studio B, the space was leased to the Country Music Hall of Fame® and Museum and opened to visitors. The studio’s exterior was renovated, and the interior was returned to its 1960s-era prime—known as the “temple of sound.”

Music Row is the heart of Nashville’s music business.I took the Historic Music Row self-guided tour and learned the recording history of Music City and the development of the Nashville Sound.  Nashvillesites.org has a website with different thematic walking tours.

“Fire Hall No. 7 was built 100 years ago… In 1994, Sony and Tree Publishing renovated the Fire Hall and reopened it as a songwriter’s studio.The list of songwriters who wrote for Tree Publishing: Roger Miller, Willie Nelson, Hank Cochran, Bill Anderson, Bobby Braddock, and Brooks and Dunn. This is even the company that publishes the Beatles songs as well as that first big hit of Elvis, “Heartbreak Hotel.”

In 2014, Studio A was purchased by a developer who planned to tear it down for condos and restaurants. The Music Row community, led by musician Ben Folds, sounded the alarm. Aubrey Preston, Chuck Elcan and Mike Curb agreed to buy the building and preserve it–two hours before the final deadline.

“This is where young singers and songwriters, such as Amy Grant and Michael W. Smith, met and performed in the early days of the contemporary Christian music scene during the 1970s. Business at Koinonia boomed in the 1970s and 1980s, in part, because of their next-door neighbor—the Belmont Church.”

How Nashville Became Music City at the Tennessee State Museum

The How Nashville became Music City exhibit includes records, costumes, and photos of key artists and the studios. It even included the original neon sign from Ernest Tubb Record Shop. Ernest Tubb was a country music performer who opened the first record store in Nashville and hosted a weekly music radio show. B.B. King started out as Bill Black’s Combo and became the King of the Blues.

I spent two days in the Tennessee State Museum. It is free and it covers all aspects of Tennessee History. I love museums and this is one of the best historic ones I have visited in the U.S. At the museum, I spent a day learning about the role Nashville played in winning women the vote (Retro Road Trip Nashville: Suffragette City.)

I didn’t discover nashvillesites.org walking tours until my last few days, but I wish I could have taken all of their historical tours. I did manage to catch an architectural tour which I wrote about in Retro Road Trip: Nashville Art Deco Delights.

Nashville is Music City and so much more! There were many additional music sites that I didn’t get a chance to visit including the National Museum of African American Music, the Grand Ole Oprey and more. Be sure and plan a long visit so you can take advantage of all the amazing sites Music City has to offer.

Wait! Did you know pin up Bettie Page grew up in Nashville?

Learn how Aphrodite, the goddess of love and sex, helped her become the Queen of the Midcentury Pinups in my historical fiction fantasy book. Bettie Page: Aphrodite Rising.