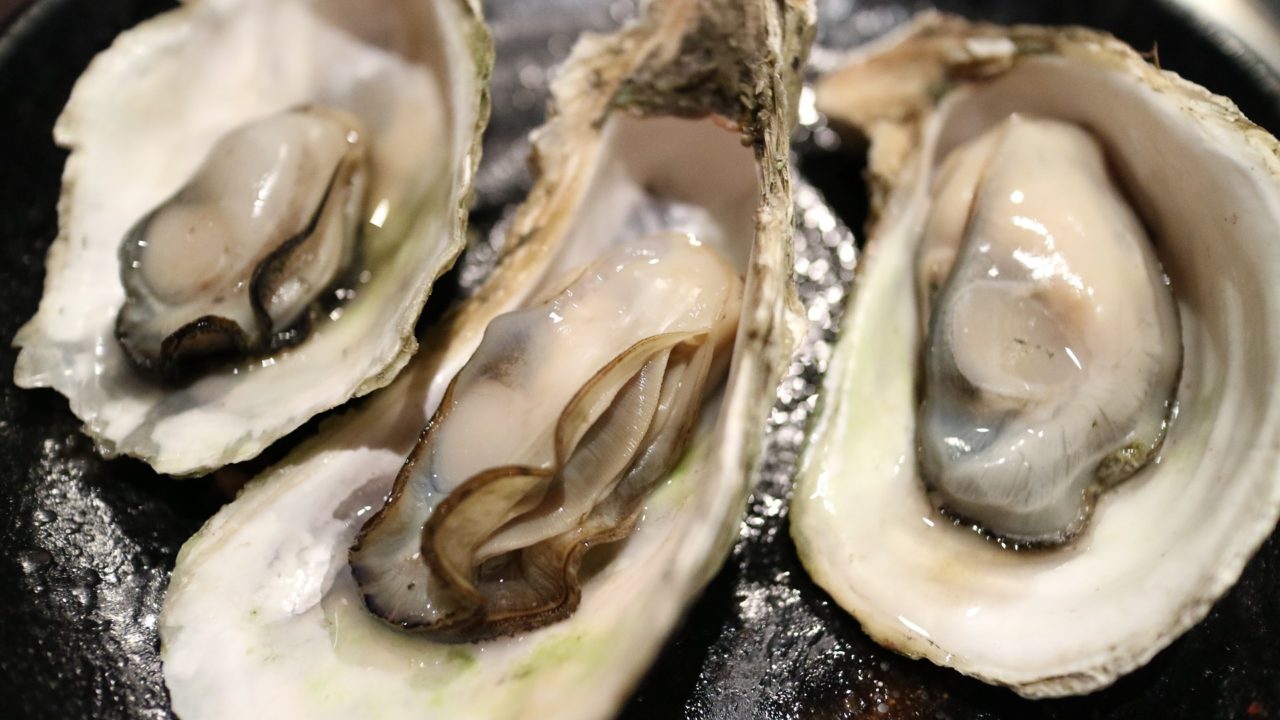 Oysters have been popular from early history through the present. Food oysters are different species than the types that make pearls. One of oysters’ most famous characteristics is that they are aphrodisiacs. How did oysters earn that reputation and how much truth is there to it?

“Aphrodisiac” comes from Aphrodite, the Greek Goddess of Love and Sex

The Greeks believed that the semen was white because it was made of foam. Semen was similar to the salty foam of the ocean. Aphrodite translates as “foam borne.” She has a risque creation story.

Cronos, Zeus’ father, overthrew his own dad—Uranus. It was a brutal fight and, in the end, Cronos chopped his father’s penis off with his sickle. Everywhere Uranus’ golden blood landed, new organisms appeared. Blood on the rocks turned into winged demons called Furies, and blood on fertile soil turned into nymphs and satyrs. And the penis? Cronos threw it into the ocean. Sperm came out of it and made foam. The foam mixed with the sea and created Aphrodite.

So we see the connection of the ocean, foam, and Aphrodite. Botticelli’s Birth of Venus painting shows her arriving in Cyprus in a giant shell. Although in the painting it is a scallop shell, and not an oyster shell, the connection between shellfish and Aphrodite is clear.

In Ancient History, the Greek physician Galen (129-216 A.D.) prescribed oysters as a remedy for lack of male desire. The belief was that the soft milky texture of oysters was like semen and thus eating them would generate more semen in a male. In addition, Galen believed the salty juice and soft flesh of the oyster had the power to excite.

Giacomo Casanova (1725-1728) ate 50 oysters a day. He lived in the 1700s, and was an Italian adventurer and author from the Republic of Venice. His autobiography Histoire de ma vie (Story of My Life) detailed his sexual conquests.

Casanova’s writings show he was focused on the woman’s pleasure and his name is synonymous with a generous and skilled lover. Here is an excerpt detailing foreplay with his “oyster game.”

“I put the shell to her mouth, I told her to suck in the liquid and keep the oyster between her lips. She performed the feat to the letter after laughing heartily, and I took the oyster by pressing my lips to hers with the greatest decency. She was delighted by the delicacy with which I took the oyster from her lips…It was by chance that a fine oyster…dropped into her bosom; she made to recover it, but I claimed that it was mine by right, and she had to yield, let me unlace her, and gather it with my lips from the depth to which it had dropped. In the course of this she had to bear with my uncovering her bosom completely; but I retrieved the oyster…chewed and swallowed it…”

It is no surprise that lovers throughout the ages, inspired by the great Cassanova, have incorporated oysters into a romantic evening of seduction.

Part of their sexy reputation might come from the fact that oysters are hermaphrodites. This means that oysters can be both males and females at different points in their life cycle. Spawning occurs in spring and summer. Individual oysters secrete either sperm or eggs into the water.

External fertilization of the eggs with the sperm occurs in the water. The fertilized eggs drift away as free floating larvae. When they settle on an optimal bottom, they affix themselves to it and are called spat. They remain there for the rest of their lives. It typically takes an oyster two-three years to reach adulthood.

Oysters Live in a Liminal Space

Throughout history, humans have been intrigued by liminal places and times. Liminal means between, or on the threshold. Times that are liminal include dawn, dusk, seasonal equinoxes/solstices, rites of passage and the time between life and death. Places include doorways, boundaries and thresholds. An estuary is a liminal place because it is where freshwater from a river enters a saltwater body, like the ocean.

Part of the magical allure of oysters may spring from their liminal life–free floating larvae which are transformed into a shelled organism fixed in one place and forming the foundation for future generations.

Oyster habitat is brackish water, which means a mixture of fresh and salt water like one finds in estuaries. They settle on hard surfaces like reefs, older shells, piers, and rocks. Their shells grow on top of each other and form reefs.

If you feel frisky and energetic after eating an oyster it isn’t just a placebo effect. Oysters contain eight times more zinc and three times more iron than the same size serving of beef. The nutritional value of oysters also provide B-12, Omega-3, Magnesium, Potassium, and Selenium.

Throw Out the “R Rule” with Oysters

You may have heard that it is only safe to eat oysters in months that have the letter “r” in them, which means colder months.Remember, oysters have been around for centuries, and that rule applied before refrigeration. In the modern world, with refrigeration and oyster aquaculture, it is safe to eat them in any season.

Only 5% of the oyster supply is wild and 95% are farmed. The advantages of farmed oysters is that they are sustainable, cleaner and have a more consistent size and shape. There are scientific tests and regulations on oyster aquaculture to help ensure their safety.

However, oysters are seasonal animals. In the spring and summer they spawn. This weakens them and changes their texture. Often there are fewer varieties available in those months.

In the fall, oysters are eating and storing glycogen for winter. This is the season when they are most sweet and plump. In the winter they are dormant and supplies are abundant.

Live Like a Sybarite and Become an Oyster Connoisseur

A sybarite is a person who appreciates the finer things in life. True oyster lovers can become connoisseurs, similar to those who appreciate fine wines.

Pangea Shellfish Company offers The Beginner’s Guide to Oysters class on their website. The first portion of the class is a general introduction to oysters and the second portion teaches oyster appreciation and how to describe the taste. The information below is from their fun and informative class.

In North America, there are five species of oyster available.

Crassostrea virginica is the Eastern Atlantic Oyster. These are known for their briny flavor and teardrop shape.

Crassostrea gigas are the Pacific oysters grown from British Columbia, Washington and all the way down to Baja, California. They are known for their fluted shell and creamy melon, cucumber finish.

Crassostrea sikamea are Kumamoto oysters grown on the west coast in the Pacific Ocean. They are smaller, claw shaped and have a cucumber finish.

Ostrea edulis is also called the Belon and originally from France. It has a fan-like shell and a copper penny flavor. People usually love or hate this variety.

Ostrea lurida is the Olympia oyster from the West Coast. It is closely related to the Belon and has a savory, mineral finish.

The flavor of an oyster is dependent upon more than just its species. The taste also depends upon the grow out location, grow out method (bottom culture vs. off-bottom culture)  and branding. If you are interested in learning about how oysters are farmed, here is a video from Choptank Oyster Company on Chesapeake Bay. This short video from Oregon Oysters shows another type of culture done using lines.

Oysters are filter feeders. They eat microscopic plankton, algae, minerals and detritus in the water.  This means that the geographic location where they grow will influence their flavor.

This is called “merroir,” from the French word for sea. The expression means that the shellfish take on flavors from their environment. For example, oysters closer to freshwater will taste less briny, or salty. Those grown near seaweed may have seaweed notes. Minerals in the water may affect the taste.

It is best to order two of each type of oyster. Taste the first one without sauce, keep it naked so you can savor the merroir. Pangea Shellfish explains how to judge oyster flavor in their online class and how to use the wheel to describe it.

Oysters are a healthy source of zinc and iron, as well as a food with rich history and lore. Here is an idea for a fun evening: visit your local oyster bar; talk with the staff and learn where the oysters were raised; attempt to determine the merroir of different oyster varieties; ask for wine recommendations to pair with the different oyster varieties. Strive to be a connoisseur and bring the oyster wheel and see if you can describe the taste. For more oyster fun, take some home to play the “oyster game” for perfect foreplay.

In closing I’ll share my favorite oyster memory. My husband and I were renting a room on the beach in Sayulita, Mexico (near Puerto Vallarta.) A wealthy employee for Bimbo Bread rented the room below us. He invited us to celebrate his birthday on his patio. We drank expensive tequila, which goes down dangerously smooth. He hired a local boy to sit on the patio and shuck fresh oysters for the four of us. I remember feeling buzzed from the tequila and tingly from the oysters and thinking, “Success is having your own oyster boy.”

Do you love oysters? Share your favorite oyster bar recommendations or stories in the comments below.