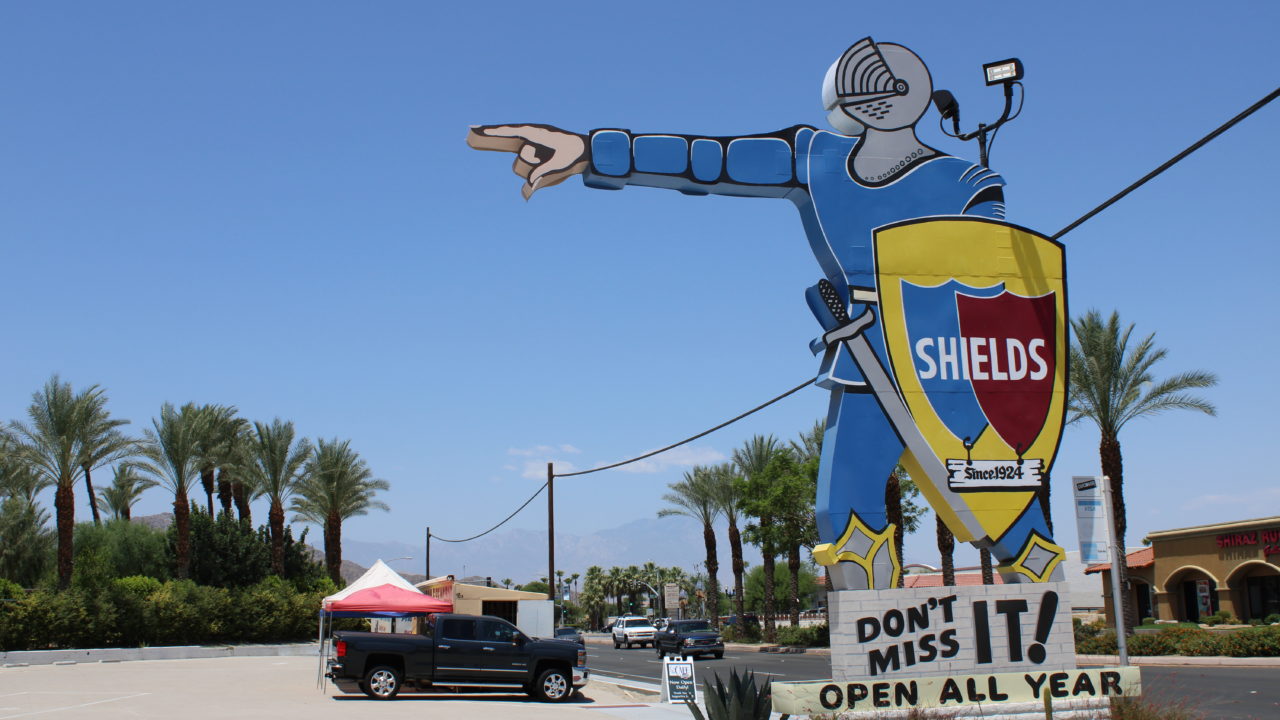 On Highway 111, at the western end of Indio, stands the giant knight with a finger pointing at the Shields Date Gardens. The knight has been a desert fixture since 1953 and marks the location of the Shields date gardens, packing house, cafe and store.

The Date Experimental Station was established in 1904, in Mecca. The U.S. Department of Agriculture conducted studies to test for the viability of commercial date farms in the Coachella Valley. The Station had imported several varieties of date palms from the Middle East and North Africa to test.

Dates are the oldest known cultivated fruit crop and were an important food staple for the Ancient World. Date Palms were cultivated in the Middle East, Northern Africa and the Indus Valley (located in modern-day Pakistan.) The fruit was made into wine, vinegar, bread and cakes. The stones were used to fatten livestock and its wood for utensils.

Date palms require huge amounts of water and were traditionally grown in desert oases. According to Shields, in the Middle East, the farmers said,

“A date palm must have its feet in the water and its head in the fires of heaven.”

The Coachella Valley had the hot, dry air that palms loved and it also had plenty of water for irrigation from groundwater aquifers and the All American Canal, which directed Colorado River water to the desert. Commercial date growing took off.

Growing date trees helped the Coachella Valley capitalized on the latest fad, America’s love of the Middle East. During the 1900s and 30s, visions of Arabian Nights became popular due to films like The Sheik, Cleopatra and  The Queen of Sheba. In 1922, the tomb of Tutankhamun, King Tut, was discovered and it even held dried dates!

The Indio Date Festival was created to celebrate the date industry and the cultural history of their Middle East origin.

Date gardens and stands spread across the valley from Palm Spring to Indio. Competition was fierce. There was a pyramid-shaped date shop, and another Sniff’s Exotic Date Shop, sold dates from a nomadic tent.  The Shield’s knew they had to think of something special to get people to stop at their store.

Shields originally gave this “sex life” speech on date palm propagation in his garden with actual cuttings from the trees. However, the popularity of the program led him to create a slideshow with a recorded soundtrack. He built an 180 seat, air-conditioned theater and showed his slideshow continuously.

Romance and Sex Life of the Date still plays today and can be viewed on their website. In 1952, due to popular demand, Shields also created a book of the film and added Coachella Valley Desert Trails and The Salton Sea Saga to it. This vintage booklet is for sale in the giftshop.

Date palms have male and female trees. The male palm produces pollen, the male sex cell (equivalent to sperm in animals.) Only the female palm can produce dates, the fruit that contains the seed inside of it. Dates are the result of sexual reproduction from the fertilization of the female egg cells, called ovules, by the pollen.

In the wild, pollination of palms occurs through the wind. However, wind pollination requires roughly equal numbers of male and female plants, and the dates are typically small and not as sweet as cultivated versions. Like many plants, date palms can also asexually reproduce through offshoots that grow off the side of the tree and are genetically identical to the parent.

On commercial date farms, the offshoots of the original trees are cut off the parent after 5-10 years. The farm plants only one male and 48 female trees per acre. It takes between 8-15 years for the offshoot to be able to produce harvestable fruit.

Date palms need the help of humans for pollination. Palmeros are considered the “green berets” of agricultural work since it is specialized and dangerous. Palmeros climb ladders, suspend themselves from palm fronds and swing machetes while 60 feet off the ground.

After the fruit appears, palmeros must thin the dates which grow like large bunches of grapes. Allowing fewer dates to grow means that they will be larger and sweeter. The date clusters are wrapped in water-proof paper because if they get wet from rain then they will be ruined. The clusters are then tied to the fronds to help support the weight of the dates as they ripen and prevent them from breaking off.

Dates do not ripen all at once, so the palermo must climb the ladder each day during harvesting season and pick the ripe individuals by hand. Once all the dates are harvested, the palermo cuts off the empty fruit stems and old leaves. He then cuts all the thorns off of the new leaves so that the workers will not be injured during the next pollination season.

Strict immigration laws could lead to the end of date farming in the United States. During WWII, Mexican guest workers, called branceros, came into the country to work the farms when American men were fighting overseas . The palmeros passed their knowledge and skills down through the generations and their trade took three years to master. Most palmeros are getting too old for the work and their children are not interested in farm work.

Another threat to date farms is the amount of water required. Date palms are flooded every 10 days so that the water in the irrigation ditches stands at 10 feet deep. In one year, the Shield’s Date Gardens use 10 acre-feet of water, which is the equivalent of 120 inches/year of rainfall. The Desert’s natural rainfall is 4.7 inches/year so this type of agriculture is only possible with abundant supplies of inexpensive water. As Arizona demands more of its Colorado River water, irrigation will become a major issue in the Valley.

Next time you visit the Coachella Valley, be sure and visit Shield’s Date Gardens. Have a date shake and appreciate how amazing it is to see the same trees that grew in Ancient Mesopotamia and played an important economic and spiritual role in the Ancient World.

Read about the Mythology of the California Native Palm. This is the iconic “petticoat palm” that lines Palm Canyon Drive in Palm Springs. The Cahuilla Indians have a legend about its creation occurring in Indian Wells.