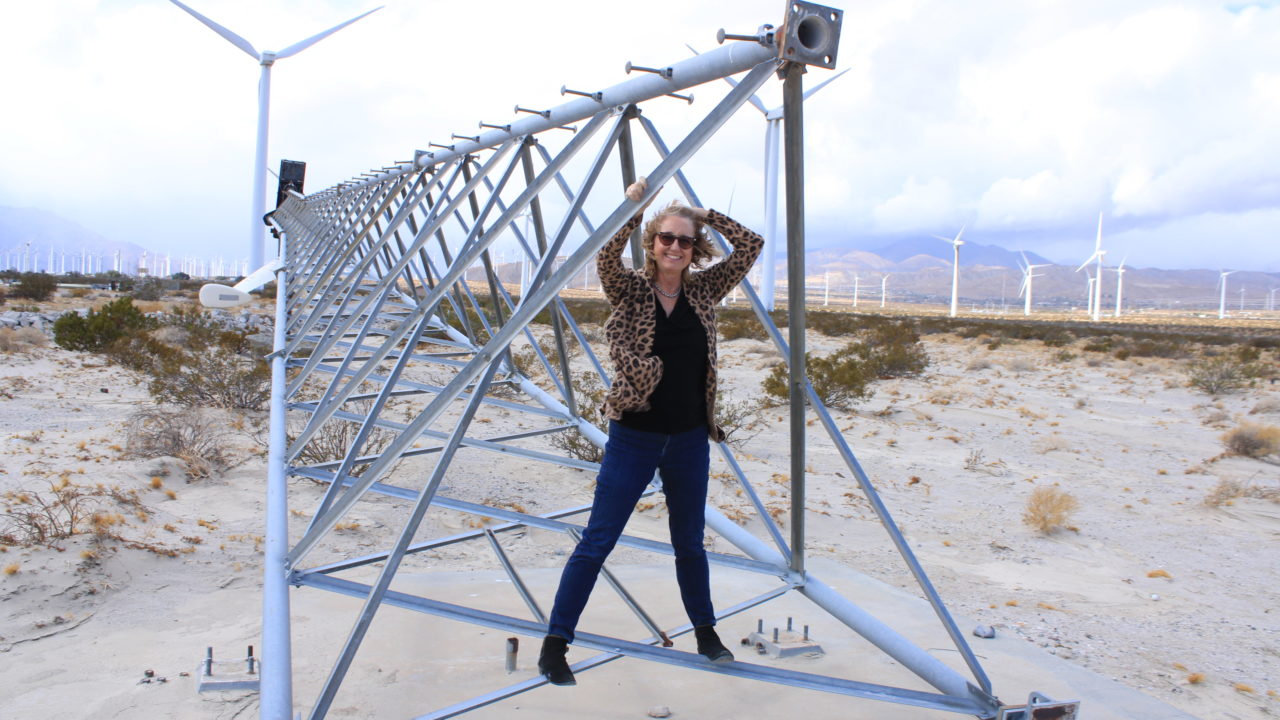 I booked a self-guided Palm Springs Windmill Tour, hoping to learn more about this form of alternative energy and take some Instagram-worthy images of my own. On the day I went, clouds loomed on the horizon.  I hoped that they might add to my images. The closer we got to the Palm Springs Windmill Tour headquarters, the colder and windier it got. Needless to say, the cold and wind put a damper on my photo shoot. Instead, I decided to focus on the narrative of the self-guided tour as I huddled inside my car.

The San Gorgonio Pass is one of the Windiest Places in the U.S.

The San Gorgonio pass is located between Mount San Gorgonio to the north and Mount San Jacinto to the South.The desert’s hot air rises and the cooler air from the coast rushes in to replace it.

When the cool air travels through the San Gorgonio pass, it is compressed because the Pass measures only 4 miles across at its narrowest point. This funnels the wind and makes it blow stronger. Average annual wind speeds are 15-17 miles per hour (mph). This makes the San Gorgonio Pass consistently windy and a perfect site for windmills.

The expression “tilting at windmills” comes from the novel Don Quixote, written by Miguel de Cervantes in 1605. Don Quixote, his imagination fueled by constant reading, believes that he is a knight. He sets off into the Spanish countryside with a peasant, Sancho Panza, whom he believes to be his squire.

In perhaps the most famous scene from the novel, Don Quixote sees three windmills as fearful giants that he must combat, which is where the phrase “tilting at windmills” comes from.

“Tilting” is a term for a type of jousting with a lance. The expression “tilting at windmills” means attacking imaginary enemies or to engage in a futile activity. Palm Springs originally tried to fight the installation of the windmills. Local politicians called them eyesores.

(In the late 1980s) Palm Springs city council member Bill Foster wrote in a Desert Sun opinion piece that the wind turbines had been “as damaging to Palm Springs visually as strip mining has been to towns and villages in Kentucky and West Virginia.”

Efforts to block the windmills were a futile activity. Eventually 4,000 windmills were installed, although now there are around 2,000.  The windmills have become a source of clean alternative energy and pride for the Valley.

“I am proud of the significant role Palm Springs has played in pioneering wind energy,” Pougnet (Palm Springs Mayor in 2014) said, as part of a statement released by the advocacy group Environment California. “I look forward to how advances in wind energy technology will allow energy producers to expand the important role they play in our clean energy supply.”

They are Actually Called Wind Turbines

Windmills are a category word used for any machine driven by the power of the wind. This can include milling grain and pumping water. Wind Turbines are the term used for windmills that generate electricity.

Modern wind turbines harness the power of the wind and turn it into electricity using an electromagnetic generator. Inside the turbine there is a generator. As the wind turns the blades, the blades carry a magnet around a coil of copper wires. The positive end of the magnet pulls the negatively charged electrons through the wire. This movement and flow of electrons is electricity. The electricity is carried through transmission lines, through transformers, and ultimately to residential and commercial end users.

I was surprised to discover that several of my middle school students thought a person was inside the white box behind each windmill fan. That is where the generator is located.

Although solar energy costs are slightly higher than wind energy, both can be placed in the same area to create a hybrid. Solar energy is strongest in the middle of the day when the sun is brightest. Wind power is stronger at night in many areas. By combining the two, energy is produced around the clock. Additionally, this is a great way to maximize land use.

One of the most interesting parts of the tour for me was the graveyard of old wind technology. Wind turbine installation began in the 1980s and there have been many improvements. It is a perfect example of how science is always seeking new discoveries and changing.

Future of Wind Technology is Bright

Solar installer and wind technician are the first and second-fastest-growing professions in the country, respectively, according to the U.S. Bureau of Labor Statistics.

The Palm Springs Windmills are much more than a photo opportunity. They are an exciting source of alternative energy and advancing technology. Be sure and book your own tour and learn even more about this fascinating topic. Oh, and get some great Instagram posts too!

Curious about other Southern California sites or roadside attractions? I’d love some suggestions left in the comments below!