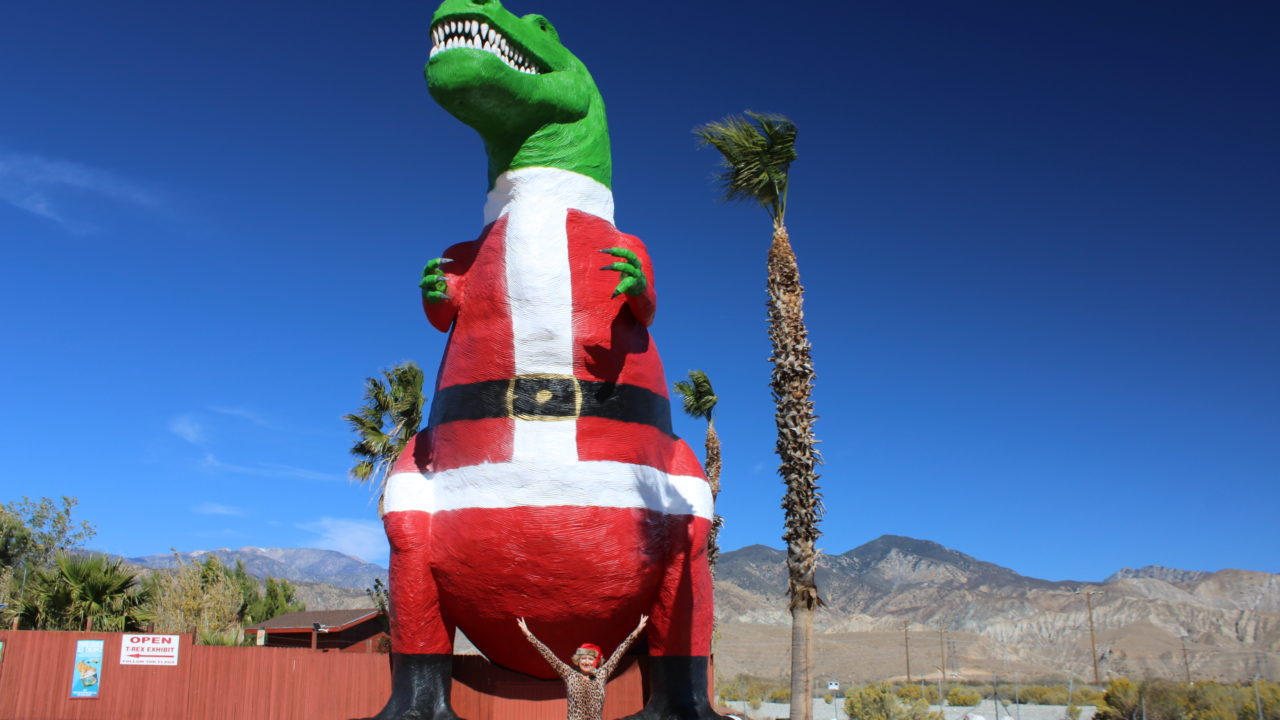 Located just 13 miles west of Palm Springs, the Cabazon Dinosaurs are a “must see” on your next road trip. Off the Interstate-10, are two giant dinosaurs. Mr. Rex has been freshly painted as Santa Claus for the first time ever! Dinny the dinosaur, who used to be brown, is now green too.

If there is one thing the COVID19 crisis has taught us is that hobbies are important. Without a job, hours filled with internet surfing and T.V. become unbearable. Many of us watched our fathers slide downhill after retiring.

Claude Bell was a sculptor and theme park artist for Knott’s Berry Farm, located in Buena Park, California. Originally hired to build statues in the ghost town, he also built the huge Minute Man that stands outside the park’s Independence Hall. Bell worked in the Knott’s portrait studio until he retired in his 60s.

He decided on a career in art when he was a child. On a trip to Atlantic City, he saw “Lucy” a building shaped like an elephant. It stood 6 stories tall, weighed 90 tons and was constructed of 12,000 square feet of sheet metal. Lucy was a type of Mimetic Architecture, a building designed to imitate giant objects or creatures. This childhood visit clearly influenced his dinosaur creations.

The Wheel Inn off of Interstate-10

Bell owned 62 acres next to Interstate-10. The freeway was constructed in 1957, as part of the The National Interstate and Defense Highways Act of 1956. It called for the creation of a 41,000 mile interstate highway system. The federal government paid 90 percent of construction costs, primarily from gasoline taxes.

Claude Bell  built The Wheel Inn, a truck stop restaurant in 1958. (The restaurant closed in 2013.) During the midcentury, Novelty Architecture was popular in America as the nation embraced car travel on the new Interstate Freeways. Novelty Architecture features usable buildings or other structures with unusual shapes. Their size and novelty often turns them into landmarks.

A self-described “nut for prehistoric animals,” it isn’t surprising that Bell chose them as subjects for his Novelty Architecture. Bell had big plans for his 62 acres. He began construction on the first dinosaur, a Brontosaurs named Dinny, in 1964. Bell was 67 years old.

“In the next 30 years I’m going to build an entire family of giant dinosaurs here.”

While the Interstate-10 was under construction, a flash flood had buried cast-off steel and cement. Bell was able to use this material to help defray the cost of Dinny.

The giant dinosaur was first erected with a steel framework. Over this, an expanded metal grid was formed in the shape of a dinosaur. All of it was then covered with coats of shotcrete (spray concrete.)

“Dinny was the first dinosaur in history, so far as I know, to be used as a building.”

Brontosaurus means “thunder lizard.” Fellow dinosaur fans might remember the  controversy over the Brontosaurus. In 1979, paleontologists discovered that the giant skeleton in the Carnegie Museum in Pittsburg, Pennsylvania, had the wrong skull.

The roots of this controversy go back to the “Bone Wars” between paleontologists Marsh and Cope in the late 1800s. The first Aptosaurus fossils were discovered by Orthniel Charles Marsh, in 1877. As is often the case, the fossilized skeleton was incomplete. To fill in the missing skull, Marsh mistakenly used a Camarasaurus skull. In 1879, Marsh discovered a complete Apatosaurus skeleton but he  thought it was a new species, which he dubbed Brontosaurus.

When Claude Bell was constructing Dinny the Brontosaurus, he was using images from Orthniel Marsh. This was before the skull controversy was publicized.

The second giant dinosaur Bell constructed was Tyrannosaurus rex named Mr. Rex. He stands 65 feet (20 m) tall and weighs 100 tons. Bell completed construction in 1986. Originally, there was a slide down the tail, but this was filled in with concrete.

“It’s going to be a Tyrannosaurus rex. You know, the one that stands upright and has those terrifying dagger-like teeth.”

In 1988, at the age of 91, Claude Bell passed away from pneumonia. He still dreamed of expanding his Dinosaur Gardens.

“On his drawing board when he died were a giant mastodon and a saber-toothed tiger.”

The story of the Interstate-10 dinosaurs took a twist after Bell died. His family sold the dinosaurs in 1996, to MKA Cabazon Partnership. This organization turned the gift store inside Dinny the Brontosaurus into a Creationist Museum. Creationists believe that dinosaurs existed on the earth at the same time as humans, only 6,000 years ago.

This contrasts with paleontological evidence. Brontosaurus and Apatosaurus lived 161.2 million-145 million years ago. Claude Bell appears to have believed the science as well because he painted frescoes inside Dinny depicting a naturalist and evolutionary viewpoint.

As a science teacher, I recommend spending some time reading books about paleontology and dinosaurs before your visit. Eyewitness books are a great starting point, but there are hundreds of others. The links in this article also provide additional scientific evidence for dinosaurs. The “Bone Wars” are a fascinating example of scientific discovery and competitive scientists.

Study geologic time scales. Point out to your children that humans did not appear until the Quaternary period (up at the top) and look at the animals that existed with humans. There were no dinosaurs on Earth during any time of human existence.

Use your visit as an opportunity to discuss science and what constitutes valid evidence. Contrast this with pseudoscience. Teach your children how to critically think and show your own curiosity as you learn alongside them.

Despite their Creationist beliefs, the MKA Cabazon Partnership needs to be given credit for preserving this historic roadside attraction. The dinosaurs were repainted in 2020 and look well-maintained. They have also added a Dinosaur Garden feature in the back where children can see smaller sculptures and have an archeological dig, for a fee.

Don’t miss the opportunity to see this amazing example of Novelty Architecture. The photos alone will make it work the trip!

Love taking road trips in Southern California? Join my newsletter so you don’t miss a trip!