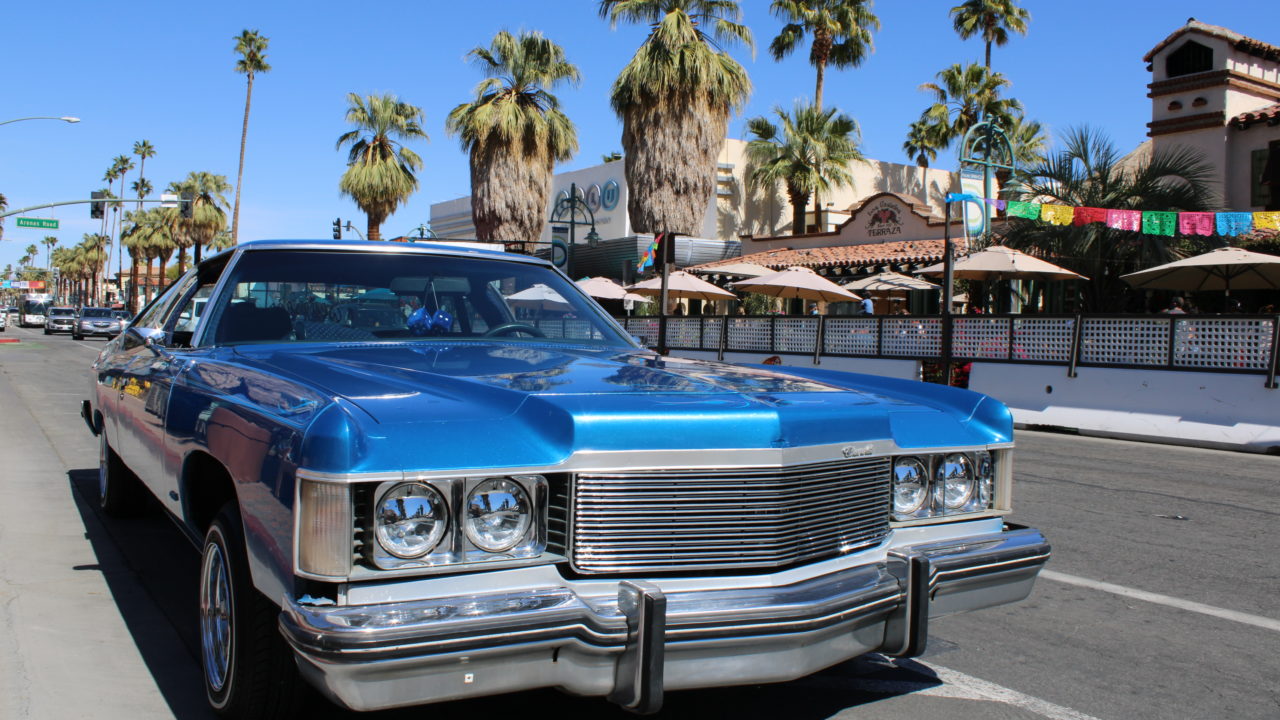 Put on your walking shoes and sunglasses. Time to take a midcentury architecture walking tour of Palm Springs. Park near the intersection of South Palm Canyon Drive and Tahquitz Canyon Way to follow this walking tour.

The Welwood Murray Memorial Library was designed by architect John Porter Clark and built in 1941. Considered one of the originators of “Desert Modernism,” Clark worked with Albert Frey on many Palm Springs buildings, including the Palm Springs City Hall. In 2014, the City completed a 1.3 million dollar renovation on this building.

The land where the library stands was the location of the first hotel constructed in the Coachella Valley. Opened in 1887, and called the Palm Springs Hotel, it was owned by Dr. Welwood Murray. It had accommodations for twenty guests. Author Robert Louis Stevenson and naturalist John Muir stayed in the hotel.

Dr. Welwood built an adobe structure behind his hotel and created a lending library with his personal books. He died in 1914 and the hotel closed. His son gave the land to Palm Springs in 1938, with the caveat that it be used for a library.

Peal McCallum McManus commissioned Lloyd Wright to build the Oasis Hotel in 1924. Her father, John Guthrie McCallum, was one of the first non-Indian settlers in Palm Springs and saw the potential of the area as a tourist destination. The McCallum name is on many buildings in the Coachella Valley.

“Constructed of slip-form concrete in a style unique to Lloyd Wright, the Oasis Hotel is architecturally significant because it was one of the earliest Modern hotels built in Southern California.”

The Oasis Hotel originally had lush landscaping with fruit trees and one of the first swimming pools in Palm Springs. The Oasis Hotel was the first major commercial commission for Lloyd Wright, son of Frank Lloyd Wright. Lloyd Wright went on to have an important career as a modernist architect in Southern California.

In the little alley between the tower and the Oasis commercial building there is a display of the Hollywood celebrities that frequented the hotel. Silver screen stars such as Shirley Temple, Marion Davies, Spencer Tracy, Katharine Hepburn, Humphrey Bogart and Clark Gable all visited the Oasis. Hollywood studios required that stars not travel farther than a two hour drive from the studio when working on a project. Palm Springs was a two hour drive from Hollywood and a provided a popular respite.

“What I wanted in the Plaza was openness and lack of pretense. The lines must be horizontal and inviting. The hurry and scurry of modern metropolitan life is an anachronism in the timelessness of the desert, where mountains a million years old frown upon the futility of haste, and this must somehow be expressed in the contours of our project.”

From 1990-2014, the Plaza Theatre was home to the Fabulous Palm Springs Follies. The Follies included vaudeville acts, show girls, chorus lines and songs from the 1930s through the 50s. It was billed as “a show for old people by old people.” The performers were seniors from 55-84 years old, and included the “World’s Oldest Showgirl.”

When I was in my 20s, I saw the Follies with my parents. I remember the old fashioned show girl outfits with sequins and feathers. The women kicking Rockette-style. The M.C. made jokes about aging and the audience loved it. Buses used to come up to Palm Springs from senior centers and OSHER, adult-education classes, from all over Southern California.

Next to the Plaza Theatre is Brandini Toffee and the perfect place to buy a gift or take a sweet break. This store is a local favorite because it was started by a brother and sister from La Quinta High School. The siblings wanted to raise money for a school trip to Italy. They sold toffee using a family recipe. The business continued to grow and Brandini Toffee became a source of pride for the Valley.

McCallum Adobe and Other Historic Buildings

The Agua Caliente Band of the Cahuilla Indians built a small bathhouse in Palm Springs in the late 1800s for locals and visitors to use their hot springs. Visitors saw the potential for a health resort for tuberculosis patients using the hot springs and the dry, warm air. In 1910, Dr. Harry Coffman and his wife Nellie established the Desert Inn Hotel and Sanatorium. Harry left the Valley in 1914, but Nellie stayed on and removed the word Sanatorium to establish the Desert Inn.

Palm Canyon Drive in Palm Springs is lined with native fan palms. They are trimmed so that their palm skirt has a straight hem. Palms are thirsty trees so, in the wild, they can only live in oases. These are areas where groundwater rises to the surface of the desert as a spring.

The Cahuilla Indians have a rich mythology about these fan palm trees and believe that the first one was created here in the desert, in Indian Wells. Explore both the mythology and natural history of these important local trees in Mythology of the California Fan Palm.

The BevMo! building had a grand past as a Robinson’s Department store. Designed by William L. Pereira, it was built in 1958. A Modernist Pavilion style building, it has diamond shapes on the flat roofline and on the shadow block walls. It originally had posts of anodized gold and and glamorous window displays.

The Palm Springs Art Museum Architecture and Design Center is located in a building designed by our local hero E. Stewart Williams. Constructed in 1961 as Santa Fe Federal Savings, the renovation added beautiful desert landscaping. Inside are rotating exhibits and a terrific gift store for architecture fans.

“Through his work, Williams helped define desert modernism, which is an adaptation of modern architectural concepts to the climatic extremes of the Coachella Valley.”

Built in 1960, this Chase bank was originally Coachella Valley Savings and Loan. It has giant reverse arch supports made of sturdy concrete and a moat with fountains. This building looks beautiful at night with the lights highlighting its unique features. This is another exquisite building designed by E. Stewart Williams.

At the end of your walking tour you will find the Bank of America located on a triangular plot where two streets intersect. It was originally City National Bank and built in 1959. The towering walls of glass and flat roof are Modernist features. The building has yellow and turquoise tiles, breeze block, and both circular and rectangular geometric elements. No two sides of this building are alike.

“Inspired by a visit to Le Corbusier’s chapel of Notre Dame du Haut in Ronchamp, France, architect Rudi Baumfeld of Victor Gruen Associates paid homage to the master with his design…”

Before leaving this end of town, be sure and check out H3K, a fantastic design store filled with furniture and accessories for the Mid Mod aficionado.

It was a long walk, but now you’ve earned a drink and lunch at one of the many wonderful restaurants in Palm Springs. Cheers!