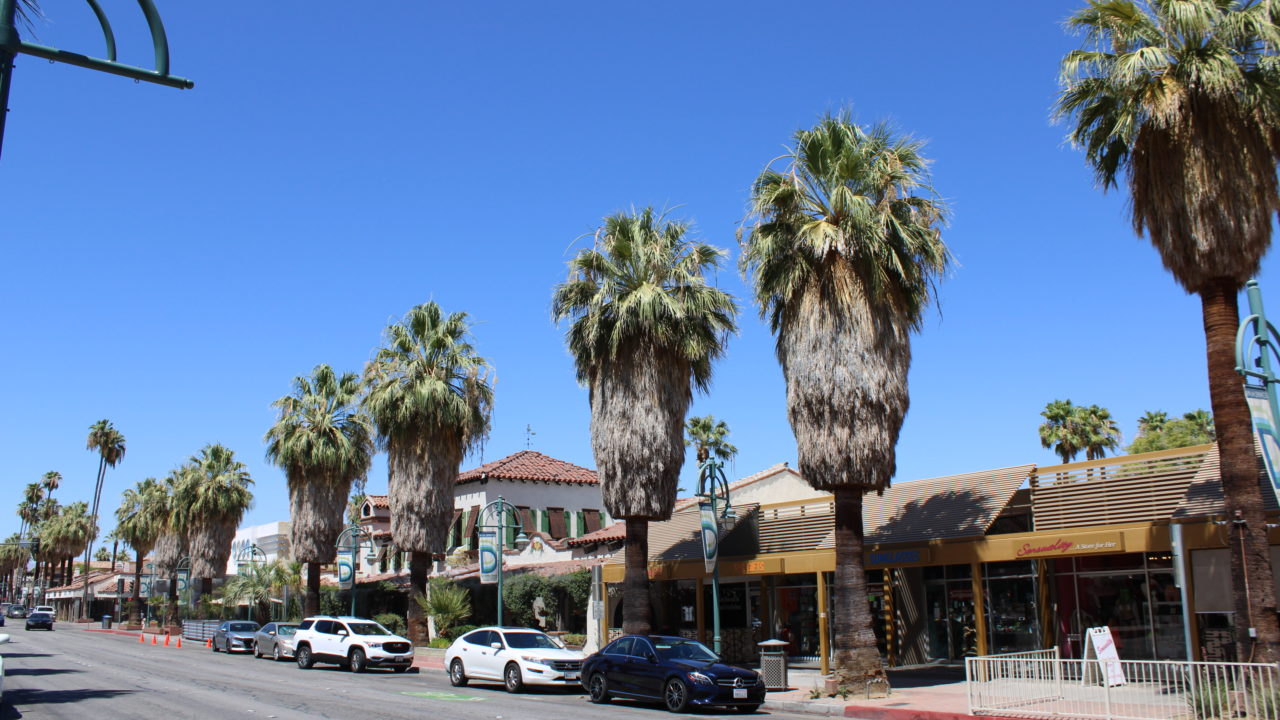 The Fan Palm is California’s Only Native Palm Tree

Palm Canyon in Palm Springs is lined with native fan palms. They are trimmed so that their palm skirt has a straight hem. Palms are thirsty trees so, in the wild, they can only live in oases. These are areas where groundwater rises to the surface of the desert as a spring.

Mythology of the Fan Palm

The Cahuilla Indians (pronounced Ka-wee-yahs) of Southern California told this origin story of the fan palm tree. The Cahuillas lived in Riverside County. This included the deserts south of the San Bernardino and San Jacinto mountains, including the Coachella Valley.

The First Palm Tree on Earth

One of the leaders of the Cahuilla tribe knew that his time on Earth would soon end. He wanted to leave a gift for his people.

He gathered his people in a place called Point Happy, in Indian Wells. At this time, there was a good spring and his tribe lived near it. Many years later, the water began to dry up so the Native Americans had to dig to access it. On one side, they built steps going down to the water. They also dug out a slope for the animals to go down to drink. This is why, when white people moved to the area, they called it Indian Wells.

Remember, during the time of this leader, there were no palm trees anywhere on the earth. So the elder stood up very straight and strong and powerful and said,

“I am going to be a palm tree. My name shall always be Moul (palm tree).”

Soon the bark of the tree began to grow around him and the green leaves grew from the top of his head. While his people watched, he transformed into a fan palm tree.

People settled about the country in many places, but they all came to the Indian Wells to eat the fruit of the palm tree. The animals and birds came to eat the fruit and make their homes in the fronds and trunk of the tree. The people carried the seeds to their homes, and palm trees grew from this seed in many different places.

The Gift of the California Fan Palm

The Cahuilla Indians ate the sweet fruit pulp raw and cooked with it. They also ate hearts of palm, which are the flower buds. Inside the fruit is a single seed. They ground the seeds into flour for cakes. Visitors can still see the mortars, shallow depressions ground into the bedrock that the Cahuillas used.

The leaves, called fronds, of the fan palm have thin fibers coming off the ends. They used these, along with fronds, to make sandals, thatch roofs and weave blankets. The woody stems became cooking utensils.

Most importantly, the fan palm oases created shaded areas to escape the desert sun and heat. The Cahuillas set fire to the palm grove to remove the dead, thorny fronds from the ground and to increase fruit production. Fire burns the skirt of fan palms, but doesn’t harm adult trees. The fire reduces the competing plants and gives palm seeds a better chance at germination. In fact, fire stimulates the fan palm to make more fruit. A single palm can make around 350,000 seeds.

The Fan Palm was also a Gift to the Animals

The fan palms and their oases provide important habitat for native desert animals. The coyote eats the fruit and disperses the seeds through its poop. When hiking in the Coachella Valley, break apart dried coyote poop, called skat. You will often find it composed almost entirely of seeds.

Kangaroo rats, which look more like fluffy mice, eat the fruit of the palm. They are called kangaroo because, when startled, they jump straight up into the air. This lets them escape from predators. Other rodents also eat the seeds. This creates an ecosystem for rodent predators like snakes and owls.

The hooded oriole uses the fibers from the leaves to weave a nest. The female pokes holes in the leaves so that the nest hangs in the shade beneath the fronds. The males are bright yellow with black accents. The female, typical for birds, is a muted yellow so that she is more camouflaged while sitting on the nest. The birds eat the insects that make a home in the hanging skirt of the palms.

The Western yellow bat roosts in the palm skirts and feeds on insects at dusk. These are a relatively rare species of bat because of their need for the fan palm oasis habitat. They are listed as a State of California Species of Special Concern.

Giant palm-boring beetles live only in palm oases. The larvae of the beetle spend five years chewing tunnels into the trunks of desert fan palms. The larvae pupate within the trunk and chew their way out. They leave behind dime-sized exit holes in the trunks. Emerging in June, males and females mate and die within a few weeks. Giant palm-boring beetles kill older trees. Eliminating weaker trees means that the remaining palms are young and healthy. The presence of these beetles is the sign of a healthy oasis.

Observe Nature and Appreciate her Gifts

The next time you are in Southern California, look up and examine the palm trees. Can you tell the differences between them? Think of the origin myth of the Cahuilla. Maybe palms can become a metaphor for our people. There are different types all over the Earth, but we all are all related and similar.

The more I research palm trees the more fascinating they seem. What plants intrigue you? Let us know in the comments below