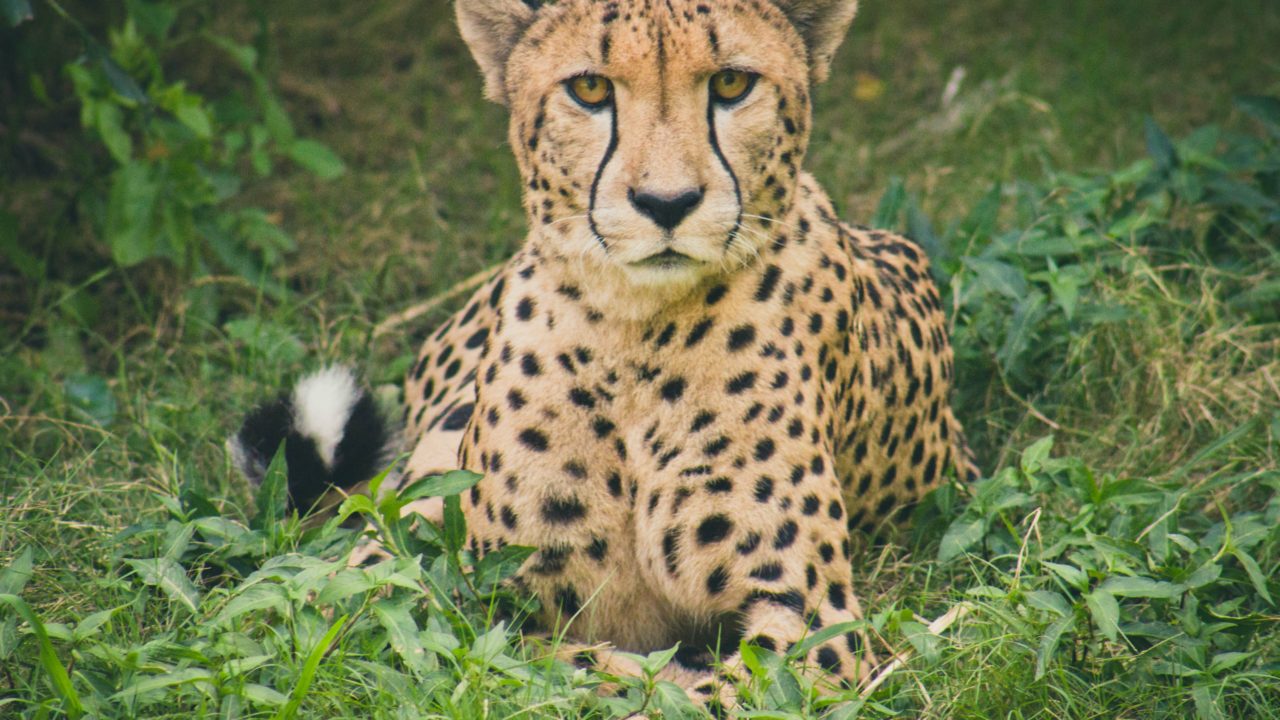 Nearly everyone has seen the iconic image of Bettie Page and the cheetah pinups, now learn the story behind the famous photos.

Photographed by Bunny Yeager at Africa USA, a jungle-style petting zoo in Boca Raton, Florida–the photos are amazing despite the fact that both Bettie and the Cheetahs were not feeling their best.

Intruder Threatens Bettie the Night Before the Shoot

The night before the shoot, Bettie had finished sewing the leopard-print one-piece that she wore in the shoot. It had an off-the-shoulder Tarzan look, a triangle front flap, and five thin ties up the side. She examined the fit of the suit in the mirror and then took it off to practice modeling naked in front of her mirror.

Bettie heard a scratching sound at the window. At first she thought it was the wind, then she recognized the sound of the screen latches unhooking. She grabbed her robe and turned out the light.

“I’ll give you two seconds to get away from this window or I’ll blow your brains out,” shouted Bettie.

Fortunately, the intruder fled. She called a night watchman who came over, replaced the screens and sat on her porch all night. Despite this, Bettie couldn’t sleep. She called Bunny the next morning to cancel the shoot.

“I look like I’ve been on a big drunk,” Bettie warned. “I have big bags under my eyes.”

Bunny insisted that she had already arranged for the location and picked Bettie up at 7:30 the next morning. At the Safari Park, Bettie posed hanging from the trees, near a waterfall, and with animals, including zebras, ostriches, camels and a chimpanzee.

If you look closely at several of the images from the photo shoot, the eyes on both of the cheetahs look glassy. The trainer introduced Bettie to the pair, named Moja and Mbili, (meaning one and two in Swahili.) He told her to be sure and hang onto their chains because they would be hard to catch. He also said that the cheetahs were ill and had been up most of the night.

“The cheetahs didn’t look well either. I felt a little uneasy; I thought they might take it out on me. But I think the worst thing that happened was that they licked me,” recalled Bettie.

Bettie and the cheetahs came through and Bunny Yeager took some of her most fabulous images of Page that day.

Throughout history, cats have been associated with supernatural, spiritual, social, economic and political power. Egypt in particular had many cat goddesses, including Bastet, the cat-goddess; Sekhmet, the lion-headed goddess of fire, war and dance; and Seshat, the goddess of wisdom knowledge and writing who wears a leopard-pelt gown.

Ancient Greek mythology tells of Amazonian women warriors dressed in leopard skins. Xi Wangmu, the Queen Mother of the West in Chinese mythology, was a fierce goddess with the teeth of a tiger and the tail of a leopard.

In the Americas, the Aztecs had an ocelot goddess Tlazolteotl, who purified sinners after sexual misdeeds. The Mayans had the Waterlily jaguar who was the source of fertility.

Black cats appear as the familiars of witches and evoke the crone archetype. Many feminists feel that the historic persecution of witches and black cats reveals a fear of feminie power, according to Jo Weldon.

“People who wear leopard print aren’t afraid to make themselves visible. They wear it to appear seductive, purposeful, luxurious, dangerous, and playful.”

Are you inspired to show your true spots? Do you want to embrace your wild and feline self? The table below will help you correctly identify your big cat prints.

Which ever spot you choose, you can’t go wrong for bold, fierce cat prints. The symbol of a powerful woman with a leopard is an image that goes back to ancient history. So be strong, be fierce, be wild, be spotted!

Love it or hate it, most people have a strong reaction to leopard print. What do is your opinion?

Be the first to get updates and more!
Scroll Back to Top
Bettie Page and cheetahs both felt ill during the famous photoshoot by Bunny Yeager. Leopard print and other spotted clothing represent strong and bold women. How to differentiate the three most popular type of cat print.