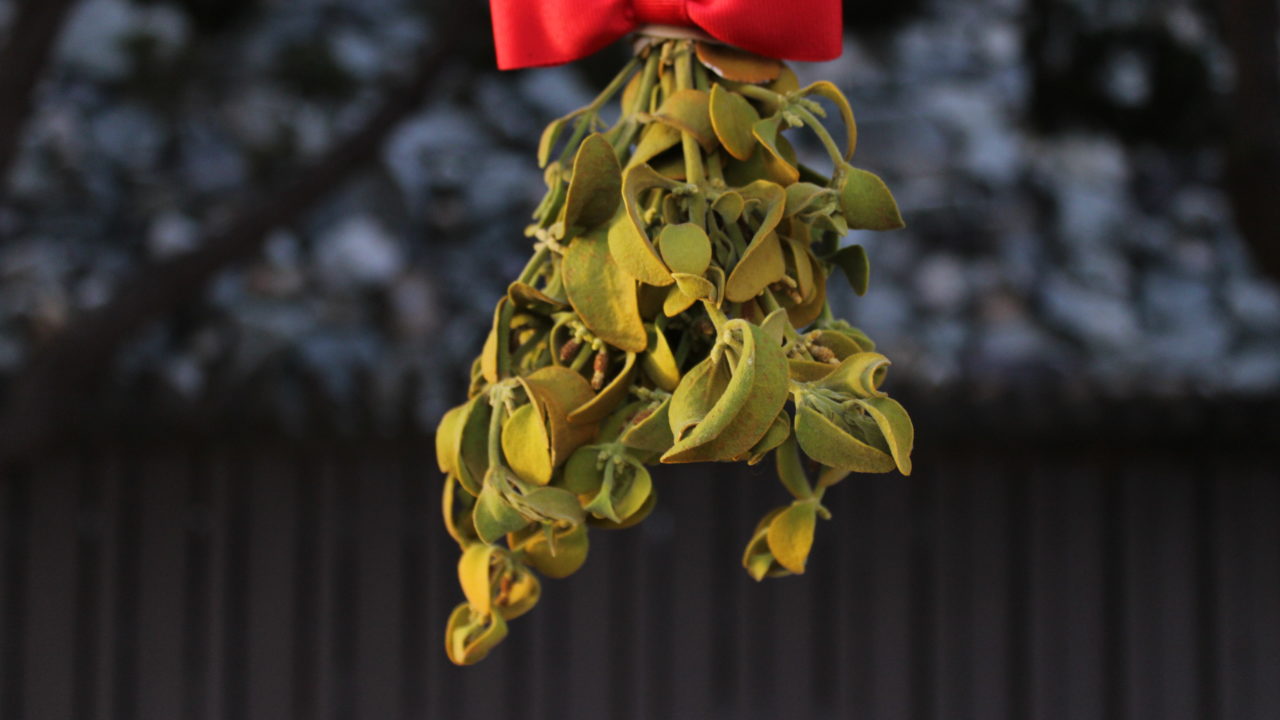 More Than Just a Kissing Plant

In the U.S., we don’t think much about magical mistletoe. We hear about it in songs and want to stand under it with an attractive partner. But, this parasitic plant has a rich mythological history in Europe, as well as a fascinating natural history in science.

Mistletoe is challenging to find in Southern California. From my research, I knew it liked oak trees. So we drove to Garner Valley, which lies on Highway 74, connecting Palm Desert to Idyllwild. We got past the pines and discovered oaks on some backroads. Not every oak tree had mistletoe, but we finally spied some growing high in the branches.

Mistletoe and the Druids

Mistletoe was a sacred plant to the Druids. One reason was because it was evergreen, even in the midst of winter. Second, it only revealed itself when all the leaves had fallen off the tree. Third, it grew high in the branches of other trees and no part of it ever touched the ground. Mistletoe from oak trees was especially sacred.

On the sixth night of a new moon after the winter solstice, the Chief Druid would cut the mistletoe from the oak using a golden sickle . A cloth was held below to prevent any mistletoe from touching the ground. Mistletoe sprigs were distributed to the people. Magical mistletoe was hung over doorways as protection against thunder, lightning and evil.

The Druids believed that the white berries of the mistletoe represented the sperm of the Gods. This made mistletoe a magical aphrodisiac. When brewed into a diluted tea, the mistletoe was believed to ensure fertility, be an antidote to poison, and protect against witchcraft.

Baldur was the most beloved of the Norse gods. Baldur’s mother, Frigg, the goddess of marriage, had a dream that Baldur was taken by Hel. Going to Hel’s kingdom meant that Baldur would die a needless death because if he were to die in battle then he would have been taken by the Valkyries to Valhalla.

Frigg visited Hel and begged him not to take her son. Hel replied that if she could get every living and nonliving thing to promise not to hurt Baldur he would be safe. Frigg traveled around the world, extracting promises from rocks, rivers, plants and animals. However, she forgot to ask mistletoe. She thought that he was too small and harmless to worry about.

Loki, a mean-spirited trickster, had always been jealous of Baldur. He discovered that Frigg hadn’t received a promise from mistletoe. He came up with an evil plan. Loki fastened a piece of mistletoe to an arrow. He knew the gods liked to play a game and attack Balder with weapons because he could not be harmed.

The belief that mistletoe was an aphrodisiac and could promote fertility is one suggestion for the traditional kiss under the plant.

A more platonic tradition stated that if two enemies met under a mistletoe in the forest then they would have to lay down their arms. They would maintain a truce until the next day. Mistletoe became a symbol of peace and goodwill.

Mistletoe is a parasite. This is a type of symbiotic relationship in nature where one benefits (the parasite) and the other is hurt (the host.) Excessive mistletoe can weaken or kill trees, but a parasite does not usually kill its host.

Studies have shown that removal of mistletoe will result in a drop in bird populations, along with other species. Some ecologists argue that mistletoe is a keystone species and plays a crucial role in ecosystems.

Mistletoe can perform photosynthesis and does not rely on the host tree for glucose. Instead, it taps into the host’s xylem. Xylem are the transport tubes that move water and minerals up through the tree from its roots. Mistletoe is a partial parasite and only takes water and minerals from the host.

I was interested to see where the mistletoe was attached to the tree. Different species of mistletoe have different methods, some send out runners. The variety we saw in Southern California attaches to a tree and makes a haustorial structure. This structure looks like a bulb. The mistletoe then shoots many branches out from the structure.

Dispersal of the mistletoe seeds depends upon birds. In Australia, it relies on the mistletoe bird and honeyeaters. In southwestern U.S.A., phainopepla and euphonias are the main seed distributors.

The birds squeeze the seed from its outer coat and swallow it whole. The fruit is covered in a sticky layer of viscin, which is rich in glucose, and envelopes the seed. The seed passes through the birds’ digestive tract within 12-45 minutes.

The sticky layer remains on the seed. When the bird defecates, it must rub its bottom on a branch to get the seed out. The sticky layer then cements the seed to the branch and it begins to germinate and produce its haustorial structure. No part of the mistletoe ever touches the ground in its lifecycle.

So this Christmas, be sure and stand under the mistletoe. After the kissing is through, take a moment and thrill your partner with all you have learned about magical mistletoe!

Do you have any mistletoe stories? Please share in the comments below.