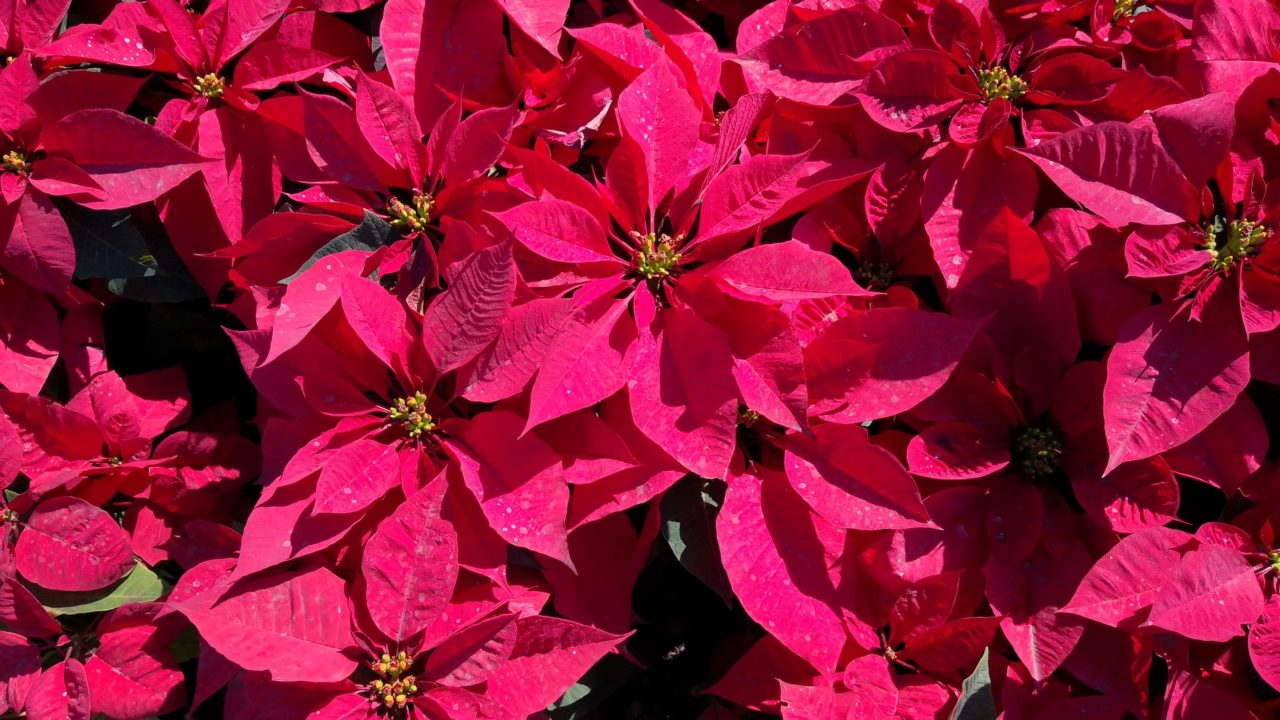 The Red Christmas Flower from Mexico

Every year, on the Saturday after Thanksgiving, I buy poinsettias and begin decorating for Christmas.  It turns out that I am not alone. Over 76 million poinsettia are sold during the six week holiday season in the U.S. This makes it the top selling potted flowering plant.

Commercial cultivation of the poinsettia started in San Diego, California in the 1920s. Paul Ecke started with a native plant from Mexico. That original plant eventually became 180 new varieties. Ecke discovered a grafting technique that caused the seedlings to branch, instead of having long stems. Originally they sold the flowers at roadside stands. For nearly 100 years, three generations of Eckes have expanded the business to make the ranch the world’s leading poinsettia hybridizer.

Tours of the Ecke Ranch used to be a seasonal tradition in San Diego. Eventually the propagation of poinsettias was moved to Guatemalan greenhouses to cut costs. Paul Ecke Ranch was sold in 2012. However, Weidner Gardens in Encinitas still offers “Behind the Scenes” Greenhouse Tours one weekend in November.

Ambassador Poinsett Brings Poinsettias to the U.S. in 1828

In 1828, the plant was first introduced to the U.S. by Joel Roberts Poinsett, the first United States ambassador to Mexico. Poinsett discovered the plants in southern Mexico, in Taxco de Alarcon. He admired the plant, which grows up to 12 feet, and blooms with red flowers in the winter.

Poinsett sent cuttings home to South Carolina and raised them in his greenhouse. He gave the plants to friends and botanical gardens. One of his friends entered it in the first Philadelphia flower show. There it was discovered by florists and first sold as cut flowers. Eventually it was sold as landscaping and potted plants.

Poinsett went on to have an amazing career. He retired as Secretary of War in 1841. He became a founding member of what was later to become the Smithsonian Institute. Back then it was called the National Institute for the Promotion of Science and the Useful.

In the U.S. the plant was originally called the Mexican flame flower or by its genus name Euphorbia. It was renamed poinsettia in 1837, by a historian who wanted to honor Poinsett.

Joel Poinsett died on December 12, 1851. National Poinsettia Day was created to commemorate the day of his death. The date is also important in Mexico as Dia de la Virgen de Guadalupe. Pilgrims often leave bouquets of poinsettia flowers for the Virgin.

A sample, or holotype, or the plant was brought to Europe by Alexander von Humboldt and Aimé Bonpland from their 1803-1804 expedition. You can see the original specimen in the herbarium of the Botanic Garden and Botanical Museum in Berlin. However, it was because of Poinsett that the plant became known throughout Europe.

In many parts of the world the plant is known as “Christmas Stars.” Such as Stella di Natale in Italy and Weihnachtsstern in Germany.

Poinsettias and the Aztecs

The Aztecs called the plant cuetlaxochitl which means “flower that withers, mortal flower that perishes like all that is pure.” The flower was a gift from the gods. The blood red color signified the sacrifices that the gods had made to create the universe, and the debt that must be repaid by human sacrifice.

Montezuma (1480-1520) decorated his palaces with the plant. Poinsettias can’t grow in the high altitude of Teotihuacan so he had them brought by caravan to the capital. In addition, the Aztecs used the red bracts of the flower to make purple dye. The milky white sap was used to treat fevers.

In the 17th century, Franciscan missionaries settled in Taxon del Alarcon, Mexico. The red flower was used for the first time in a Christian ceremony for a nativity procession, The Fiesta of Santa Pesebre. It is believed that the legends about the flower originated at this time.

The shape of the poinsettia flower is a symbol of the Star of Bethlehem and the red color symbolizes the blood of Christ. White leaves represent his purity. In Mexico, the poinsettia is called la flor de Nochebuena which means “ flower of the Holy Night (Christmas Eve).”

The Mexican Christmas Legend of Poinsettias

Pepita, was a little Mexican girl. She felt sad because she had no money to buy the baby Jesus a present to bring to church on Christmas Eve. Her cousin Pedro told her, “Even the smallest gift, given by someone who loves him will make Jesus happy.”

Pepita pulled small branches from a tree and gathered the green leaves together in a bouquet. She placed the bouquet in front of the Nativity scene and closed her eyes to pray. She heard the crowd behind her murmur and opened her eyes. The green leaves had turned red! It was a Christmas miracle.

Although we call the red part the flower, those are actually colored leaves called bracts. The flowers are the small yellow clusters in the center of the red bracts. The bracts are green and change to red when the plant is exposed to 12 hours of darkness, which coincides with winter months. If pollinated, the flowers turn into green pods which contain the seeds.

An enduring urban legend about poinsettias dates back to 1919. An Army officer claimed that his child had died from eating poinsettia leaves. Since then, many people believe that the plant is toxic to children and pets. Poisindex Information Service states that a 50 pound child would have to eat more than 500 bracts before crossing the toxic threshold. They are not toxic, but they will cause indigestion if eaten and the milky sap might cause skin irritation.

Poinsettia are not frost hardy so they need to be grown in greenhouses. Outdoors they need mild climates like Mexico and central America or on the coast in Southern California. Inside  your home, keep them away from drafts and make sure they receive sunlight. Be careful to not overwater them.

Enjoy reading about mythology and nature? Sign up for my monthly newsletter so you don’t miss an article.