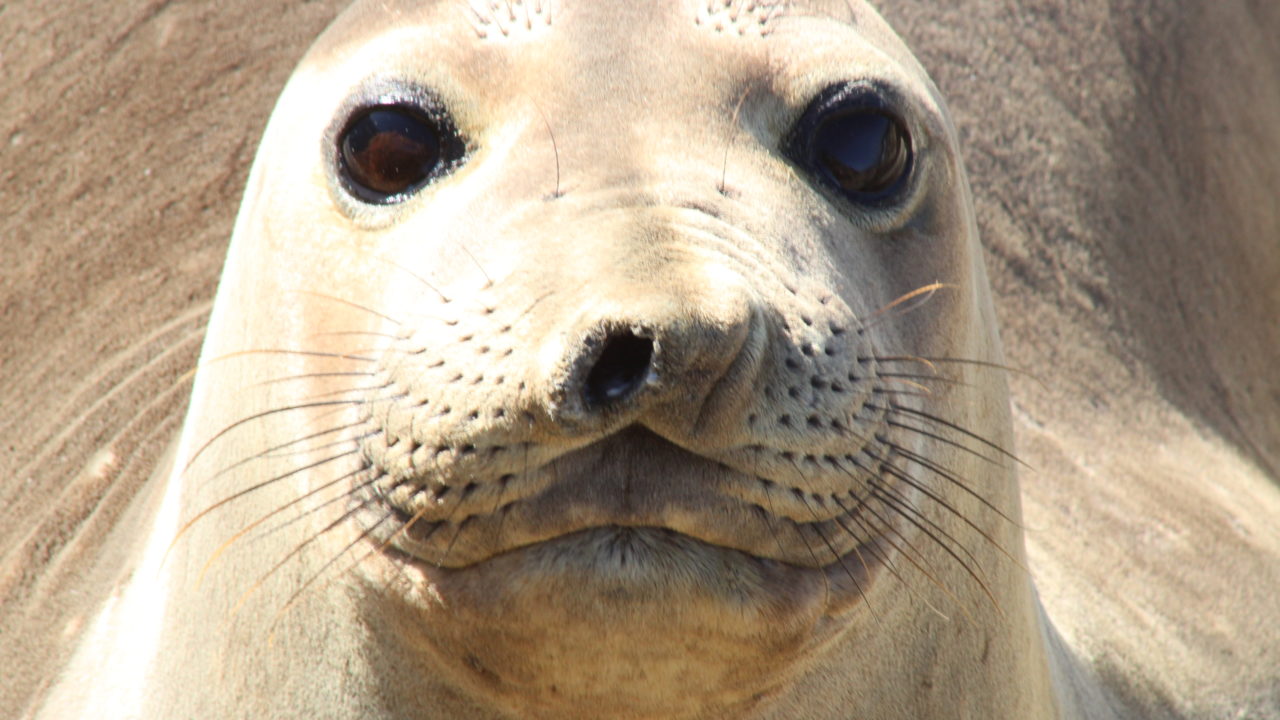 If you have children or love nature, you must plan a visit to this elephant seal colony. A long wooden walkway provides a perfect place to spy on these giant pinnipeds. Elephant seals are visible year round, although certain seasons have specific ages and genders on the beach. Docents from Friends of the Elephant Seals and rangers are available to answer questions.

There is ample parking and a walkway for viewing the seals without disturbing them. Do not attempt to go down to the beach. Not only is this dangerous because male elephant seals are fast and territorial, but all pinnipeds are protected by the Marine Mammal Protection Act.

You can compare elephant seals to the brown sea lions that haul up on the docks in Morro Bay and Avila. This is a cute video to help distinguish seals and sea lions.

Elephant seals are true seals, which means they do not have external ears and move by dragging their hindquarters. They resemble giant worms when they scoot up the beach. Their front flippers are much smaller than sea lion flippers. When swimming, they use their hind flippers for propulsion.

Sea lions have external ear flaps and have a pelvis tucked forward like a four legged animal. They are much more mobile on land. They use their front flippers for propulsion while swimming. The flippers of all pinnipeds are made up of their hand and feet bones.

Male Elephant Seals–My What a Big Proboscis You Have!

Male elephant seals become sexually mature at nine years. Males have sexual dimorphism, which means the males are different than the females of the same species. Other animal kingdom examples include the peacock and the male lion.

Once mature, the male has a giant nose, called proboscis, which gives the elephant seal its name. The nose can be inflated. The nose and mouth make a roaring noise which attracts the females and challenges other males.

Males claim territory on rookery beaches, which includes Piedras Blancas Reserve. The male, called a “beach master” must defend his harem of females from challengers. The chest of the males has a shield made of thickened skin.

The best time to see males fighting at Piedras Blancas is in December and January. Males roar, ram their chests, bite and scrape each other with their bottom teeth which protrude forward. Here is a video of males fighting.

Birthing and breeding season is December through March. Pups are typically born at night and weigh about 60 pounds at birth. Here is a video (go to .39) of a birth.

Pups feed on their mother’s rich milk which has 55% milk fat. (Humans milk has 3-5% and cow milk has 4% fat.) Pups weigh 300 pounds at weaning. Mama nurses her pup for about 24 days and then mates with the alpha bull. After mating, she will return to the ocean alone. The pups remain on the beach until March or April.

I visited in April. The beach had weaners, which are pups which had stopped nursing. Molting elephant seals and adolescent males lounged on the beach. I loved seeing the adolescent males, since they remind me of awkward middle schoolers. If you also love adolescent animals, read “A Field Guide for Understanding Teens.”

Young males don’t get their large proboscis until puberty. It was fun to watch the young males practice fighting and sorting out their social dominance.

Females and young males were molting, or shedding their outer skin and fur. Elephant seals can’t be in the water during this time because they aren’t protected against the cold. Molting lasts until late July.

August has the least amount of seals on the beach, but there will usually be a few stragglers.

From September through October, immature juveniles arrive on the beach and haul out. Adult elephant seals are out at sea feeding during this time, but youngsters between one and three rest on the shore as part of their development.

In November, the juveniles leave the beach and the adult males begin to arrive at the end of the month.

Elephant Seals Eat While Out at Sea

The entire time they are on the beach, adult elephant seals fast. They must return to the ocean to feed and regain their weight. Elephant seals eat prey from the ocean depths and pelagic fish. These include: crabs, squid, octopus, Pacific whiting and open ocean fish.

When males leave the beach, they migrate northward to their feeding grounds from Washington to the western Aleutians in Alaska. Females head north or west into the open ocean or the northeastern Pacific.

Elephant seals can dive more than a mile deep. They dive 5,577 feet deep and can spend 1.5 hours down there in the deep ocean. Seals not only eat, but they also rest while in the ocean depths to avoid their predators–great white sharks and orcas.

Elephant seals can squeeze all oxygen out of their lungs before diving. This enables them to tolerate the tremendous pressure at that depth. They can also tolerate high carbon dioxide levels. Their blubber keeps them warm in the frigid water.

“Moreover, the elephant seal’s blood level of carbon monoxide is 10 times higher than that of average humans, pilot whales, and killer whales, and about two to three times higher than in beluga and Weddell seals. The elephant seal also has much more red blood cells than these other animals. Because red blood cells release carbon monoxide when they break down and die—which happens on a routine basis—the higher levels make sense.”

When the elephant seal surfaces and breathes, the cold air enters its warm body. The water vapor in the cold air condenses. Inside the skull of elephant seals is a structure that collects the condensation. This is how they get fresh water while out at sea.

Elephant Seals May Be the Source of Sea Monster Myth

The male sea lion pops his head three feet out of the water to breathe and only remains at the surface for 3 minutes before diving again. Imagine if you were on a boat in the middle of the ocean and you saw a giant nosed beast emerge and then disappear.

“(People think) at least some of the ‘Cadborosaurus’ sightings made in the north-east Pacific represent encounters with elephant seals. It explains those descriptions of ‘camel-like’ snouts, giant black eyes and weird wrinkled skin referred to by some witnesses.”

Seals Brought Back from the Edge of Extinction

The Piedras Blancas Northern Elephant Seal Rookery didn’t exist until 1990. When you look out at those beautiful pinnipeds, be thankful that they didn’t become extinct.

After whales had been over harvested, commercial hunters focused on seals. Elephant seals were heavily hunted for their blubber to use as lamp oil. By the late 1800s they were believed to be extinct. However, one colony remained in Baja, Mexico.

This comeback story isn’t without a cost. Since all of the elephant seals that exist now descended from between 20-100 individuals, there is low genetic diversity in the species. This is called a genetic bottleneck.

In evolution through natural selection, high levels of genetic diversity cause less competitive traits to be bred out of a population while beneficial traits remain.

With less genetic diversity, there is a higher risk of genetic mutations because more recessive traits exist in the population. There is also inbreeding within the remaining population which increases mutations. This makes them have a higher risk for deformities, have less immunity to disease, and less ability to adapt to a changing environment.

Just north of  the elephant colony, across from the Hearst Castle entrance road, is San Simeon Pier. This is part of William R. Hearst Memorial State Beach. There is an interpretive display of early shore whaling and older buildings have been preserved. The beach is out of the wind and a nice place for kids to play.

Don’t miss the opportunity to see these incredible elephant seals up close. Be sure and add a stop to Piedras Blancas Northern Elephant Seal Rookery to the itinerary of your Retro Roadtrip to Morro Bay.