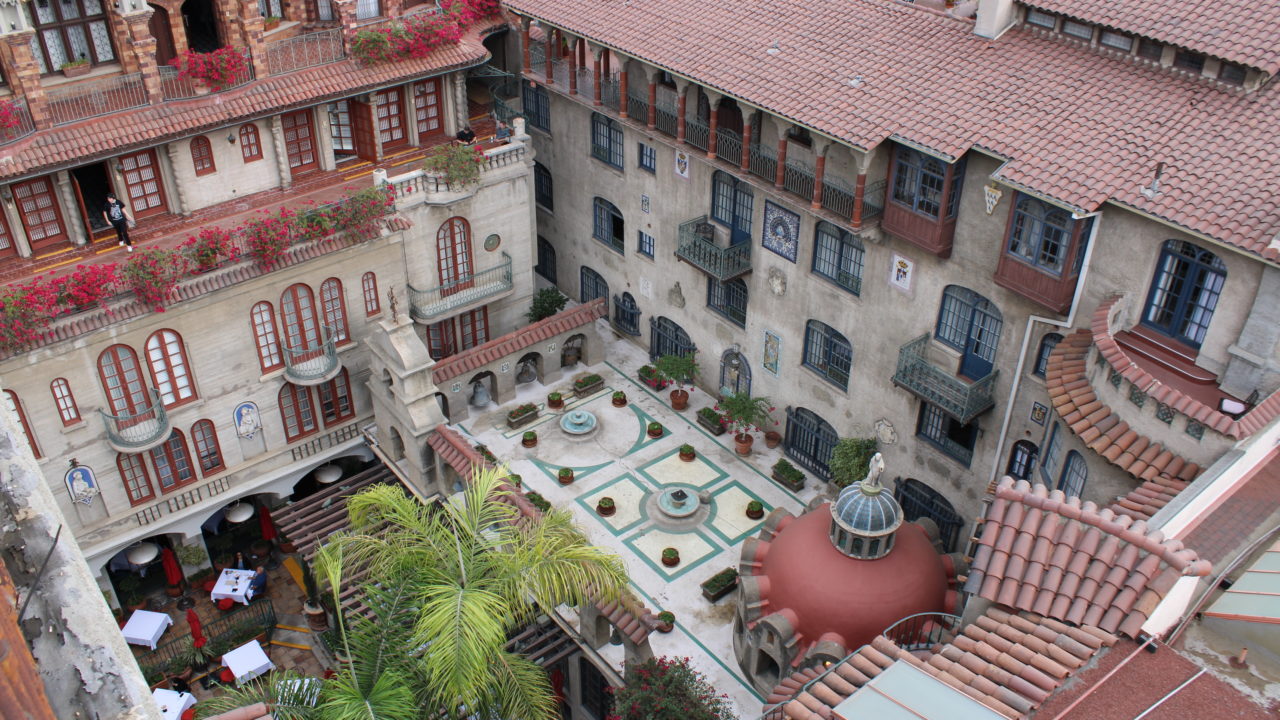 The city of Riverside has done a wonderful job protecting historic buildings. In 1977, due to efforts of local advocates and government officials, the Mission Inn was designated as a National Historic Landmark. The Mission Inn Foundation’s story of how this incredible structure was saved from neglect will warm the heart of any preservationist.

Frank Miller realized the tourism potential of a grand hotel in Riverside. In the early 1900s, California experienced a “second gold rush” created by citrus agriculture. Navel oranges, a winter fruit, thrived in the mild climate and rich soil of Riverside. In 1882, the California Southern Railroad line, connecting Barstow to San Diego, went through Riverside.

The Spanish Missions were romanticized in the bestselling novel, Ramona by Helen Hunt Jackson, published in 1884. The setting of the novel was right after the Mexican-American War and it portrayed the Rancho life of the Mexican settlers and the greedy American settlers determined to drive them off their lands. The novel helped attract tourists to Southern California eager to see the settings, including Temecula, San Diego, Piru and San Bernardino.

The Mission Inn incorporates architectural details from twenty California Missions. Started in 1902, construction continued for thirty years. Three more wings were added: the Cloister, Spanish Wing and the Rotunda Wing. The hotel brings to mind the Spanish region of Andalusia, including Seville and Cordoba.

Wander through the hotel’s narrow passageways and discover details such as a medieval-style clock, a five-story rotunda, castle towers, minarets, flying buttresses, Mediterranean domes and a pedestrian sky bridge. Sprinkled throughout the building are Oriental vases, antique furniture, tapestries and statues. Miller traveled throughout Europe bringing home treasures for his hotel.

The courtyard has a statue of Frank Miller holding a parrot, and real parrots in a green domed cage. Everywhere you will discover bells. At one point the hotel had a collection of 800 for its Garden of Bells. In the lobby, you can see a bell from 1247, called “the oldest bell in Christendom.”

Walking around the hotel feels like entering into another time. The first time I stayed at the hotel, I didn’t know a costume party was occurring. As I looked down the darkened halls, I thought I was seeing ghosts in Edwardian dresses. The next time I stayed was to attend a Romance Writers Retreat. The hotel was the perfect setting for our 1920’s Speakeasy Party, complete with Charleston dancing and bathtub gin.

I’m not the only one who appreciates the ambiance. Several scary films have been shot at the hotel including The Vampire in 1915, The Man in the Iron Mask in 1997, and Eddie Money’s 1982, vampire-inspired video, “I think I’m in Love.”

The rooms in the hotel are unique. They have wooden mission-style doors and crisp white bedding. The last room I stayed in had two walls of windows, thick adobe-type walls, beams on the ceiling, and arched doorways. Needless to say, the hotel is a popular wedding spot. Bettie Davis married there in 1945. Ronald Reagan and his wife Nancy spent their honeymoon at the Mission Inn.

The hotel is famous for its winter Festival of Lights, when it is decked out top to bottom with lights and poinsettias. I am partial to fall and their Pumpkin Walk. The lobby has decorative squash everywhere and pumpkins line the walkways. February celebrates romance with the Festa dell ‘Amore.

A pedestrian mall abuts the Mission Inn. Mrs. Tiggy-Winkle’s is a charming gift shop that I make sure to visit several times a year. The owner organizes the shop thematically and just walking around is a treat for the senses. She stocks unique holiday jewelry that I haven’t seen for sale anywhere else–perfect for any teachers on your shopping list.

Don’t miss Downtowne Bookstore, tucked beside the Mission Inn. The shop has second hand books and will thrill any bibliophile with its friendly, homey vibe. The owners have collected owls for decades and their collection covers the back wall, including macrame owls from the 1970s and a taxidermy owl.

If you love mixed drinks then ProAhibition should be your next stop. I had Besame Mama and it was a perfect gin drink–not too sweet–with a frothy egg white. All the food looks terrific, but I can personally vouch for the mac n’ cheese and the burgers with garlic fries. On the next block is Mission Galleria, a huge antique mall. I collect citrus crate labels and this mall has a wonderful selection. Four stories filled with different consignment areas–be sure and give yourself enough time to explore it.

Walk down Mission Inn Avenue and see the historic Fox theater, called the Fox Performing Arts Center. Built in 1929, the theater was designed by  Clifford Balch and engineer Floyd E. Stanberry in Spanish Colonial Revival style. This architectural style is marked by the use of smooth plaster (stucco) walls, clay tiles, and arches.

The theater holds an important role in  movie history. Throughout the 1930s and 1940s, it was used for Hollywood screenings because the demographics of Riverside echoed small town America. It was also the first theater to screen Gone with the Wind, in 1939. The theater was renovated in 2009 as part of the Riverside Renaissance Program.

Continue walking down Mission Inn Avenue and pass a row of murals. Across the street you will discover a folk art gem called Tio’s Tacos.

Founded in 1990, by the Sanchez family, Tio’s Tacos is much more than a Mexican restaurant. Martin Sanchez, an immigrant from Sahuayo, in Michoacan, Mexico filled the giant patio with art he created from found items such as coffee cans, old bones, glass bottles, used toys, bottle caps and shells.

Using mostly cement and chicken wire, Sanchez has created fascinating folk art sculptures. Many of them reflect Mexican themes such as Day of the Dead skeletons, and mariachi sombreros. There are several sets of wings, so the Instagram opportunities are endless.

Take a retro road trip to Riverside to savor its unique attractions. This article touched on only a few of the historical buildings, and there are many others to explore. Once museums are opened, you will have another excuse to visit Riverside. The California Citrus State Historic Park tells the story of California’s second gold rush and will be the subject of a future blog.

Do you know any other interesting towns that I should visit? Please tell me in the comments below.