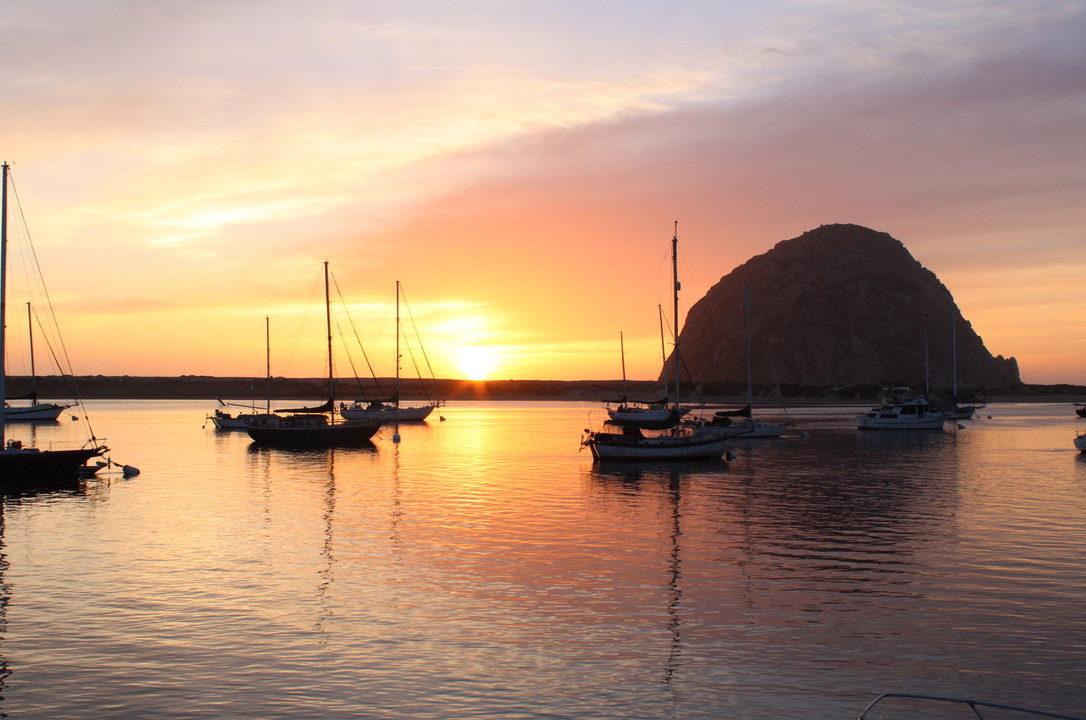 Smell the salt air, feel the cool ocean breeze on your face and hear the barks of sea lions as you wander through the town. Morro Bay is a city rich with history and a non-touristy, relaxing vibe. It is a terrific destination for families and couples and only two hours north of Santa Barbara on 101 North.

Morro Bay has two commercial areas. The embarcadero lies along the waterfront. Main Street is located up the hill and has lovely antique and vintage clothing shops.

On Main Street, Coalesce Bookstore is a real treat with both used and new books. Next door is Top Dog Coffee Shop where you can sip the perfect latte in a beautiful outdoor patio.

See the Sea Otters from the Morro Bay Embarcadero

Sea otters swim throughout the Bay and you can watch them while eating at the bayside restaurants. A nursery of otter moms with their fluffy pups float near the Great American Fish Restaurant. Another group of otters, called a raft, clusters near the mouth of the Bay, close to Morro Rock.

Sea otters were heavily hunted for their lush fur. They have the thickest fur of any animal because, unlike seals, otters do not rely on blubber for warmth in the cold Pacific waters. In 1911, the Fur Seal Treaty gave the otters protection from hunting, but it was nearly too late.

Ecologists believed that southern sea otters were extinct until a colony of 50 otters was found in Big Sur in 1938. The populations in Morro Bay and Monterey Bay are descendents from that group. In the 1970s, otters received additional protection from the Marine Mammal Protection Act and the Endangered Species Act.

Otter populations have increased, but are still far below their historic numbers. At one time they ranged from Alaska south to Baja California, Mexico. Big Sur resident and environmentalist, Margaret Wentworth Owings, focused the spotlight on otter conservation through her group, Friends of the Otters, which she established in 1968.

This video explains the concept of keystone species and discusses the importance of sea otters. The theory of keystone species was developed in 1969. It states that some predators are so important that they impact the health of an entire ecosystem. The wolves of Yellowstone are perhaps the best known example.

Morro is Portuguese for “crown shaped hill.” Morro Rock was an important navigational landmark because, at 576 feet tall, it was visible for miles. Formed 23 million years ago, the rock is a volcanic plug.

A volcanic plug is formed when magma hardens within a vent of a volcano. Over the years, the volcano itself erodes away, leaving only the plug. Morro Rock is the last volcanic peak in the chain of the Nine Sisters, a line of volcanoes that extended from San Luis Obisbo to Morro Bay.

Morro Rock was mined for years and its stone was used to create the breakwater. In 1968, the Rock was designated as a California Historical Landmark. Rock climbing is prohibited because it is a nesting site for peregrine falcons which were nearly wiped out due to DDT and illegal collection by falconers.

If you are interested in geology, ecology and anthropology, be sure and visit the Museum of Natural History in Morro Bay State Park.

The Embarcadero was Originally Built as a WWII Military Training Base

Today, the embarcadero provides a long stroll filled with shops, boat rentals, inns and outstanding seafood restaurants. You can also book cruises around the bay. Be sure and bring your hoodie because that ocean breeze is cold.

Although established in 1872, as a fishing village and farming community, development of Morro Bay took off during WWII. The military made many improvements in the town, including two “T” piers, the embarcadero, and widening the fill between Morro Rock and the shore.

The Bay provided a perfect location to train soldiers how to board ships. The trainees would board small boats for the short trip to the bay side of the pier and then climb rope ladders up and over the top.

“Many of these recruits had only been in the service a few weeks and…had little marine experience.  Loaded with helmet, rifle, and various ‘ditty’ bags, they had to push off from the small, bobbing boats, grab the ladder, and climb without getting stepped on, cutting up their hands, or falling into the chilly bay waters.”

Troops practiced assaults and landings on the beaches. They conducted amphibious assaults on  Morro Rock. To learn more about the military history of this area, visit the Morro Bay Maritime Museum. It has submarines and ships in its outdoor display area. Inside are interpretive displays of the area’s rich maritime history.

Get Your Midcentury Tiki Culture Fix

Near the Maritime Museum, on the embarcadero, is the Harbor Hut. This family owned restaurant began in 1951. The classic A-frame building has a triangular roof that reaches the ground. It echoes the triangular shaped halau wa’a, or canoe sheds of Hawaii. The ends of the roof beams have shark faces. Tikis at the entrance and rattan furniture inside complete the tiki decor.

At the opposite end of the embarcadero is the Shell Shop. The Shell Shop is in a classic midcentury building with a flat roof and pebble facade. Inside are bins of every shell you can imagine and the perfect place to purchase Tiki decor items including nets and glass ball floats. Read How to Create a Tiki Bar for inspiration.

The Shell Shop began in 1955, when 10-year old David Thomas began selling abalone shells from a lemonade stand for 10 cents each. His father, Laurence Thomas was an abalone diver and the shells were a byproduct from the abalone industry.

“Shelled animals that are fished, harvested, or grown in aquaculture will be used to feed our global population…regardless of whether the empty shells are utilized or not, they will continue to be harvested for consumption. The use of shells as a byproduct gives struggling fishermen another source of revenue and allows us to enjoy the beauty of the ocean…”

The family opened the Shell Shop and sold abalone shells and then expanded to other byproducts of different shellfish industries. They imported shells from the Philippines, Vietnam, India and Japan. The Shell Shop was a pioneer in creating a “green” business out of what others considered waste.

Between 1930 and 1960, Morro Bay was the principal processing port for abalone. Red abalone was most common, but seven species could be found from Alaska to Mexico. Abalone lived in kelp forests which grow in cold waters that have upwelling.

“Commercial abalone diving was exhausting and dangerous work. A diver had to wear several layers of clothing to ward off the cold before putting on diving equipment weighing nearly 100 pounds and 50-60 pounds of weights.”

Historic photos of the time show piles of abalone shell waste from the processing plant. In 1957 alone, 5.4 million pounds of abalone were harvested in California. However, by the end of the 1970s, overfishing and kelp forest loss eliminated the abalone industry.

I love oysters and my favorite restaurant in Morro Bay for this delicacy was The Great American Fish Company on the embarcadero. If you love oysters too, check out 10 Arousing Facts About Oysters.

Olympia oysters, the only native California oyster, were once abundant in Morro Bay. By the 1930s, overfishing caused supplies to dwindle. From 1953-2001, Pacific oysters were raised on the mud flats off White’s Point.

Morro Bay is famous for fishing. Charter fishing boats, whale watching, and private trips are all available. For a quiet alternative, rent a kayak. Explore the Bay and get close to sea lions and otters while a shy harbor seal spies on you from afar.

Commercial fishing was important to Morro Bay through the 1990s. Groundfish, salmon, Albacore tuna, crab and sardine were all caught.

Morro Bay is a retro roadtrip that will refresh your city-weary soul. The relaxed atmosphere, plentiful wildlife and maritime culture make it a great visit for families, as well as a romantic get-away for couples.

Be sure and make the 45 minute trip north to visit the Northern Elephant Seal Rookery in Piedras Blancas.