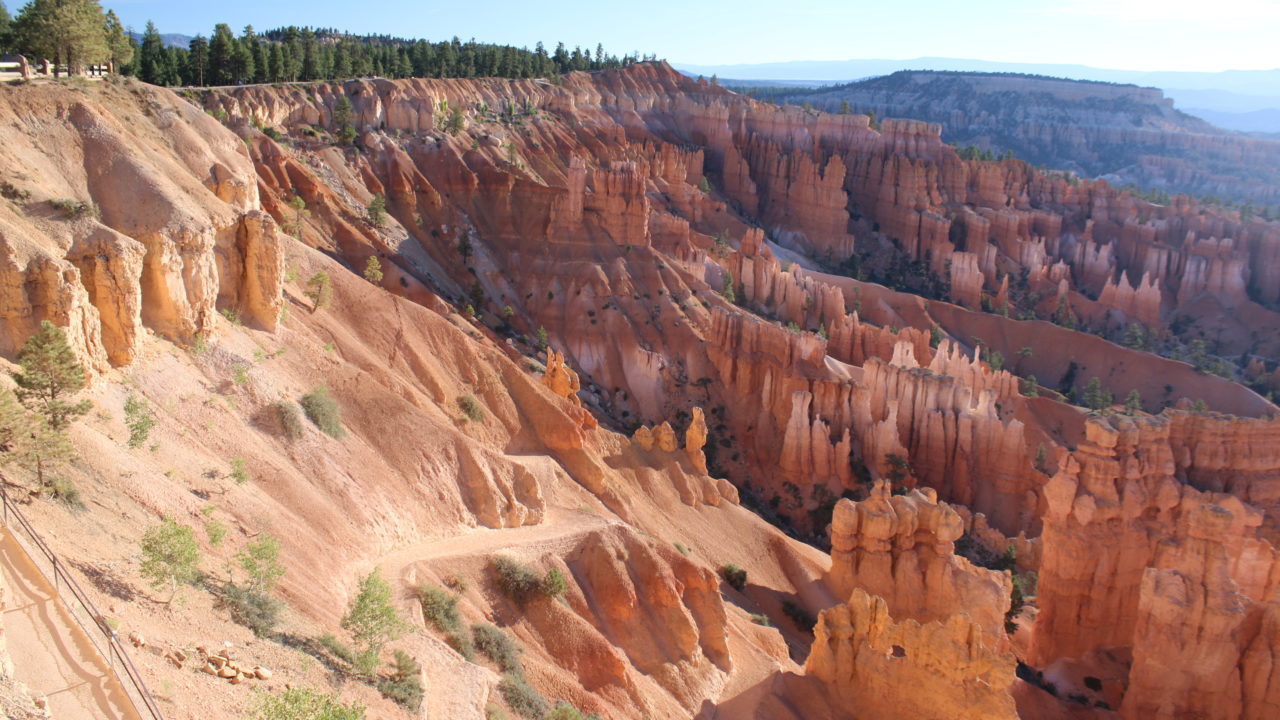 Bryce Canyon National Park, Utah is Home to the Hoodoos

“Union Pacific Railroad served Bryce Canyon well as it grew to national park status. The railroad’s vision of the site’s potential for tourism culminated in the creation of the ‘Grand Circle Tour,’ a tour that traveled to several parks in one trip.”

Bryce Canyon is one of my favorite National Parks. The orange, pink and peach hoodoos are gorgeous and set my imagination on fire as I look for faces and stories in the rocks. In addition, I feel that Bryce Canyon Visitor Center, Lodge and its Ranger Interpretive Programs are among the best in the National Park System.

Hoodoos need specific geologic conditions to develop, but they do exist in other parts of the world too. No matter where they occur, their otherworldly appearance inspires creative names. In other areas they are called: goblins, fairy chimney, ladies with hairdoos, tent rocks, pinnacles and earth pyramids.

“Hoodoo comes from the Southern Paiute word (ooh doo) for being afraid or showing fear. The way we say it is ‘uuuudoooooooooooo’. It’s an expression of scary.”

The Paiute Legend of the Hoodoos

Once upon a time there was a race called To-when-an-ung-wa, the Legend People. They built grand buildings and spires in Bryce Canyon.

However, they were greedy and selfish. In the springtime they would drink up all the streams and rivers. Come summer, there would be no water for the other living creatures. In the fall, they ate all the pine nuts and left nothing for the animals to eat in the winter.

The plants and animals prayed for help. Coyote, a powerful god, heard their pleas. As a trickster, Coyote designed a clever trap to punish the Legend People. Knowing of their greediness, Coyote invited them to a giant banquet and promised them all they could eat.

The To-when-an-ung-wa came to the banquet dressed in their most colorful clothes and warpaint. Coyote began changing them to stone. They ran for the edge of the canyon, pushing and crowding at each other. Coyote chased them until all were turned to stone.

Everywhere you look while hiking, you can see the remains of the ancient city and the evil inhabitants that were turned to stone in Bryce Canyon.

I love museums and learning and the Bryce Canyon Visitor Center is excellent. Make sure you take time to explore the exhibits. Kids even have prairie dog tunnels to crawl through.

The Visitor Center has displays that make the fascinating geology of the area understandable. Casts of fossils found in the different layers are accompanied with drawings. There is a hands-on model that allows visitors to understand faulting.

Photographs document hoodoo formation and there is even a scavenger hunt for visitors to search for specific hoodoo features. I created a bucket list item to visit the other hoodoos of the world (China, Australia, Canada, Chile, France and Turkey.)

Taxidermy animals and sounds teach the ecosystem of Bryce Canyon. Native Americans of the area tell their stories through videos.

The gift store has a great book selection. I found several books on Native American legends, something that I could not find at Zion. Ruby’s Inn, which is located outside of the park, has an incredible book selection so be sure to stop there as well if you are a reader.

The Bryce Canyon Lodge was built in 1924 and 1925. Gilbert Stanley Underwood designed it, along with the Grand Canyon and Zion Lodges. The green roofed lodge has a unique shingle style, giving it a wave-like pattern. The lodge was built with local materials in National Park rustic style. It is the only one of the three Underwood lodges completely intact.

Inside the lodge, several photos tell the history of the park and the role of the railroad in its promotion. The sandstone brick fireplace is beautiful. In the dining room, you can see the first flag given to Utah when it became the 45th state in 1896.

See the Grand Staircase and the Bristlecone Pines

The rangers suggest that visitors enter the park and drive to Bryce Point, the highest lookout point. From this location you can see the Grand Staircase. Unlike most sedimentary rock, the Grand Staircase is not disrupted by uplift or intrusions.

This geologic feature is unique because it was cut by the Colorado River. The Grand Staircase begins at Bryce with the Pink Cliffs of the Claron Formation. It steps down to the White Cliffs, Vermillion Cliffs, Chocolate Cliffs and ends at the Grand Canyon.

“It is impressive to ponder the erosive power of the Colorado River and its tributaries as one envisions the amount of rock that has been carried away by the river to form the Grand Staircase (~11,000 vertical feet.) Indeed, Bryce Canyon can be considered the uppermost rim of the Grand Canyon.”

We hiked the short Bristlecone Pine Trail. Bristlecone Pines are the oldest non-cloning trees in the world. The oldest one is 4,852 years old and located in California. At Bryce, the oldest one is a mere 1,500 years. The trees are uniquely adapted to survive high winds, thin soil, low temperatures and little water. The U.S. is the only place bristlecones grow and, even then, they are only found in five states: Colorado, Nevada, California, Arizona, and Utah.

As you follow the road down hill, all the look outs will now be on your right side. You are above the hoodoos looking down at them. We visited in early June and crowds were not a problem. Bryce Canyon also has shuttle service throughout the park.

Hiking Among the Hoodoos

Most of the trail heads are located at Sunset Point and Sunrise Point. We got an early start and had the hiking trail to ourselves for a little while. After the crowds of Zion, this was a real treat.

We started on the Navajo Loop trail and then joined the Queens Garden Trail for the hike out. We began in the shade, and ended in the sun, as we hiked uphill. This trail is moderately difficult and provides a view of the hoodoos from below, looking up.

Holes and windows, along with the hoodoos, are on the trail.

Geology of the Hoodoos at Bryce Canyon National Park

The unique geology of the hoodoos is the result of specific layers of sedimentary rock, geologic fractures and the climate.

During the Jurassic Period, North America was located closer to the equator within a dry trade-wind belt. In Utah, this created a desert of sand dunes. Eventually, cementing agents turned the sediment into sandstone.

As time passed, sea-level rose and the Western Cretaceous Interior Seaway flowed north-south through North America. Formations of sandstone were deposited over many years.

Millions of years after the Inland Sea withdrawal, the Claron Formation was deposited in broad inland lakes. Climatic changes affected the lake levels and different sediments were deposited including limestone, dolomite, and carbonate rocks. (Video)

Iron and manganese in the fresh-water deposits of the Claron Formation weathered and created the pink and red colors seen through the park. Red, or rust-colored, soils have more iron. Green, gray and black sandstone was formed when iron containing soils were deposited in deep water with little oxygen to allow rusting of the iron. Limestone appears whitish and has little or no iron.

Plate tectonics, including the uplift of the Colorado Plateau, caused two fracture systems to intersect and create a cross-hatched pattern of weakened rock.

Unlike Zion and the Grand Canyon, a river was not the major cause of erosion in Bryce National Park. For this reason, it is technically not a canyon.

Precipitation from rain and snow also cause erosion. At Bryce, 180 days out of the year temperatures swing between freezing nights and warm afternoons.The freeze-thaw cycle is when water from precipitation enters cracks and the soil. When the temperature drops, the water freezes and expands–this breaks the rock apart.

Bryce Canyon has hoodoos and views that you can’t find in any other National Park. The elevation makes the temperatures more comfortable in the summer and the crowds are thinner than at Zion. Be sure and stop by the Visitor Center and learn something new!

I’ll leave you with a little call and response my dad taught me when I was a kid.