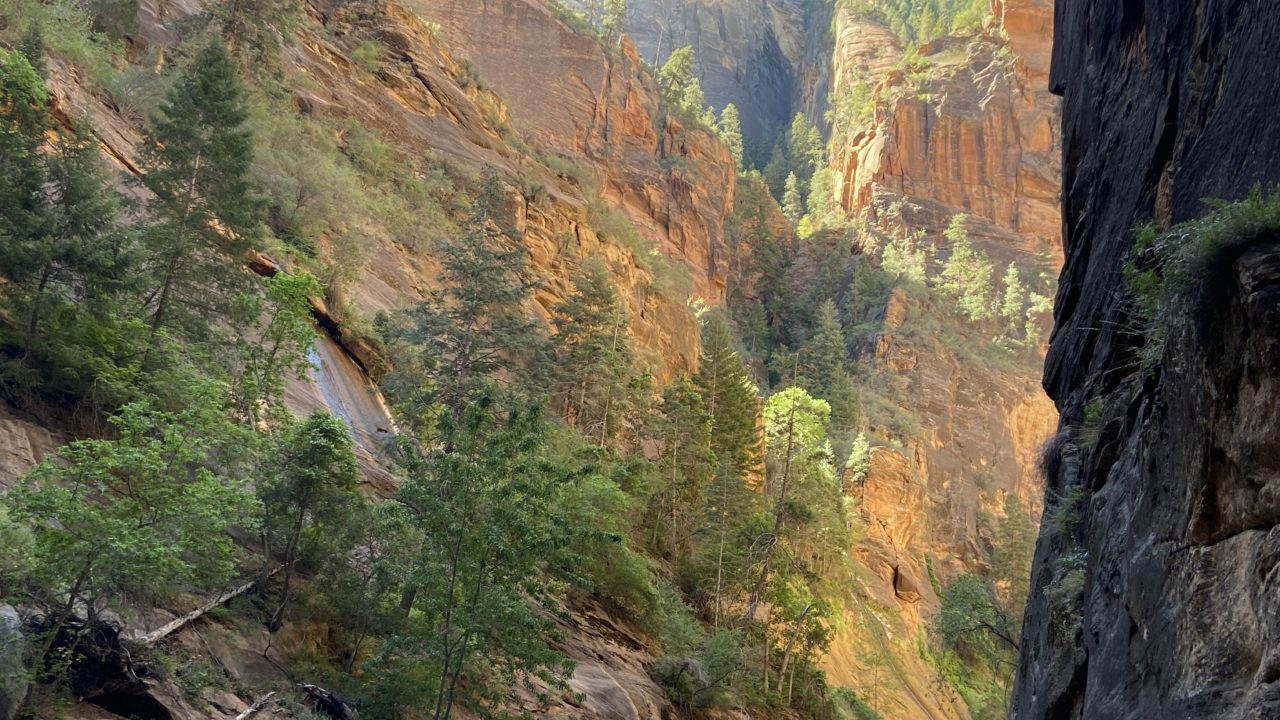 “Triassic and Jurassic rocks exposed in the cliffs of Zion National Park tell the story of an ancient desert landscape where mud, silt, and wind-blown sand accumulated in large quantities during the age of dinosaurs.”

Sandstone makes up the canyons, cliffs, temples, and towers of Zion. Sand, silt and mud from Jurassic and Triassic times were buried and compacted. Eventually, cementing agents turned the sediment into sandstone.

The Jurassic-aged Navajo Sandstone creates the prominent temples and towers of the park. They were once sand dunes. Beneath the Navajo Sandstone are the Kayenta and Moenave Formations that were once silt and mud. The Virgin River eroded the deep canyons into Zion over the past two million years.

When our close friend, Jeff, moved to Utah to work for East Zion Jeep Tours, we knew we had to take this opportunity to visit him and explore Zion. East Zion Jeep Tours operates out of Zion Ponderosa Ranch Resort which is a huge property that offers camping and lodging, as well as activities and adventures for groups.

At 6 p.m. we started our ride to the overlook to see the sunset. We rode in the back of the jeep with five other campers. Although hot during the day, the ride was cold. Be sure and wear a sweatshirt and pants for evening activities.

The ride itself was a thrill. Jeff, our guide, played movie-theme music as we jostled over the ruts and rough trail. It felt like we were on a real-life Indiana Jones ride at an amusement park.

At the overlook we could see Zion National Park and the surrounding wilderness. Some people had packed a cooler with drinks and chairs. A darling couple in their 20s proposed to each other at this romantic location.

Canyoneering in the Slot Canyons

Zion National Park has many slot canyons leading down into the greater Zion Valley.  Canyoneering trips involve hiking, scrambling, and then rappelling down the slot canyon systems.

Trips can last between 2-8 hours. I did one in four hours, dropping over 1200 feet into the upper reaches of the Narrows, in 12 separate rappels.  The views constantly change as the angle of the sun moves across the sky, creating different lighting.  Midday is best for getting the most sunlight into the slot canyons.

Hiking the Riverside Walk on our way to the Narrows

We got an early start and East Zion Adventures dropped us off at the Riverside Walk trailhead by 9:00 a.m.

To reach the Narrows, we hiked along the Riverside Walk. This paved and mostly shaded walk is for all fitness levels and the first 0.5 miles is wheelchair accessible. The trail goes alongside the Virgin River and ends at the Narrows trailhead.

Riverside Walk has hanging gardens. Hanging gardens grow where groundwater seeps out of the cliff walls. This happens where water that is percolating through the Navajo Sandstone hits the denser Kayenta Formation. The water oozes diffusely at the contact line from the cliff instead of emerging as a point source, like a spring. Plants grow in this vertical water source and create a microhabitat.

This hike is primarily over boulders inside the Virgin River. The uneven bottom makes footwear that stays on your feet and protects your toes vital. I wore my running shoes and they worked well and dried out quickly in the desert air. You also need a walking stick to keep your balance.

The Narrows can be strenuous. You hike into the canyon through the water of the Virgin River. Tall cliffs on either side of you provide shade in the morning but it is hot by the afternoon. You hike in and hike out so you decide your distance. However, walking in the cold water masks how tired you may have become.

I admit that I overdid it on this trail. We hiked in 3 miles, for a total hike of 6 miles that took us 4.5 hours. I used my walking stick for balance every step of the way and this made my muscles tense. Also, because there was no place to go to the bathroom, I purposely didn’t drink as much water as I should have. As a desert rat, I know better, but I still ended up with heat exhaustion.

The next day, after I had rested and rehydrated, I felt proud that I had done the hike. The photos alone made it worth it. I would just caution middle-aged or older people to listen to their body. However far you hike in is the same distance that you need to hike out and it will be much hotter.

Exploring Zion on your Own

Zion is hot and crowded in the summer months. Our trip was during the second week of June. If you plan on hiking in the park, make sure you set your alarm early to beat the crowds and the heat of the day. There is very little parking inside the park so be sure and factor in time for catching shuttles into your itinerary.

On our first day, we arrived in the afternoon so we knew our hiking would be minimal. We explored the Zion Visitor Center and the gift shop. After a short hike up Watchman Trail, we took the shuttle to Zion Lodge.

Most of the National Parks have beautiful lodges. Union Pacific Railroad advertised the fancy lodges to attract tourists on their railway journeys back in the early 1900s. However, I found Zion lodge rather disappointing. The nicest feature was the lawn with enormous trees in front of the lodge. This area provides a welcome respite from the desert heat.

Zion Lodge was built in 1924. It was designed by Gilbert Stanley Underwood. Underwood also designed the beautiful Bryce Canyon and the Grand Canyon lodges. However, the National Park Service Director wanted Zion to be a small-scale lodge so that it would fit in with the existing pioneer homes. The original Zion lodge burned down in 1966. The replacement structure was remodeled in 1990 to make it look like the historic lodge.

The Fight Over the Naming of Zion

In 1909, President Taft designated the area as Mukuntuweap National Monument. This was the historical Indian name for the region. The word is Southern Paiute, and means either “straight canyon” or “straight arrow.”

“The group known as the Basket makers once hunted, gathered, and grew crops in that hypnotic desert oasis. Their descendants, the Paiute, spent time at what they called mukuntuweap…and still live in southern Utah. The changing of the name rejected the cultural ties one living band of people had with the place in favor of another: the white Mormon pioneers who called it Zion.”

Zion is a biblical word meaning a place of peace and refuge. It means even more to the Mormans. The original Morman pioneers were fleeing religious persecution in the eastern states. They moved west hoping to establish an independent Morman realm. They “gathered in Zion.” The word “Zion” appears 53 times in The Book of Morman.

“Eventually, the term Zion itself took on meaning as a symbol of Mormonism, embracing such qualities as courage, dedication to the cause, physical endurance, resoluteness, ingenuity, and faith.”

In Zion Canyon, the first Morman pioneer, Joseph Black, established a farm on the canyon floor in 1861. More families followed and established the town of Springdale. In 1863, Mormon pioneer, Isaac Behunin, built a one-room log cabin and farm near the site of Zion lodge. He named the place Zion Canyon.

The acting director of the newly created National Park Service, Horace Albright, changed the name, in 1918, to Zion National Monument. In 1919, Congress enlarged the park and redesignated the monument as Zion National Park.

“To…Mormons, applying the name Zion to the canyon in which they lived and worked was a profoundly important expression of cultural possession…These canyonlands were once fearsome wilderness, but now they had been made habitable by Mormon pioneers at great sacrifice.”

The story of Horace Albright and Stephen T. Mather, the first director of the National Park Service (NPS), is fascinating. Stephen T.  Mather was incredibly charismatic.

Mather deserves most of the success for the creation of the National Park Service in 1916. His enthusiasm and persuasiveness with Congressional leaders was legendary.

According to Heather Hansen, author of Prophets and Moguls, Rangers and Rogues, Bison and Bears, Mather was possibly bipolar. Mather’s manic periods of enthusiasm and work were followed by intense periods of depression.

What Causes the Rock Colors of  Zion?

The Navajo Sandstone grains had iron-bearing minerals in them and, when exposed to oxygen before burial, created the red rust color.

The white layers occurred after burial. Acidic groundwater moved through the pore spaces of the rock and “bleached” it by dissolving the iron. Pink-colored rock represents the transition zone between the two.

Black streaks, called desert varnish, are the precipitates of iron and manganese. These are left behind as groundwater and rain evaporate from the rock face.

The Navajo Sandstone was deposited in an ancient sandy desert, (also called an erg), much like the Sahara Desert. At the time, North America was only 10-30 degrees north of the equator and in the Earth’s dry trade-winds belt.

The desert erg covered more than 100,000 square miles. It was thickest, 2,200 feet, at Zion National Park. You can see crossbedding, the remnants of ancient sand dunes, at Checkerboard Mesa.

While still a sand dune, quartz sand grains moved up the gentle windward side of a given dune, at the crest they would avalanche down the steeper dune face. This creates crossbedding that is still visible in the sandstone.

“The compass direction of the dipping laminae  (layers) that comprise the crossbedding indicates the direction that the Jurassic winds were blowing during deposition.”

We only spent three days in Zion because we were moving on for more adventures. Be sure and read my Rock’in Road Trip to Bryce Canyon National Park.

Zion National Park is an amazing place that offers outdoor thrills and geologic wonders. Plan ahead, hydrate and wake up early so you take advantage of all that this park has to offer. We didn’t do the famous Angels Landing Trail or the Emerald Pools Trail. These are on my bucket list for future visits.

What are your favorite National Parks to visit? Share your memories in the comments below!