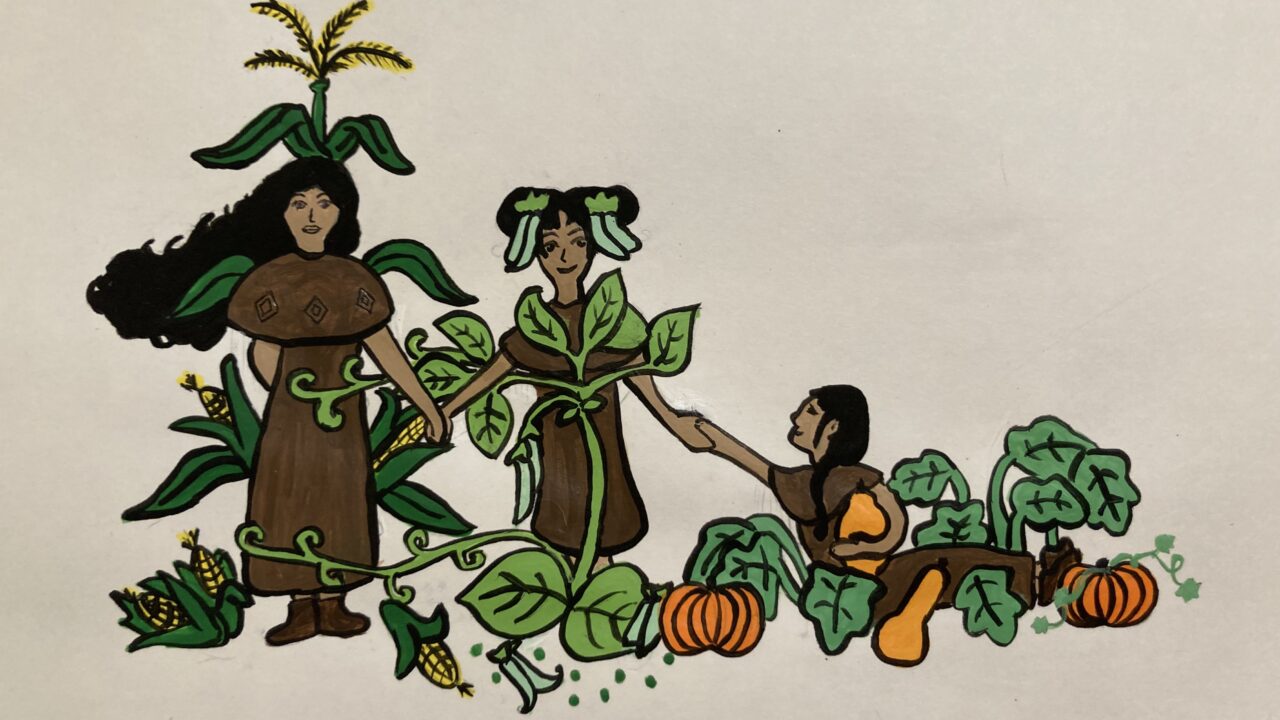 This Thanksgiving, weave Native American stories, recipes and crafts about the Three Sisters into the festivities. The Three Sisters are the crops of corn, squash and beans traditionally grown together in mounds by North American indigenous people.

Long ago, before the earth was created, there was an island in the sky populated by the sky people. Sky Woman, pregnant with her first child, was on a walk one day. She saw that an uprooted tree had created a hole and light shined up, out of the ground. Curious, Sky Woman knelt down and stuck her head in the hole.

“There is another world far below made of water,” she murmured to herself. The light glinting off the waves and the salt smell of the air enticed her.

She leaned further into the hole to get a better look. Her hand slipped on the muddy side and she fell into the cavity and out the other side. She plummeted through the air.

Sky Woman cried out and the animals in the ocean looked up and saw her falling.

They asked a giant turtle to catch her on his shell. Then the animals dove deep and brought up mud and earth from the bottom of the sea and spread it on the shell of the turtle to create a cushion.

The birds flew up and helped slacken Sky Woman’s fall.

Sky Woman landed without injury in the mud on Turtle Island. Many years later, Turtle Island came to be called North America.

Sky Woman gave birth to a daughter and the two of them lived in joy on Turtle Island. Her daughter grew into a beautiful woman. But her allure didn’t go unnoticed. The West Wind seduced her and she became pregnant with twin boys.

The birth of the twins was traumatic. With her last breath, the daughter whispered, “My body will grow the plants that will sustain the people.”

Sky Woman wept as she buried her precious daughter in the earth of Turtle Island. But her daughter’s dying wish came true.

Where her daughter’s hands lay, bean plants sprouted. From her breasts grew corn stalks and from her bellybutton grew squash vines. Sunflowers grew from her legs and sacred tobacco from her head. The strawberry plant sprouted from her heart and her feet grew sunchoke, the original potato.

Long ago, there were three sisters who lived in a field. Even though they were very different, they loved each other so much that they couldn’t imagine living apart.

The youngest sister couldn’t walk yet, but crawled along the ground. She dressed in shades of green.

The middle sister was sturdy and strong. She dressed in orange, yellow, white and green. Her sisters teased her about how she loved to ramble and take over.

The oldest sister was tall and graceful. She wore green and yellow. Her silky hair blew in the wind.

One day, a handsome boy came into the field. He was a Mohawk and could speak to the animals and birds. Enchanted, the youngest sister followed him home.

The two sisters cried and searched for their lost sister. But, the next day, when the Mohawk boy appeared again, the middle sister couldn’t help but admire his handsome face. She watched him and, when he smiled at her, she followed him home.

The youngest and middle sisters were warm and cozy in the boy’s home. They were mesmerized by the Mohawk boy and forgot their older sister.

The oldest sister stood in the field waiting for her siblings. She didn’t droop or cry. Instead, she dried out. She became brittle and lost all of her color. Still, she stood in the field and her teeth chattered as the weather grew colder.

In the Spring, the Mohawk boy returned. He felt guilty when he saw what the older sister had become. It was his fault for bewitching her sisters. The boy brought them back to the older sister and transformed them all into plants so they could live together forever.

The middle sister became a squash plant. She spread out over the ground and her large leaves shaded the soil so weeds couldn’t grow and water would evaporate slower. Her prickly leaves kept the deer from approaching her sisters.

From that day on, the Native Americans have planted the three sisters together on a mound so that they will support each other and nourish the tribe.

There are many different versions of the Three Sisters, but most sources reference the Haudenosaunee. This term refers to the alliance among six Native American nations who were also called the Iroquois Confederacy. These nations were: Mohawk, Oneida, Onondaga, Cayuga, Seneca, and the Tuscarora.

The Haudenosaunee occupied an area overlapping both Canada and the U.S.A. Pronounced “hoe-dee-no-SHOW-nee,” the term means “people who build a house.” Family members of the same clan lived together in a longhouse. ( Smithsonian Educator guide)

“These three crops also helped provide Native Americans with a nutritionally balanced diet. The corn provided quick energy in the form of carbohydrates. The beans were rich in protein. And the squash helped supplement the diet with vitamins from the fruit and oils from the seeds.”

There are many gardening resources for planting a Three Sisters Garden. I found this one to be the most specific with regards to squash/bean varieties and planting times. This video is helpful and shows a traditional Native American fence. Some gardeners add sunflowers to attract pollinators. She is called the fourth sister and also provides sunflower seeds for protein.

Recipes and Ideas for Thanksgiving Meals

Add a Native American element to your Thanksgiving feast by serving succotash as a side dish. Succotash is a stew of corn, green or lima beans, and squash. It is  commonly prepared by the Haudenosaunee people.

Corn Soup continues to be a favorite meal among the Haudenosaunee and could be a light meal in the days following Thanksgiving. This version is made with hominy, which is made from dried kernels of field corn and available canned.

Corn Husk Doll Craft for the Kids on Thanksgiving

Corn husk dolls are a fun activity for the kids on Thanksgiving. You will need to purchase corn on the cob in advance so you can save the best husks and dry them. As an alternative you could purchase corn husks for tamales, but these aren’t as long as the ones found on corn on the cob.

There are several corn husk doll crafting videos on Youtube. I found this one to be the simplest version. However, this video has beautiful advanced examples of corn husk dolls from Mexico with corn silk hair. This resource is created by a Haudenosaunee woman and she tells the origin story of the corn husk doll.

Move past football and paper pilgrim hats this Thanksgiving. Honor Native Americans with stories, recipes and crafts of the Haudenosaunee people.