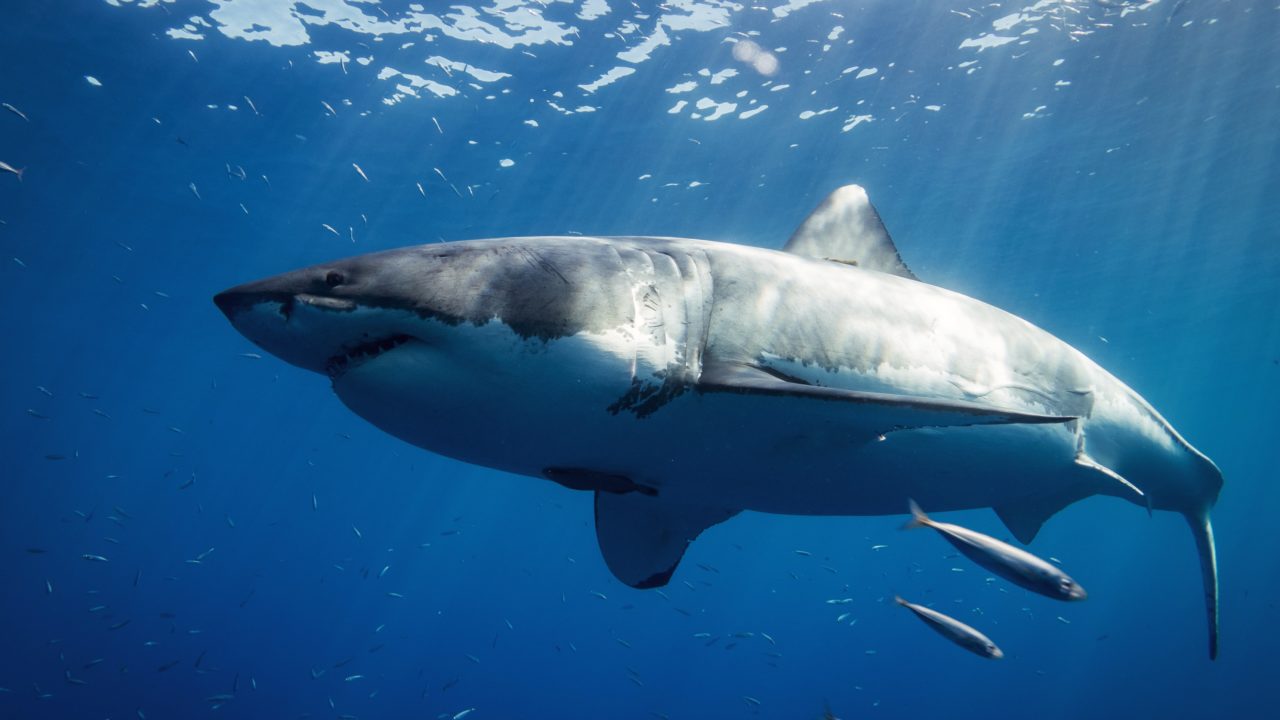 The Wayward Son of Kamohoalii, King of the Sharks

Kamohoalii was king of all forty species of sharks in Hawaii. They knew his most important taboo. Kamohoalii loved humans and  forbade sharks to eat them. But, just as in human societies, some individuals break the rules. Kamohoalii had an army of shark soldiers that patrolled for sharks that violated the taboo.

Kamohoalii’s love of humans extended to women. On the Island of Hawaii, where the Waipiao River entered the ocean, there lived a maiden named Kalei. She was the most beautiful young woman in the village. Not only did Kalei have thick, shiny black hair, but she had huge eyes with flecks of gold in their brown depths. Her skin glowed with health and her white teeth were always flashing a smile.

Kalei had an insatiable appetite for shellfish. While tradition mandated that women always go down to the beach in groups, Kalei ventured down by herself. Nothing would keep her from hunting among the rocks for mollusks and crabs. At the end of her collecting, she would always plunge into the cool waters of the Pacific.

One day, Kamohoalii spied Kalei as she swam. He had never seen a human as graceful. She spun and turned like a seal. She dove down and then shot up to the surface like a dolphin. Every day, Kamohoalli visited the beach at Waipiao to watch Kalei. She captivated him and he knew he had to have her as his wife.

One day, stormy weather kept all the villagers inside. Everyone that is, except Kalei. With her basket in hand, she went down to the beach to collect mollusks. Kamohoalii saw her approaching and turned himself into a handsome man. His broad shoulders, muscular torso, and friendly smile attracted her instantly. Yet, as a proper maiden, Kalei only gave him a small smile before continuing on her way.

Kamohoalii watched as she leaped from rock to rock searching for shellfish. The tide was high and the ocean was rough. Kamohoalii used his powers to send a rogue wave to knock Kalei into the ocean. She cried out as she felt the current pull her out to sea.

In an instant, Kamohoalii dove into the ocean and swam to her rescue. He towed her to shore and sat beside her on the beach as she struggled to catch her breath. Calm at last, Kalei turned to thank her hero. The gratitude in her heart intensified the spell he cast with his eyes. Like a bolt of lightning, Kalei fell in love.

The pair were soon married. Kamohoalii became a welcomed member of Kalei’s family. He thought that love was enough and he would be able to live the life of a human.

However, even a shark king can’t reign effectively from a distance. Kamohoalii would go fishing every morning before the sun rose. He would turn back into a shark and receive updates from his soldiers. Rogue sharks were becoming bolder. Humans were offering sacrifices and begging for his help from the attacks. Kamohoalii knew he had to return to his kingdom and leave his dear wife.

When Kamohoalii returned home, Kalei ran to the door to greet him.

“We are going to have a baby!” She said as she threw her arms around him. Kamohoalii hugged her but she could feel the tension in his body. “Aren’t you happy?”

Kamohoalii caressed Kalei’s face. His hands threaded through her hair and he kissed her deeply.

“Nothing could make me happier than knowing you carry my child. It will be a son. I want you to name him Nanaue.” She looked at him in confusion. “I know this because I am not what I seem.”

He told Kalei the truth about his dual life as a shark and a human. “It was your happiness and grace in the ocean that first attracted me to you. I need you to keep your joy even though I must leave you.”

Kalei said, “But I want to raise our son together.”

Kamohoalii shook his head. “It was selfish of me to leave and try and live my own life. My subjects need me. You must promise me one thing.” He held her face and stared into her eyes.

Kalei agreed to his taboo. The lovers spent their last night together. In the morning, when Kalei awoke, Kamohoalii was gone.

Time passed and Kalei went into labor. Her mother, grandmother and aunt assisted with the delivery. As the baby entered the world, her mother exclaimed with delight, “It’s a boy!” But then, as she turned the child over to clean him, the three women gasped.

“What is it? Let me see him,” demanded Kalei.

Her son appeared healthy with a thick head of hair. But, he had a horrible deformity. Located between his shoulder blades, was a tiny, toothless shark mouth.

Kalei hugged her son to her chest and told the women to get their husbands. When they arrived, she told her family the truth about Kamohoalii.

“My son is to be called Nanaue. He must never ever eat animal meat. Do you understand? This is a taboo set down by the shark king.”

Her family agreed to the taboo. Working together, they kept his shark mouth hidden. When he was a baby, it was easy to keep him wrapped in a blanket if they went out in public. Yet, as he grew it became a problem.

Due to the tropical climate, most Hawaiian men and boys wore only a loincloth, called a malo. To hide Nanaue’s shark mouth, Kalei would make elaborate mantles, or capes, for her son. She would pound the bark of a wauke plant to make a sheet of barkcloth, called kapa. She would then stain it green and blue with vegetable dyes and make patterns with bamboo stamps.

The villagers thought it was strange that Nanaue always wore a mantle. To make matters worse, he refused to play games with the other children and he sat off to the side. The kids didn’t know that it was because he worried about having his mantle pulled off. His mother never stopped warning him not to let anyone see his shark mouth.

Nanaue also refused to swim with anyone in the village. Bathing together in the Waipio River was an important community activity. People began to gossip at how anti-social he was. “If only he had a father, maybe he would be normal,” they whispered.

Late at night, Nanaue would go down to the river with his mother. She would sit on a rock holding his mantle as he slipped into the water and changed into a shark. Swimming down the river, he would enter the ocean. There he would catch fish and practice the stealthy hunting techniques of a shark. When finished, he would return to his mother. She would cover his shoulders with the mantle as he turned back into a boy.

Grandfather Takes Matters into His Own Hands

When a boy comes of age, he leaves his mother to join the men during mealtimes. Nanaue spent more and more time with his grandfather and uncle. Both men felt embarrassed as they watched Nanaue refuse to eat the dog and pork meat night after night.

Grandfather saw how Nanaue suffered and decided he was going to turn the teen into a great warrior.  He wanted to train Nanaue on wrestling and combat skills. But, he couldn’t because of the mantle.

Instead of warrior training, Nanaue was usually found in his mother’s garden. There, he could tend the taro plants, sweet potatoes and banana trees without worrying about revealing his secret.

Grandfather began to blame Kalei. “If she didn’t coddle him, he would be more manly. His father is a shark king! I know Nanaue could be a fierce warrior and then everyone would fear him. I wonder if Kamohoalii really made that meat taboo, or if Kalei wants to keep her son a weakling?”

The grandfather pressured Nanaue to eat meat. He gave in and loved the taste. In fact, his appetite became uncontrollable. Village men laughed and nicknamed him Manohae, which means “ravenous shark.”

Nanaue had another secret that he kept from everyone, including his grandfather and mother. His shark mouth had grown teeth.

Breaking the taboo triggered a hunger in Nanaue that village meals and nighttime fishing couldn’t satisfy. He soon found another source of meat.

Kalei’s garden was on the side of the path that led to the ocean. All his life, the boys he had grown up with had taunted him as they walked past on their way to swim. He had gritted his teeth but said nothing.

Fishing or swimming was their typical answer.

“Take care or you may disappear head and tail,” Nanaue would say.

It didn’t take long for the villagers to notice an alarming trend. One by one their teenage boys were disappearing. They would go out for a swim and then, without a shout or splash, they would be pulled underwater. In addition, adults, mostly the worst gossips and bullies, began to disappear.

Kalei figured out that Nanaue was behind the disappearances and warned him to stop. He didn’t listen to her. He loved the power he felt.

With his new confidence, he approached one of the Village girls as she stood on the beach.

“I was wondering if I could court you? I’ve been watching you since we were young,” he said and reached to take her hand.

The girl recoiled. “Get away from me! No one would ever date a misfit like you.”

Enraged, he spun around and the shark teeth tore through the mantle. The girl screamed. The villagers began to run towards them. Nanaue grabbed the girl and pushed her into the ocean. As she fell, he dove in and changed into a shark.

The girl scrambled to get away from him. The water was shallow and Nanaue thrashed to get deeper. Some men arrived and grabbed his tail. He tried to bite them but more arrived with clubs and began to beat him.

Kalei heard the screams and rushed to the beach. She called out,

Everyone froze as a giant shark shot up onto the beach and turned into a man. “Unhand him,” Kamohoalii shouted. Nanaue used the distraction to swim out to sea.

“Do not worry. My soldiers will deal with him. I apologize for my son. His grandfather ruined him, but I will discipline him. I promise that he will no longer attack this village.”

He started to go back into the water, but he turned when he heard Kalei whimper. Kamohoalii took her into his arms and embraced her. “I have missed you,” he whispered and kissed her. “Summon me again if you ever need me. I will come at once.”

The villagers understood the warning. No one would dare invoke the wrath of the shark king by attempting to punish Kalei or her family. With a regal nod, Kamohoalii walked back into the ocean and transformed into a shark.

As anyone with a wayward child knows, it is difficult to get a rebellious teen under control.

Find out what happens next in The Tale of Nanaue Part II.

Join my email list to read more mythology based on animals and nature.