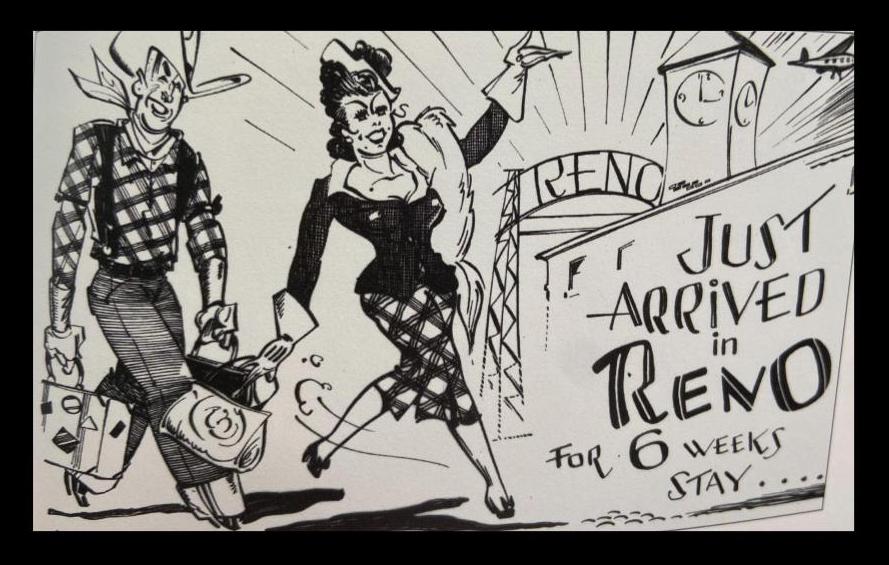 Once famous as the “Divorce Capital of the World”

Reno, located near Lake Tahoe and the California-Nevada border, was once called the Divorce Capital of the World. Today, historic buildings and the Nevada Historical Society Museum safeguard the history of the original “Sin City.”

Nowadays, divorce is so common that we forget that it used to be difficult to obtain one. Until the late 1900s, to obtain a divorce, a spouse had to prove–with evidence–that their partner had committed adultery, abused or abandoned them. Wealthy people could travel to Paris or  Mexico City, but most of the United States placed legal challenges in the way of estranged couples seeking freedom.

Reno came to the rescue. Nevada had the easiest divorce laws, and Reno was conveniently located on the transcontinental railroads and highways that connected New York to San Francisco. People came from all over the United States to end their marriages and, frequently, to tie a new knot.

The divorce trade was a big part of Reno’s economy until the 1970s, when California passed the first no-fault divorce law and other states followed.

Between 1910 and 1970, Reno was known as the Divorce Capital of the World. Songs, articles, plays and novels were written about the divorce trade. “I’m going to Reno,” became a euphemism for getting a divorce.

“Coming to Reno to get a divorce was known as ‘taking the cure’ or getting ‘Reno-vated.’”

Nevada’s marriage and divorce laws were established in 1861 by the territorial legislature, before it won statehood in 1864. It required a six-month residency period and did not require extensive evidence of wrongdoing.

Reno became a marriage and divorce destination. In 1927, Reno lowered the resident requirement to three months. Then, to ease the economic strain of the Great Depression, they lowered it to six weeks in 1931.

“The quickie marriage industry brought more people to Nevada, but the residency requirement for divorce had a greater financial impact.”

Many people who traveled to Reno would combine a divorce with a new marriage. Marriages outnumbered divorces in the 1920s and 30s. It was an easy place for Californians to go for a quick elopement and to avoid the three day waiting period required for marriage licenses. Nevada required no waiting period, no physical exam and no blood tests.

The entertainment options in Reno grew as Hollywood elite and wealthy people waited out their divorce residency requirements. Celebrities who came to get “Reno-vated” included: Mary Pickford, Jack Dempsey, Estelle Taylor, Eddie Fisher, Arthur Miller and Cornelius Vanderbilt. They created their own divorce colony for socializing and organized tours to local attractions.

Divorces were obtained at the Washoe County Courthouse. Designed by Frederic DeLongchamps, the building is Classical Revival with Beaux Arts influence. He incorporated the original 1873 courthouse into the design. Construction was completed in 1910.

According to Reno folklore, many divorced people would leave the courthouse and throw their wedding rings into the Truckee River while standing on the Virginia Street Bridge. It was called “The Bridge of Sighs” or “Wedding Ring Bridge.”

The original Virginia Street Bridge was built in 1905. It was designed by architect John B. Leonard in a Classical design. It was one of the first reinforced concrete bridges in Nevada. However, it was demolished in 2015 due to a new flood control plan. Its replacement was designed to have the rhythmic arches of the old bridge and four historic light fixtures were restored for use on the new bridge.

Waiting Out the Residency Requirements

To assist with the six-week residency requirement, the Riverside and El Cortez Hotels were built. In addition, local residents rented out rooms and some divorcees stayed in campgrounds. Monte Cristo Ranch and Valley Ranch were two dude ranches promising to entertain the divorcees while they waited.

An artifact of this time period still remains at 1461 Lander Street. These were originally part of El Reno apartments and rented by divorcees as they waited out their residency requirement.

Constructed in 1937, the original fifteen Lea Steel homes were made of prefabricated components designed by the prominent Los Angeles architect Paul Revere Williams. Williams was the first African American architect to become a member of the American Institute of Architects in 1923.

Originally located on South Virginia Street, they were sold off individually and relocated. These two buildings are currently vacant and rundown. The cottages are on the 2022 Watch List of the Historic Reno Preservation Society.

Chapel of the Bells

George Flint opened Chapel of the Bells in 1961 on Fourth Street. It was a house he converted into a wedding chapel. At the time, it was one of only two wedding chapels in Reno. It closed in 2020. It was purchased by Jacobs Entertainment to be part of its redevelopment project.

Near the Chapel of the Bells is the Reno Red Neon Line District Project. Created by Jacobs Entertainment, this redevelopment project has collected classic neon signs from Reno’s history and refurbished them.

Young Electric Sign Company (YESCO) is the neon signmaker responsible for the restoration, fabrication and installation of the nine historic signs.

Neon signs are a  part of American history and it is wonderful to see them conserved. If you are a neon sign aficionado, check out my other articles on the Neon Museum in Las Vegas, and How to Bend Neon at the Museum of Neon Art in Los Angeles.

At first glance, Reno may appear to be a tired town. But, any location can be interesting if you dig into its history.

I came to appreciate Reno after visiting the Nevada Historical Society museum. This is a gem of a museum. Be sure and visit if you are curious about the gambling, railroad and ranching history of the area. The museum also has an exhibition on the Indigenous People of the region. In addition, the Historic Reno Preservation Society website provides thematic self-guided tours of the city.