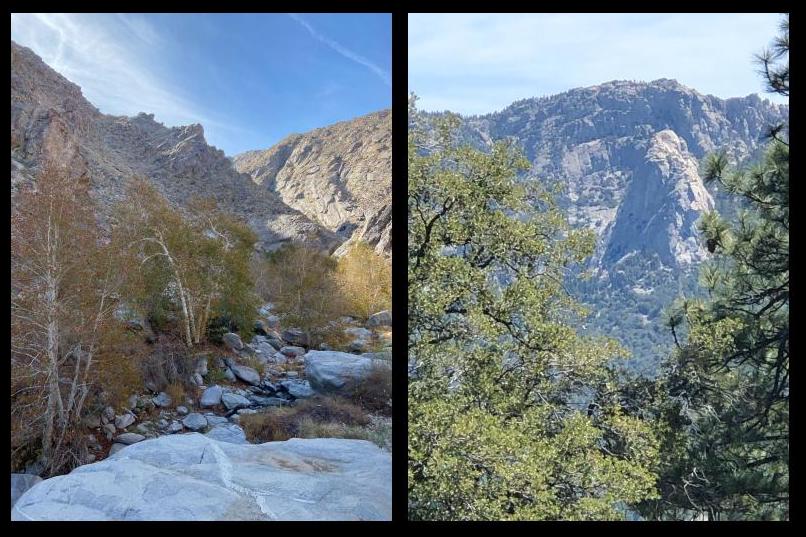 Palm Springs and Idyllwild Geography Named After an Evil Shaman

In Palm Springs, hikers can explore Tahquitz Canyon on a two mile loop trail that leads to a waterfall. In Idyllwild, rock climbers can challenge themselves on Tahquitz Rock, which is also called Lily Rock.

The names of both geographical features are explained in the legend of Tahquitz, the evil shaman who once lived with the Cahuilla. The Cahuilla are bands of Native Americans who have lived in the inland areas of Southern California for 3,000 years.

The Legend of Evil Tahquitz

Mukat was one of the twin creators of the world and of the Cahuilla people. He gave Tahquitz magical powers and made him the first shaman. At first, Tahquitz helped his people and taught them how to gather food and predict the weather. He could suck illness out of individuals and blow the evil away.

But, for reasons no one knows, evil crawled into Taquitz’s heart like a scorpion. He went up into the Moreno hills and practiced wicked magic until he became powerful enough to fly. Eventually, Tahquitz returned to his people in Palm Springs, but he hid his vile thoughts from them.

As shaman, he would still visit the sick and kneel over them to heal them. But, instead of sucking out the evil, Tahquitz would suck out a little bit of the essence of the person. The people began to notice that, for the first time, illnesses did not heal but, instead spread throughout the tribe. Hunters found animals lying dead and looking like dried husks.

The people knew that a dark force had descended upon the tribe. One day, the Creator Mukat made bows and arrows. The people saw the arrows on the ground, their sharp points glistening in the sun. They refused to touch them.

“Don’t be afraid,” laughed Tahquitz. “Arrows can’t harm you. Look!” Tahquitz held an arrow in two hands and plunged it into his stomach. He pulled it out and there was no wound. “Watch this!” He picked up another arrow and stuck it through his head. He laughed and danced to show he felt no pain.

Excited, the people picked up the bows and arrows and began to shoot them at each other. They thought it was a game. The dust rose as they ran and played. But, when the arrows were gone and the dust settled, many men lay on the ground. The others tried to wake them up, but they couldn’t.

“You tricked us, Tahquitz!” The people chased him up into the canyon and banished him from the tribe forever.

Tahquitz fled to the waterfall and then flew up into the San Jacinto mountains. He made his cave inside Tahquitz Rock, above Idyllwild.

The reason the rock looks white is that Tahquitz turned the walls of his cave into transparent stone. Even today, he sits in his cave, ruminating on his banishment. He can see through the walls and he watches humans in the world below.

Tahquitz is always hungry. He feeds on the souls of the living. At times, he enters the hearts of sleeping people and spreads his poisonous thoughts. He causes car wrecks and plane crashes. Tahquitz delights in anything that brings harm to the people.

When he is angry, Tahquitz causes earthquakes, droughts, wildfires and flash floods. You can hear him in the thunder and see his eyes flashing in the lightning of a desert storm. Sometimes, in a rage, he hurls rocks down the mountainside. That is why you still see fresh landslides of giant boulders in the canyons and on the hillsides.

Tahquitz Abducts a Maiden to be his Wife

In the early days of his banishment, Tahquitz would come down into the canyon and watch the Cahuilla people from a hidden spot.

One morning, at dawn, while the moon was still reflecting in the water, Tahquitz saw a beautiful maiden plunge into the green tree pool to take a bath.

Tahquitz’s heart filled with lust and longing. He had to have her as his wife! Tahquiz leaped out of the bushes and captured her before she had time to call out.

He flew back to his cave in Tahquitz Rock. The girl cried and begged him to release her, but he refused.

“You will be my wife here in this cave. You will sit beside me and together we will feast upon the souls of the living. Power and magic will make you happy,” Tahquiz said.

But the girl loathed her husband. She tried to starve herself, but he forced her to eat his horrid fare. She wept night and day. Her hair grew thin, her skin grew pale, and her body grew rawboned.

He kept her prisoner for two years. But one day, for reasons no one knows, Tahquitz looked at his wife and the lust in his heart changed to pity.

“I will take you back to your people. But, you must promise that, for three years, you will not tell a soul about what happened to you or your life with me.”

“Oh, yes! I promise not to tell anyone,” said the girl. Tahquitz stared at her with his evil eye and she knew he would kill her if she broke her promise.

Tahquitz picked her up, flew down the mountain and returned her to the green tree pool in Tahquitz Canyon where he had first abducted her.

The girl returned to her family. At first, everyone was happy to see her because they had given up hope of ever finding her. But, when they asked her where she had been she refused to answer. Day after day, they pestered her.

“I can not say,” was always her reply.

Every moment of every day, the village elders, her parents, her friends all demanded to know where she had been and what she had been doing. She could feel their love turning into suspicion. Her secret isolated her from her people.

Finally, she could take it no longer. Although she knew Tahquitz would kill her, she told the people to assemble in the large house and she would tell them the truth.

She stood before her people and told of her abduction at dawn and how Tahquitz had taken her to his cave. Tears fell from her eyes and dripped off her chin as she told them how she begged for her release. Her people made murmurs of sympathy.

“And, even though I tried to resist, he forced me to be his wife.” She heard a gasp from the people and angry growls from the men. “And, then, then…he forced me to eat the souls of the living with him.” She looked up and saw horror on the face of every man, woman and child.

People drew back to avoid touching her as she walked out of the large house and to her own lonely bed. As she lay down, she welcomed death. Anything would be better than the revulsion of her people. Tahquitz killed her that night in her sleep.

The Cahuilla people warned each other not to hike in the canyon alone or at night. They feared the spirit of Tahquitz and his evil ways. However, hippies, hikers and the homeless have long been attracted to the waterfall and stream.

Tahquitz Canyon was officially closed in 1969 after some teenagers spray painted and vandalized the canyon. However, you could still sneak inside it. When I first moved to the desert in 1990, I went for a hike alone in the canyon. I didn’t know anything about the Tahquitz legend at the time. But the canyon felt evil and scary. Homeless people lived in the bushes. As a 22 year old woman, I knew the danger I was in and left.

I returned later that year with my husband. Together, we hiked up the canyon to the falls. I felt eyes upon us the entire time. I wasn’t comfortable and could still sense danger in the air.

Despite this, the stream was flowing and plants were in springtime bloom. The falls rushed down the granite wall and filled a pool at the bottom. My husband and I saw a yellow and black garter snake swimming in the pool. I had never seen a snake swim before. Only his head stuck out of the water like an elephant’s trunk!

In 2001, the Agua Caliente Band of the Cahuilla Indians built a visitor center and improved the trails. They have rangers patrol and the canyon is closed at sunset. There is a $15.00 fee for hiking Tahquitz Canyon. My husband and I returned to the canyon in November this year.

Although the waterfall was dry, the hike was delightful. Sycamore trees displayed fall colors and the oak trees had acorns. Hummingbirds sipped from red Chuparosa flowers. Due to the fee, the trail wasn’t overrun with hikers and the canyon felt peaceful. I am happy to say that any sense of Tahquitz’s menacing presence was gone.

The visitor center has a good collection of books on the Cahuilla and California Native Americans. My retelling of the Tahquitz legend was based on the film shown in the center and the book titled The Cahuilla Indians by Harry C. James. I also used Stories and Legends of the Palm Springs Indians by Francisco Patencio and Margaret Boynton and the L.A. Times.