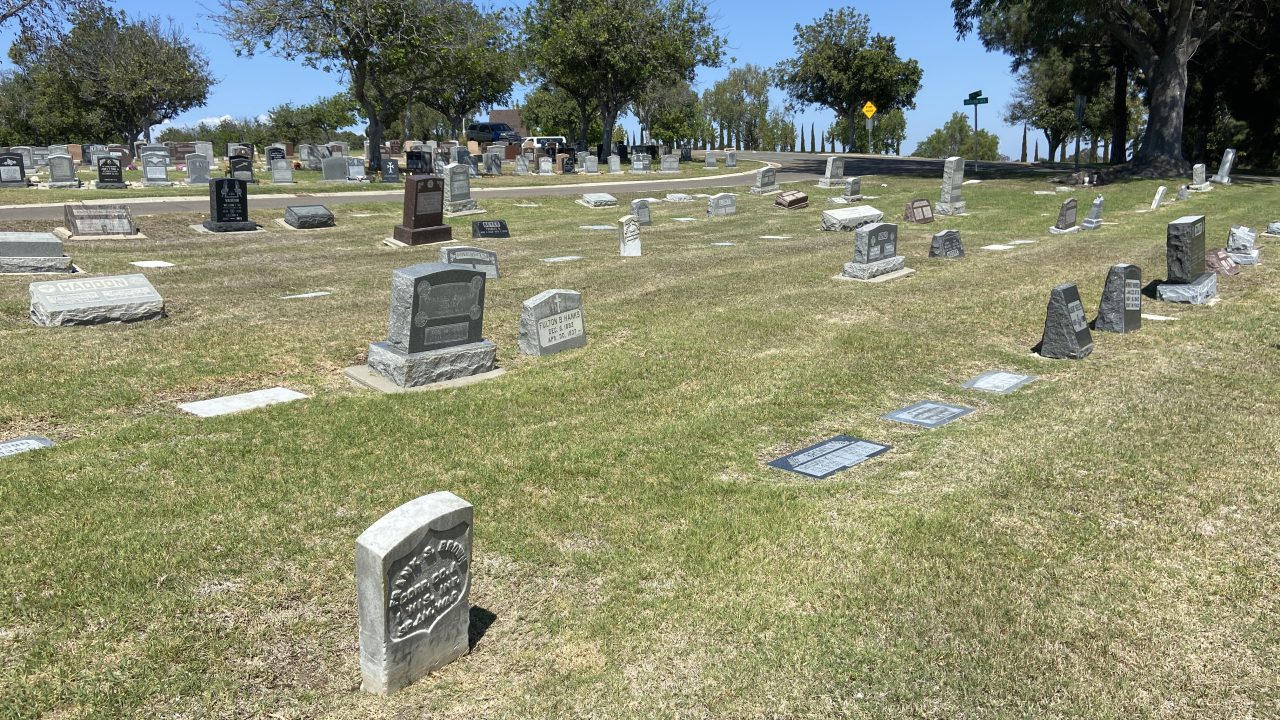 Mt. Hope Cemetery, in the City of San Diego, is “A Public Cemetery for all People.” It was founded in the fall of 1869 by a citizen’s committee headed by Alonzo E. Horton. Horton is known as the “father of San Diego,” so it is appropriate that the founding fathers and mothers of San Diego can be found eternally resting in Mt. Hope Cemetery.

My entire life I have loved to visit cemeteries–it isn’t a macabre or ghostly interest–I love graveyards because they capture history and put life in context.

At a cemetery you can see the graves of the famous and realize that even celebrities end up in the same place.

Memento moire, remember that you too will die. The Stoicism movement speaks of this often, but the concept has been around since civilization began.

At the gravesite of famous San Diego settlers, like Alonzo Horton, Kate Sessions, George W. Marston and Ah Quinn, I am reminded of how much one person can accomplish–and how many lives can be changed–in their one short life.

It makes me think of the line from Mary Oliver’s poem, “The Summer’s Day.”

Doesn’t everything die at last, and too soon?

Tell me, what is it you plan to do

With your one wild and precious life?

Listed below are some of the important San Diegans buried at Mt. Hope Cemetery and a brief description of what they accomplished. However, each of these individuals could, and often is, the topic of an entire biography.

Alonzo Horton was the “father of San Diego” and a man of vision. When Horton arrived in San Diego, the City was located in what is now called Old Town. It was situated near the San Diego River and the Mission de Alcala, which was founded in 1769. Horton thought the City of San Diego would be better beside the San Diego Bay.

He divided up his land into lots and gave a bucket of whitewash to anyone who promised to build right away. It wasn’t long before the white buildings of San Diego could be seen from the Bay.

Horton also had the foresight to have the city set aside 1,400 acres for a city park. This was renamed Balboa park in 1910. He built a luxury hotel, the Horton House, when the city only had a population of 3,000 people. The Horton House was replaced by the U.S. Grant, but Horton also built The Grand Hotel. It was saved from demolition in the 1980s and moved to its present location and renamed the Horton Grand.

Alonzo Horton’s dreams for his beautiful city were realized. His funeral was attended by 800 people and it was the largest one held in San Diego up to that time.

Kate Sessions, “the Mother of Balboa Park,” filled San Diego with plants from around the world. She first came to San Diego in 1883 to be a teacher, but did not enjoy it. She became a partner in the San Diego Nursery. She also opened a flower shop and had growing fields in Coronado, Pacific Beach and Mission Hills.

She wrote horticultural articles for the San Diego Union-Tribune between 1891-93. She explained how and when to plant particular flowers, trees or shrubs and assisted home owners in understanding San Diego soils and how best to beautify their yards. She also wrote for California Garden, a publication of the San Diego Floral Association (the oldest garden club in Southern California.)

From 1892-1902, Kate Sessions had an experimental nursery and garden in the City Park (later renamed Balboa Park.) The deal was that the land had to remain open to the public and Sessions was responsible for all fencing and irrigation.

In lieu of rent, Sessions was responsible for “planting 100 trees a year in the park and also furnishing annually to the city 300 ornamental trees in crocks or boxes to be used by the city in park, street, plaza or school ground planting.” Many of the trees planted by Sessions still grow in Balboa Park.

In 1897, Sessions recommended planting Cocos plumose palms in Horton Plaza, in the heart of downtown. Many of these palms still grow in Downtown and Balboa Park and were raised from seeds in her nursery.

In 1899, Sessions took over management of the Hotel del Coronado’s botanical gardens. She also opened a bougainvillea-covered house in the center of the hotel courtyard to sell flowers.

San Diego celebrated Arbor Day for the first time on March 7, 1904. A school holiday was declared and 2,500 schoolchildren and 4,000 adults planted trees in City Park under Session’s supervision.

In 1915, Kate Sessions was appointed supervisor of agriculture for San Diego City Schools. She was responsible for landscaping the schools and teaching horticulture and botany to the children. Each school was required to have a garden for children to grow vegetables and flowers.

In 1915, San Diego renamed the park to Balboa Park in honor of the Panama-California Exhibition. By the time the exhibition opened, over 1,200 varieties of plants had been brought in to add to the beauty of the trees and lawns. Sessions secured her title as the “Mother of Balboa Park.”

Ah Quinn was called the “unofficial mayor of ChinaTown,” and was one of the founding fathers of San Diego. He was born in Southern China in 1848, and attended American Missionary School in Canton so he spoke excellent English. In 1868, southern China was going through a severe economic crisis. Ah Quinn left for America, which the Chinese called “Gold Mountain,” to earn money and send it back to his family.

He lived in San Francisco and then Santa Barbara. On a visit to San Diego in 1881, he met George Marston, one of the founding fathers of San Diego. Marston asked Ah Quinn to move to San Diego and help organize laborers for the railroad construction.

Ah Quinn assisted with the railroad and also opened a store catering to the Chinese, which were excluded from many professions in California. He bought land in Mission Valley and Bonita and helped local Chinese men form truck farms and then sold their produce at Quinn Market. He married and had 12 children, and his son was the first Chinese boy born in SD.

Ah Quinn was widely respected in both the Chinese and white communities and played an important role as a liaison. He translated Chinese in court cases. He worked with health inspector Walter Bellon to help clean up the Stingaree in 1912.

Ah Quinn kept detailed diaries in both Chinese and English for 25 years (1877-1902) and these have provided an invaluable record for historians. He changed the lives of many Chinese residents of San Diego.

George White Marston, called “The First Citizen of San Diego,” was responsible for the beauty and urban planning of America’s Finest City. Marston arrived in San Diego in 1870, at the age of twenty. He got a job working as a clerk for the newly opened Horton House Hotel.

In 1872, he became a storekeeper and eventually owned the dry goods part of the company by 1878. Marston Company became San Diego’s leading department store and it made him wealthy.

The building his store was in at 509 Fifth Avenue is still standing. He was there 1881-96. In 1912 he opened a six story department store occupying the entire block on the north side of C Street between Fifth and Sixth Avenue. Sadly it was demolished in the 1960s.

Marston used his wealth to support his passion for urban planning. He opened the first Reading Room in San Diego and eventually became a trustee for the public library.

Marston ran for mayor of San Diego twice but was defeated because his opponents called him “Geranium George.” At the time, there was a debate for the City’s future called Smokestacks vs. Geraniums. Opponents said Marston favored urban planning and civic beauty over smokestacks (industry.)

“It is absurd to say that I am not in favor of industrial development. I believe in a Greater San Diego–everything that makes for a bigger city. Let us build a great city on a good foundation. Let us have our industries as large as possible. Let us build a complete city.”

San Diego owes an enormous debt to Geranium George. In 1902, he spent $10,000 of his own money so that the Park Commission could hire a landscape architect, Samuel Parsons.

Later Marston paid for the City to hire John Nolan, the first city planner in the United States. Nolan had studied under Frederick Law Olmstead Jr. and graduated from Harvard School of Landscape Architecture.

Marston founded the San Diego History Center, the YMCA, and was a trustee of San Diego Normal School (which became SDSU.) He used his own money to establish the Serra Museum and preserve Presidio Park. He was also instrumental in creating Torrey Pines and Anza Borrego Desert State Parks.

Elisha S. Babock was one of the original founders of Coronado and the Hotel del Coronado. Babcock and his partners (Story and Gruendike) bought the entire isthmus of Coronado for $110,000 in 1885.

Elisha Babcock and Hampton Story created the Coronado Beach Company, and then established additional businesses to support the town such as a ferry company, water company, railroad company and electrical power plant.

As soon as they chose the site for the Hotel del Coronado, they laid out the city plan of Coronado’s parks, civic areas, commercial zones and streets. Babcock and Story also started a nursery and began planting trees.

The real estate boom went bust and Babcock and Story ran out of money. In 1890, John D. Spreckles became the owner of Coronado and the Hotel del. Elisha Babcock became the manager of the Hotel del and later left to practice law.

In 1903, Babcock allowed the Marine Biological Association to use the Coronado boathouse as a summer laboratory. That Association later went on to become the Scripps Institution of Oceanography.

Besides his Coronado contributions, Babcock was also a civil engineer and involved in water projects. The supply of water has always been a huge hurdle for the development of San Diego. Babcock was the principal owner of Otay Water Company. This is the company that built the Sweetwater Dam, which was finished in 1888. Babcock eventually sold his interest to John D. Spreckels.

Thomas and Anna Whaley were a pioneering family of Old Town San Diego. Their brick home still stands today and is among America’s Most Haunted Houses.

Thomas Whaley made his money in San Francisco, but moved to San Diego after an arson-set fire destroyed his home and store. Thomas married Anna in 1853. She was an accomplished pianist and a famous local hostess when the couple was wealthy.

Whaley built his home in 1856 and it was called “the finest new brick block in Southern California” by the San Diego Herald.

In 1858, another arson-set fire destroyed his Old Town Plaza business. San Diego was going through an economic bust period so Whaley moved back to San Francisco. He and Anna returned to San Diego in 1868, after an earthquake.

In 1885, their daughter Violet committed suicide and died in the Old Town house. Grief stricken, the parents moved to a new house on State Street in downtown San Diego. Thomas Whaley opened a real estate office and was involved in entrepreneurial businesses in San Diego until his retirement in 1888.

Their other daughter, Lillian Whaley, ultimately returned to the Old Town house. She kept detailed diaries of her life in San Diego covering 1886-1953. These have been an important resource for historians.

The Mt. Hope Cemetery has the gravesites of other famous San Diegans, including Thomas Nesmith and George James Keating. Raymond Chandler, famous for his L.A. Noir crime novels, is also a writer in (permanent) residence.

Located close to Downtown, Mt. Hope Cemetery is a quiet place for reflection on life and death.