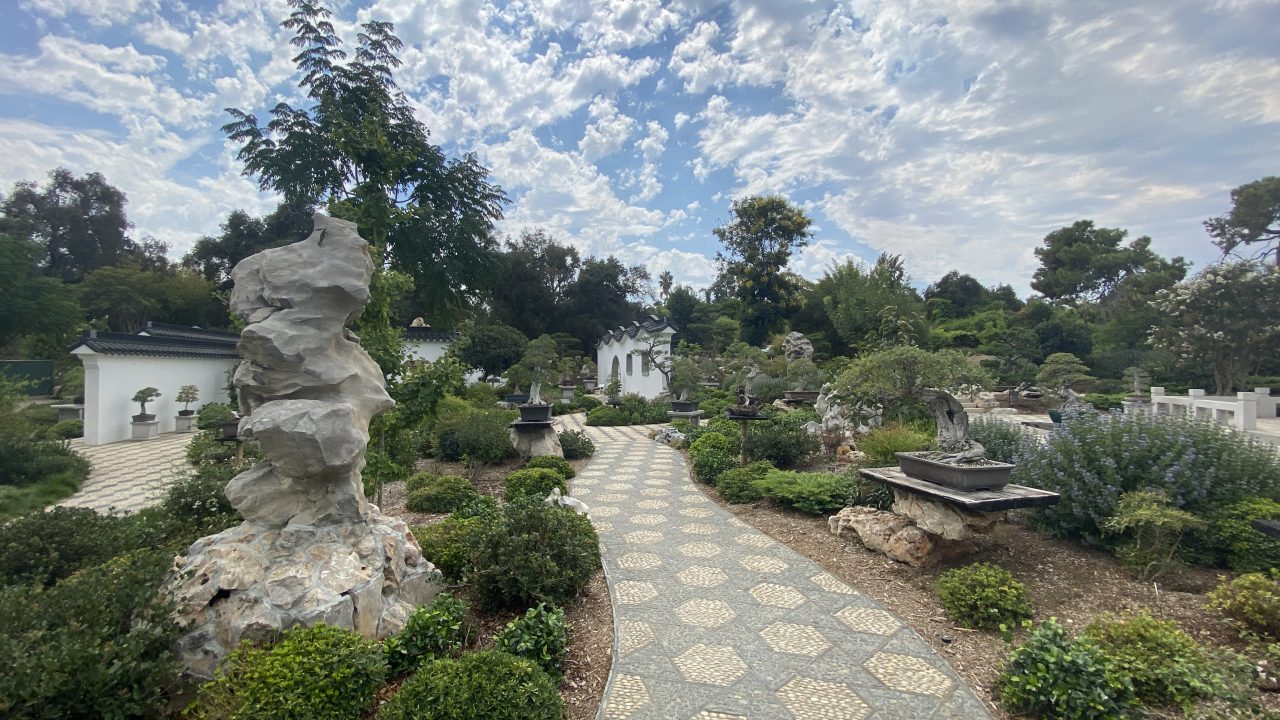 The Chinese Garden at the Huntington is an exquisite example of garden design that weaves together culture, literature and horticulture.

On your next visit to Los Angeles, plan on spending a day at the Huntington Library, Art Museum and Botanical Gardens. Better yet, spend the entire day in the gardens!

Located in San Marino, right next to Pasadena, the Huntington was founded in 1919 by Henry E. Huntington. He was the nephew of the famous California railroad baron, Collis P. Huntington.

Henry made his fortune in real estate and the famous Pacific Electric Red Cars which linked undeveloped acreage in the suburbs with downtown Los Angeles. By 1901, Pacific Electric had more than 1,150 miles of track connecting Los Angeles to San Bernardino, Riverside and Newport Beach.

Henry retired in 1910 and dedicated his time to developing a 600 acre ranch he had purchased in San Marino. Huntington wanted to turn it into a monument of art and culture. He hired William Hertrich, a young botanist and landscaper, to convert the raw ranch land into an estate filled with exotic plants. Hertrich served as superintendent from 1904-1947.

The Chinese Garden is the newest of all the botanical areas. It opened in 2008, long after Hertrich had passed away. It is on the southeastern edge of the park and easy to skip because the other gardens are more centrally located. The Chinese Garden is one you don’t want to miss!

Green Chinese characters trail down the face and blue sky shines through round holes.

As a Westerner, I stand in awe and seek the scientific explanation–what type of rock is this? What do the characters mean? What made the holes?

By diving into the safety of science, I reject that initial feeling of energy–which was exactly what the rock was designed to invoke.

“Prized individual specimens,…[of] the towering stone…were seen as embodying energy-like ethers, or qui. To Suzhou garden makers, rocks are not static bits of matter; rather, their contorted forms are dynamic expressions of the energies that created the cosmos.”

The Garden of Flowing Fragrance brochure

A garden infused with a spiritual design that you can feel–if you are willing to be the observer and not take refuge in facts.

A garden where symbolism is embedded in the plants and hardscape.

A garden designed so that every view is like a painting with a frame, foreground, middle ground and background.

“Each step through the garden’s pathways and pavilions reveals a new view as if a painted scroll were being unrolled scene by scene.”

Inspired by the Gardens of Suzhou in China

The Chinese Garden is called Liu Fang Yuan, the Garden of Flowing Fragrance.  The name came from a third-century poem called the “Rhapsody on the Goddess of the Luo River.” The poem describes the subtle fragrance that trails in the goddess’ wake as she walks among scented herbs.

The design of the Garden of Flowing Fragrance was inspired by the gardens of Suzhou, a city located near Shanghai in southeastern China. Many of the features of the garden were modeled on specific Suzhou gardens.

“During the Ming dynasty (1368-1644), wealthy scholars and merchants there built tasteful private gardens combining architecture, waterworks, rockeries, plants and calligraphy…Historically, these gardens served both as places to retreat from the pressures of daily life and as spaces in which to socialize…and …create.”

The Garden of Flowing Fragrance brochure

Construction and Design of the Chinese Garden

The twelve acre Chinese Garden officially opened in 2008. However, the master plan was developed by designers in Suzhou in the early 2000s. Liu Fang Yuan’s pavilions, paths and rockeries were developed after years of international collaboration.

American architects ensured the garden plan was seismically sound and met all building codes. The visible hardscape elements were installed by Suzhou artisans, but beneath their fine handwork lies the concrete and steel foundations and framework installed by American construction workers

The rock that inspired me is a type of limestone traditionally harvested from the bed of Lake Tai. They are called Taihu rocks after the lake. They are now also quarried in various regions of China.  These rocks have long been prized for their strange shapes and holes.

“Taihu rocks are seen variously as monumental mountain peaks, human and animal figures, or even objects of meditation and adulation.”

Over 850 tons of rocks were imported for the garden and carefully positioned by Chinese craftsmen. In addition to the monumental pieces, they also line stairways and are used to create a grotto.

In Chinese garden design, a man-made rockery, or mountain, represents stability and endurance. Water and rocks echo yin and yang. This concept refers to elements of a balanced nature and is part of both Daoist and Confucian thought.

The paving tiles in the Chinese Garden are actually mosaics made of small stones. Each section of the garden has paving in a unique pattern which adds both textural and visual interest. It echoes the idea of focusing on the small individual details in the midst of the larger picture.

“It can be said that in China, there is no classical garden without water. If there is a garden, there will be water in various forms.”

In Chinese gardens, water bodies often mimic existing rivers, lakes and oceans. This represents the charm of nature and symbolizes the embodiment of life.

Water itself has no color, yet it reflects the colors of the plants and sky. It is a negative space–a mirror reflecting and duplicating a scene. Yet, it is also a positive space holding carp, water lilies and lotus.

Bridges and water divide the space into scenes and create spatial and artistic composition.

The sounds of water evoke different emotions and can be used to create a specific tone in each garden setting.

The plants in the Chinese Garden were carefully chosen based on their symbolism. For example, the orchid stands for humility and the lotus for purity.

“The three friends of the cold season” are plants which represent perseverance through challenges. Pine is evergreen, bamboo never breaks, and the plum trees flower in the winter when other plants are dormant.”

The white camellia is called the yuming flower. It is symbolic of the virtues of a high-minded individual with great moral principles.

Other plants were selected based on literary references.

“For my part, I reserve my love for the lotus alone, rising unsullied from the mud, bathing in the clear ripples but never with meretricious intent, wholesome within and straight from a branch, its fragrance growing ever more pure as it spreads about, standing tall and erect, to be observed from afar but not dallied with up close.”

Many plants in western nations are also symbolic. For example, the mistletoe growing on oak was symbolic to the Celts. For the Cahuilla, a California Native American people, the California Fan Palm was symbolic. The Victorians had an entire language of flowers.

When you first enter the Chinese Garden, the wave topped wall catches your attention. Like so many shapes and forms in the garden, it somehow soothes your mind.

“The undulating tiled roof recalls the serpentine form of a dragon, an auspicious creature that legend says lives in the water but rises up to the clouds to bring rain…It is one of the most important architectural elements in the garden, beginning modestly and culminating in the formal entrance.”

Throughout the garden there are latticed windows, each with a unique pattern. Door openings and windows create a perfect frame–turning the view outside into a landscape painting. The theme these windows express is one of both separation from–and glimpses of–the world on either side.

The Jade Ribbon Bridge is carved from solid granite which came from Jin Shan, or Gold Mountain, in Suzhou. The granite was hand-carved. To meet building codes, the railings on each side are higher than they would be on a traditional Chinese garden bridge.

The boat-shaped pavilion is one of the first things you notice in the scenic “painting” upon entering the garden. It is called “waveless boat” because Chinese literature uses this term to describe a serene atmosphere–a boat gliding over calm waters.

Poetry is written in Chinese characters on the pavilions of the garden.This is a characteristic of all Suzhou-style gardens. The poetic couplets were written by more than 30 contemporary artists from mainland China, Taiwan, Hong Kong, the U.S. and the U.K.

Visit the Other Gardens

“While the collections in the Library and Art Galleries hold still for study and admiration, the plants of the gardens grow, bloom, shed, and grow again…Every season repays new attention.”

The Huntington Botanical Gardens are the ultimate destination for garden lovers. The classic original gardens, designed by William Hertrich, are filled with Greek gods and goddesses and other works of art. I was thrilled by how many statues there were of Aphrodite and Artemis in both the gardens and in the library museum.

There are so many rose gardens in the world, but the one at the Huntington is unique. Not only do you see heritage roses of all varieties, but there is even a section of roses that are named after Hollywood celebrities–how very L.A.

The Japanese garden with its arched bridge, bonsai and raked gravel provides a fascinating contrast with the Chinese garden.

If you live in Southern California, or are planning an extended trip, make time to visit the Huntington Library, Art Museums and Botanical Gardens. They are right next to Pasadena which is a mecca for architecture lovers.

The City of Pasadena epitomizes a commitment towards repurposing historic buildings and protecting civic heritage. It is the perfect place to spend the night and have your meals.

Speaking of which, dining opportunities at the Huntington are limited. You want to be sure and pack a picnic lunch. It can also get hot in Pasadena so bring a water bottle and wear sunscreen.

At the entrance of the Chinese Garden you can find brochures explaining each section and translating the poetry. There is also an audio tour app available on the Huntington website for downloading. The best resource is to find a docent in the garden. I only spoke with one briefly, but she sparked my fire for garden design.